In February 2018 the UN agreed with the Israeli government and the PA to undertake a joint review of the temporary Gaza Reconstruction Mechanism (GRM) to improve its functionality, transparency and predictability. In consultation with a variety of stakeholders, the parties introduced various improvements to the GRM in January 2019 and these are expected to facilitate the implementation of humanitarian and development projects.

As part of the blockade it has imposed on Gaza since the takeover by Hamas in 2007, citing security concerns, Israel restricts the entry of materials it considers to have a ‘dual-use’ civil and military capacity, including basic building materials. Established following the 2014 hostilities, the GRM was a temporary mechanism agreed by Israel and the PA to expedite the entry of materials into Gaza for reconstruction purposes, while acknowledging Israel’s security concerns.[1] At the request of the parties, the UN facilitates the import of materials via this monitoring mechanism, while at the same time advocating for a full lifting of the blockade in accordance with international law and consistent with Security Council Resolution 1860. 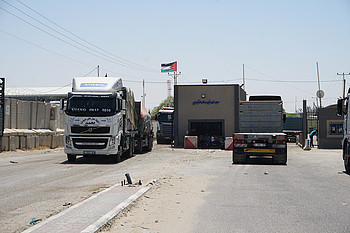 As highlighted in chart 1, since its inception, the GRM has facilitated the entry of large quantities of cement and other building materials for the reconstruction and repair of housing and infrastructure.[2] The decline in cement imports during 2018 is due to a number of factors unrelated to import restrictions: the general economic decline in Gaza, reduced donor funding and the fact that the reconstruction process is drawing to an end. Nearly 100,000 people were displaced due to the destruction or severe damage of their homes during the 2014 conflict, but more than 85 per cent of these homes had been rebuilt by the end of 2018.[3] As illustrated in chart 2, the import of dual-use items other than building materials has been more challenging and unpredictable, impeding the implementation of urgently needed interventions, especially in the field of water and sanitation (see case study).

These improvements agreed to the GRM are expected to significantly enhance the effectiveness of the mechanism by streamlining applications and approval for large-scale projects, and of items defined by Israel as having a dual civilian and military use. The parties also agreed to improve the GRM by expanding the number of contractors and businesses allowed to import materials; providing increased access for donors to monitor their projects; adopting clear deadlines for approving projects; clarifying procedures for imports of dual-use items; and other technical adjustments to make the mechanism more user-friendly and help stimulate economic activity. The Israeli authorities have committed to processing all dual-use items within 45 working days, in addition to providing better links between the GRM and Israeli mechanisms for the review of requests (see case study).

The UN has established a Project Management Unit (PMU) in Gaza to work with all relevant stakeholders and collect information about current and potential projects; to identify opportunities for interventions achievable within short timeframes; to address blockages and delays to facilitate the smooth implementation of urgent projects; and to assist project implementers with all issues related to the GRM. The PMU has already started its support to the implementation of a package of urgent economic and humanitarian interventions for Gaza agreed by members of the Ad Hoc Liaison Committee (AHLC) at its last meeting in September 2018.

The PMU is well-placed to facilitate the smooth implementation of various humanitarian projects. These include finalizing the reconstruction of buildings damaged in the 2014 conflict, plus the construction and rehabilitation of infrastructure and service provision facilities, including in the critical energy, water and health sectors. The PMU is already working closely with humanitarian agencies and partners in Gaza to advance projects through research, data collection, technical advice and support for the coordination of imports.

Cement import to Gaza per year via Kerem Shalom (tons) 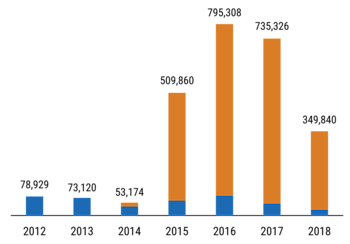 Following the 2018 GRM review, the Israeli authorities confirmed that, in future, all such ‘dual-use’ items would be processed within 45 working days and that better links would be developed between the GRM and alternative channels to provide a more consistent performance. The UN’s Project Management Unit (PMU) will also ensure in future that GRM project managers have a single focal point to obtain their materials from, and that blockages in the process are proactively identified and resolved in a coordinated manner.

Number of items approved per quarter 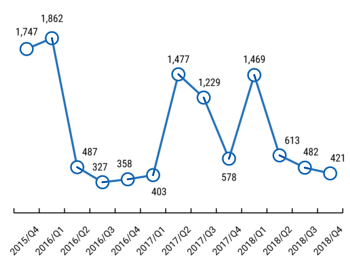 In January 2016, the European Union approved funding for a project to improve the quality of water pumped to some 50,000 people in the al-Satar and al-Amal areas of Khan Yunis governorate. The project consists of two water tanks with a capacity of 5,000 cubic meters each, to be connected to the main pipelines and supplied by desalinated sea water. Implementation was awarded to a private contractor under the supervision of Gaza’s Coastal Municipalities Water Utility (CMWU) and was scheduled to be completed by January 2017.

The project required 116 different items designated as dual-use. An application for the import of these items was filed with the GRM in January 2016. It took some 18 months for all of the approvals to be granted. In addition, the contractor was obliged to obtain additional clearance for 33 specific items, including chemicals and telecommunications equipment, through a separate mechanism run by the Israeli authorities and which lacks the accountability of the GRM: these items were finally approved in January 2018. As a result, completion of the project was rescheduled for the second quarter of 2019, more than two years behind the date scheduled.

Salah Salama is the Mukhtar of al Amal neighbourhood in Khan Yunis.

“Al Amal neighbourhood has 40,000 residents, of whom more than 35,000 are unemployed. The residents only receive water for between 2-4 hours each day, which is not enough for family needs. Most of the time this coincides with electricity cuts, which hinder pumping even when water is available.”

The water supply is salty and residents buy water from private providers. “We have 20 persons in our house and are obliged to buy around 3,000 liters of drinking water a month at a cost of NIS 60. I can afford this but most people can’t. People in difficult economic circumstances are forced to drink the available pumped water, which is undrinkable, or get water from those who can afford it.”

“I’m a nurse and I volunteer at an Nasser hospital in Khan Yunis three days a week. Many patients there suffer infections due to drinking salty water. We really need desalinated water to prevent the health issues most of the residents suffer from.”

[2] An interactive database with information about materials and projects processed, see: GRM website