Published as part of
The Monthly Humanitarian Bulletin | June 2019

For the past decade, the Gaza Strip has suffered from a chronic electricity deficit that has undermined already fragile living conditions. The situation deteriorated further after April 2017 due to disputes between the de facto authorities in Gaza and the West Bank-based Palestinian Authority (PA), which has been ongoing since the takeover of Gaza by Hamas in 2007. The failure to resolve a longstanding dispute between the two Palestinian authorities on issues related to tax exemption for fuel and revenue collection from electricity consumers resulted in the PA reducing payments for electricity in Gaza. Compounded by a halt in the electricity supply from Egypt due to malfunctioning and inability to repair the feeder lines, this triggered electricity blackouts of 20-22 hours a day.[1] The power shortages had a severe impact on essential services such as health, water and sanitation services, and undermined Gaza’s fragile economy, particularly the manufacturing and agriculture sectors. During this period, the UN coordinated the delivery of donor-funded emergency fuel for generators to ensure the operation of some 250 critical health and WASH facilities.

Additional fuel for the GPP has been available since October 2018 following the provision of US$60 million in funding from the Government of Qatar. This has enabled an electricity supply of 14-15 hours in a 24-hour period versus less than seven hours previously, as indicated in the graph below. The boost in the electricity supply has led to a general improvement in otherwise deteriorated living conditions in Gaza. Expenditure on fuel by households and businesses to operate back-up generators has been reduced and the delivery of basic services, water and sanitation has improved. It has also reduced the need for emergency fuel supplies provided by the UN to avert the collapse of basic services.

Based on the Qatari funding, the GPP was expected to maintain operations at this increased level up to April 2019. However, in May 2019, the Government of Qatar pledged $180 million of additional funding to provide “urgent humanitarian relief support for the UN programmes in Palestine and support for electricity services”[2], which will allow the UN to provide fuel for the GPP until the end of 2019.[3]

Availability of electricity per month (average hours per day) 2018-2019

Despite the extra fuel supply since the end of 2018, electricity supplied through the Israeli line and the GPP combined met less than half of Gaza’s power demands in the first six months of 2019.[4] In addition, fuel deliveries can be susceptible to the security situation in Gaza and essential services remain at risk. The most recent example occurred on 25 June, when incendiary balloons launched from Gaza caused 13 fires in southern Israel, following which, the Israeli authorities suspended fuel deliveries to the GPP from 25 to 29 June.[5]

Power interruptions impede the functioning of health facilities and hospitals, jeopardize essential services, including intensive care and haemodialysis services, affect operating theatres and also pharmaceutical and vaccine storage. In February 2019, the Gaza Electricity Distribution Company (GEDCO), in agreement with the Ministry of Health, provided additional electricity from the main grid through extra electricity lines to nine of the 14 public hospitals in Gaza. Power availability in the nine hospitals increased significantly from an average of 13 hours per day in the first three months of 2019 to 22 hours per day in April and May.

Improvements to the electricity supply are crucial for sustaining critical lifesaving services but the health sector in Gaza remains highly dependent on fuel to run back-up generators during power cuts. To reduce reliance on donated fuel and build the resilience of the health sector, the World Health Organization (WHO), the World Bank, the International Committee of the Red Cross (ICRC) and other Health Cluster partners have been working to provide the main public hospitals with alternative energy sources. 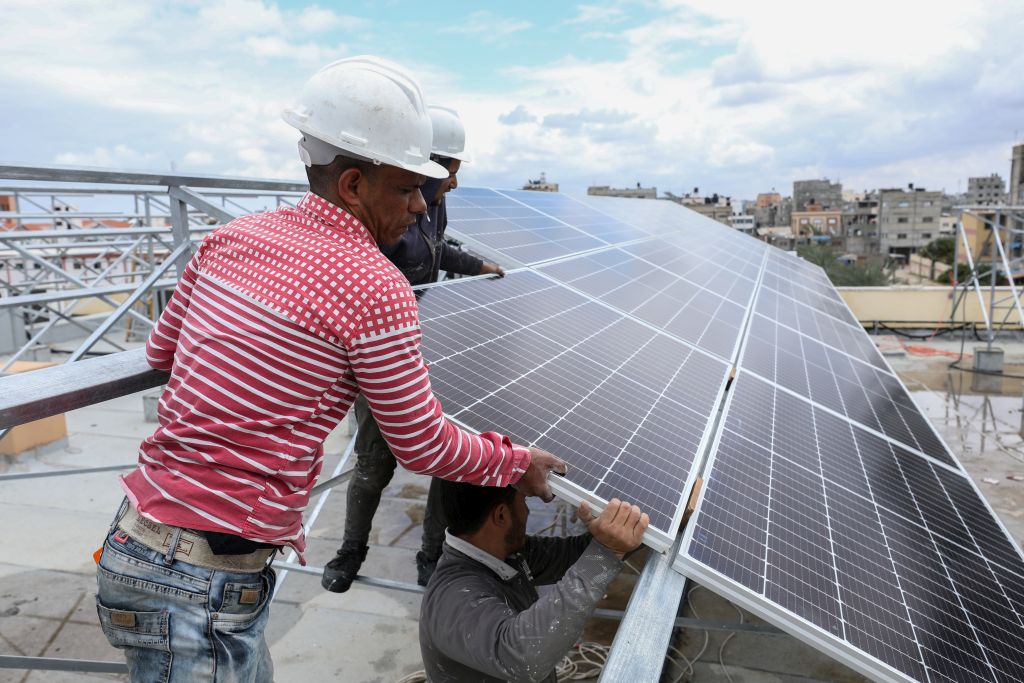 On 17 June 2019, the World Health Organization (WHO) and implementing partners inaugurated a new solar power plant at Nasser hospital, one of the key hospitals in Gaza that serves an estimated 27,000 patients per month. Funded by the Government of Japan, the 250 KWp solar plant provides 420 MWh of clean energy annually and is expected to save around 166,000 litres of fuel. The project implementation was coordinated with the International Committee of the Red Cross (ICRC) and the World Bank that also committed to supporting the Nasser hospital solar electrification. These joint efforts will cover around 17 per cent of the hospital’s power needs.

The energy generated by the solar panels will significantly reduce reliance on emergency generators and donated fuel. It will also build the resilience of the health system to withstand future shocks. Thanks to this intervention, some 19,000 patients per month now have access to lifesaving and life-sustaining health services, including an estimated 12,300 women attending the emergency department, 136 patients in need of haemodialysis and more than 158 newborn babies in the intensive care unit. However, to ensure the full energy resilience of hospitals and the broader health sector, a comprehensive approach to ensuring sustainable energy supplies is required and further investment in upgrading the electricity supply infrastructure in Gaza.[6]

“Interruptions in energy supply have created an enormous challenge for the health sector in Gaza, putting the lives of the most vulnerable patients at risk. The solar electrification of Nasser hospital is an important step towards ensuring a more sustainable power supply to health facilities”, said Dr Gerald Rockenschaub, head of the WHO office for the occupied Palestinian territory. “We are grateful to the Government of Japan for funding this initiative that also contributes to building a more resilient health system and environmental sustainability in Gaza.”

The United Nations Development Programme (UNDP) and the Government of Japan, in partnership with the Palestinian Ministry of Health, Palestinian Energy and Natural Resources Authority (PENRA) and the Japan International Cooperation Agency (JICA), inaugurated the solar energy system project in May 2019. The project targeted healthcare laboratories in four hospitals: Beit Hanoun hospital in the north, al-Helal al-Imarati hospital in Rafah, al-Najjar hospital in Khan Yunis and Shuhada al-Aqsa hospital in the central Gaza area.

This project is worth $500,000 and will provide more than 470,000 Palestinians in Gaza with improved access to healthcare services by providing 85 KWp of sustainable electricity supply for four laboratories; this represents a 50% saving in energy consumption. Additionally, 540 old fluorescent lamps were replaced with new LED ones.[7] 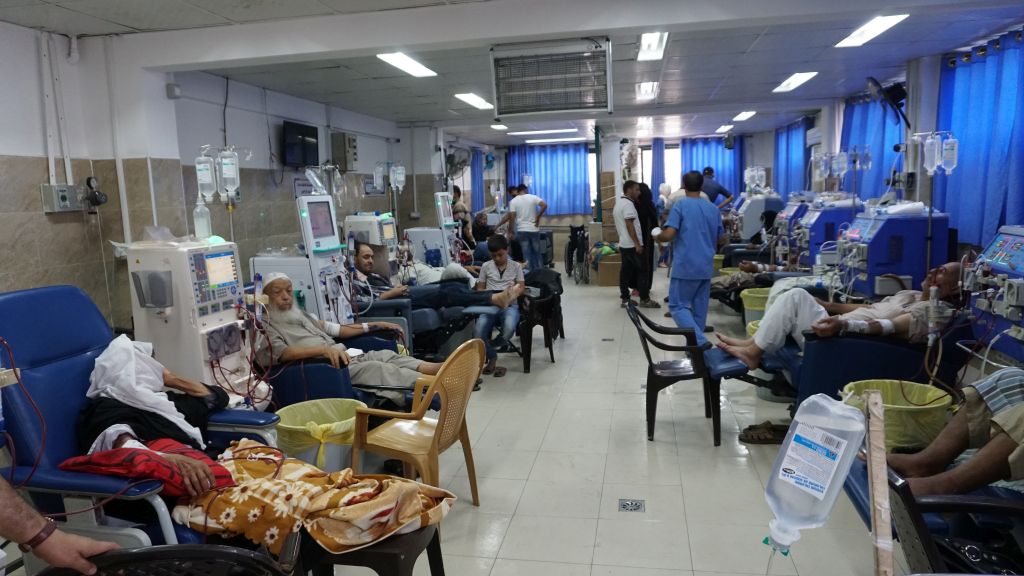 Personal Story: ‘’The significance of this project is that it reduces our dependence on fuel and decreases CO² emissions.’’ 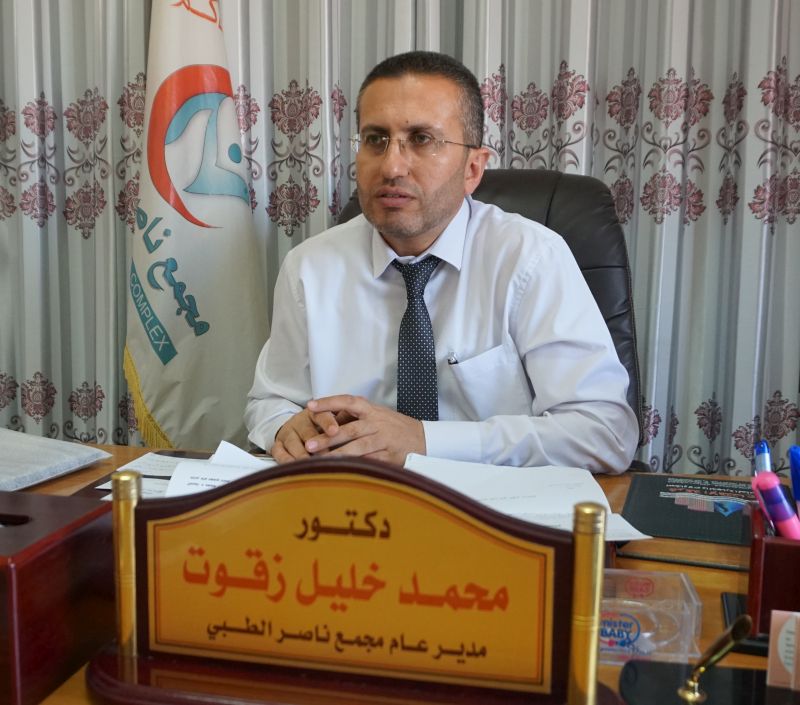 Dr Mohammed Zaqout is head of the Nasser Medical Complex in Khan Yunis, the largest medical complex in the Gaza Strip. Operational from 1960, it includes the first orthopaedic department in Gaza and the biggest laboratory in the oPt. In addition to being an educational institution with a computerized system for patients, it supports other hospitals by providing them with services such as dialysis and catering.

“Power cuts have been a huge problem for us. The medical equipment was always breaking down and we have only one engineer whose role is purely preventive. We could barely afford new devices and these eventually broke down because of the electricity issue. We also experienced shortages of fuel for the back-up generators and UPS batteries. On one occasion a child was admitted to the hospital after falling from a building. The power was cut and the generator didn’t work so we had to use the lights on our mobile phones to carry out CPR and save his life.

“Fortunately, there has been a significant improvement in the electricity supply in the past few months and we now have 20 hours of electricity from the grid. The medical staff report that equipment breaks down less than before and they feel less pressure from disruption of their work, being obliged to postpone surgeries and the overall negative impact on the quality of their care.”

Despite the efficiency of the project, not all the medical equipment can function on the solar system.  According to Sobhi Qishta, head of the engineering and maintenance unit in the hospital: “Our overall power needs are around 1800 Ampere and we used to have up to 20 hours of power cuts. The new solar power plant provides around 350 Ampere. The importance of this project is that it reduces our dependence on fuel, decreases CO² emissions, and also the cost of oil and maintenance for the generator.” 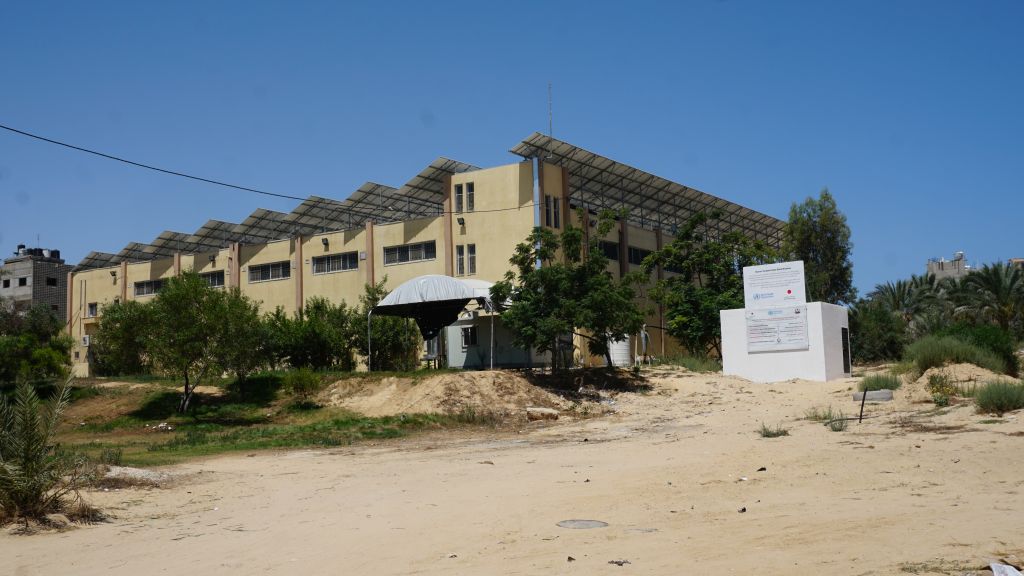 [1] In previous years, GPP operation was also undermined by the halt in the smuggling of Egyptian-subsidized fuel through tunnels after 2013; limited collection of payments from consumers; the destruction of fuel storage tanks by an Israeli airstrike in July 2014; and restrictions on imports of spare parts and equipment under the Israeli blockade.

[2] HH the Amir Directs Allocation of 480 Million USD in Support of Palestinian People,7 May 2019

[3] Nickolay Mladenov Special Coordinator for the Middle East Peace Process Briefing to the Security Council on the situation in the Middle East, 22 May 2019

[7] With Funds from the Government of Japan - UNDP Inaugurates Renewable Energy for All Project in Gaza, 30 May 2019