Humanitarian snapshot: casualties in the context of demonstrations and hostilities in Gaza | 30 March - 7 June 2018

Since 30 March 2018, the Gaza Strip has witnessed an enormous increase in Palestinian casualties in the context of mass demonstrations taking place along Israel’s perimeter fence with Gaza. The demonstrations have occurred as part of the ‘Great March of Return’, a series of mass protests, expected to continue up to 8 June. The large number of casualties among unarmed Palestinian demonstrators, including a high percentage of demonstrators hit by live ammunition, has raised concerns about excessive use of force by Israeli troops. Gaza's health sector is struggling to cope with the mass influx of casualties, due to years of blockade, internal divide and a chronic energy crisis, which have left essential services in Gaza barely able to function. 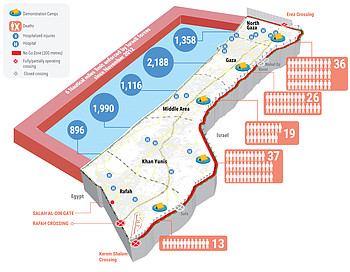 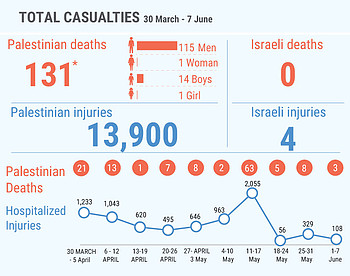 * This figure includes 17 Palestinians (two of them children) killed in unclear circumstances during the 14 May demonstrations, as well as 17 Palestinians (including one child) killed since 30 March in contexts other than demonstrations; among the latter are six people whose bodies are being reportedly withheld by the Israeli authorities.

Source of Palestinian casualty data: Palestinian Ministry of Health in Gaza Data as of 7 June 2018.

Disclaimer: Data and analysis provided in this snapshot is based on preliminary information available. Further assessments are pending.