Humanitarian snapshot: Casualties in the context of demonstrations and hostilities in Gaza | 30 Mar 2018 - 31 July 2019

Since the 30 March 2018, the Gaza Strip has witnessed a significant increase in Palestiniain casualties resulting from the start of the Great March of Return demonstrations. In addition other activities along Israel’s perimeter fence have resulted in increased levels of casualties.   This snapshot captures the number of casualties since the start of the Great March of Return on 30 March 2018.   The large number of casualties of unarmed Palestinians, the use of live-ammunition and the imapct of tear gas canisters all raise concerns of excessive use of force.   Exposure of children to violence and the lack of protection for medical personnel are additional concerns. 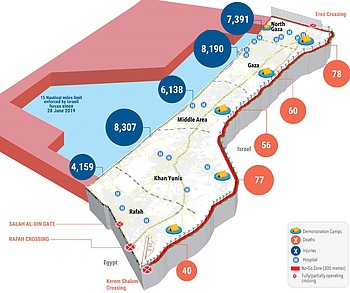 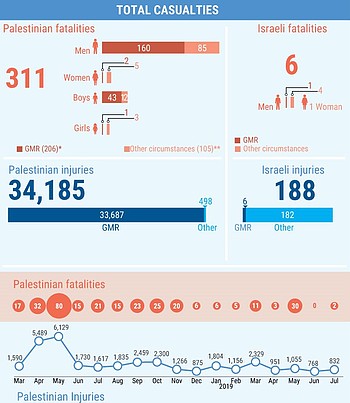