A foreword by Robert Piper, the Humanitarian Coordinator for the occupied Palestinian Territory

As the Israeli military occupation of the Palestinian territory (oPt) enters its 50th consecutive year, humanitarian needs remain high. Poverty and unemployment have driven more than a quarter of all households into food insecurity; an estimated one million people are in need of health and nutrition interventions; and 1.8 million people require some form of protection assistance. Overall, nearly half of all Palestinians living across the West Bank, including East Jerusalem, and in the Gaza Strip – some two million people in all – will need some form of humanitarian assistance in 2017.

Two years after the 2014 round of hostilities and nine years into the blockade, humanitarian needs in Gaza remain particularly acute and humanitarian services provided by the international community remain a life-line for 1.1 million people. Around 65,000 people are still displaced from the 2014 escalation, hospitals and primary healthcare services struggle to function without adequate stocks of lifesaving medicines and supplies, and farmers and businesspeople face numerous obstacles to restart their livelihoods. Access to clean water and electricity is sporadic for most inhabitants. Seventy per cent of the Gaza population has access to running water for only a few hours, every two to four days – most of which is not potable – while most of Gaza’s households receive electricity only six to eight hours daily. Increased restrictions on permits to exit Gaza/access the West Bank and beyond are also taking a toll on patients in need of essential medical treatment as well as aid workers.

Accountability for violations of international law by duty bearers on both sides remains elusive, denying victims and survivors the justice and redress to which they are entitled. Sadly, the past year also saw continued tensions in the oPt, with sporadic airstrikes and tank shelling attacks on Gaza and an increase in live ammunition injuries of Palestinians in the West Bank. Added to this was a sharp increase in demolitions of Palestinian homes and infrastructure in the West Bank, including East Jerusalem.

Against this backdrop, we nevertheless saw the overall funding response for our humanitarian programmes reduce compared to the previous year, jeopardizing the delivery of critical assistance for those in need, whether they struggle to rebuild their lives in Gaza, protect their rights or access essential services in East Jerusalem or in Area C of the West Bank. We hope 2017 will be more successful in this respect.

The protracted protection crisis in the oPt stems from a stalled political process and recurring cycles of violence. A lack of respect for international law continues to drive the vulnerability of Palestinians, creating a man-made humanitarian crisis that has gone on for far too long. This Humanitarian Response Plan (HRP) for 2017 represents our best effort to shield vulnerable civilians from the impact of this protracted disaster.

* This article was published as a foreword to the Humanitarian Response Plan 2017. 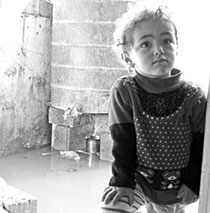 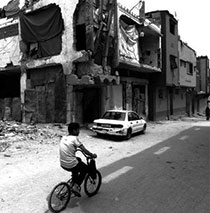 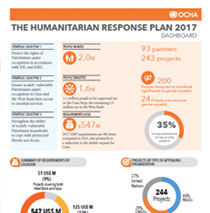