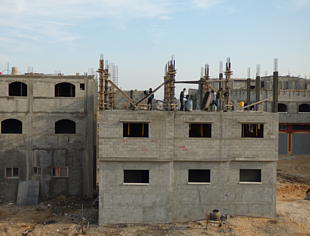 As the reconstruction of homes destroyed in Gaza during the 2014 conflict progresses and further pledged funding becomes available, issues have emerged related to the housing, land and property (HLP) rights of affected families and urban planning.

HLP issues are evident in the Shuja’iyeh neighbourhood to the east of Gaza City, which was one of the most devastated areas: 24 per cent of the 11,000 totally destroyed homes in Gaza were located here. The Norwegian Refugee Council (NRC) estimates that only 20 per cent of the land in this area is registered in the name of the current owner.[i]

Registration of land may have been deterred by the expenses involved and the difficulties in obtaining the full range of ownership documents. Some owners lost property deeds in the conflict, while others hold incorrect registration numbers for land plots. The absence of a proper land survey makes it difficult to confirm the boundaries of land parcels and can lead to disputes. In addition, many properties are subject to ongoing inheritance proceedings due to the death of owners, including some who died during the 2014 conflict.

It is vital to ensure support for families who are struggling with documentation issues that could prevent them from receiving reconstruction assistance. In addition, many people built their homes without building permits form the Gaza authorities, resulting in a lack of proper urban planning and public spaces. The fundamental issue now is whether to rebuild these areas quickly as they were before, resulting in overcrowding, inadequate infrastructure and a lack of public spaces, or to Build Back Better[ii] in a way that meets the community’s needs, resolves previous problems and creates a better living environment. Reconstruction presents an opportunity to mainstream women’s HLP rights, strengthen civil society and ensure long-term improvements.

Post-conflict reconstruction in other contexts proves that the process is as important as the end result.[iii] Some promising projects are currently underway: UN-Habitat, in partnership with the NRC and the Palestinian Housing Council, has engaged in participative spatial planning in the heavily damaged area of Khuza’a, including consideration of future development needs. In Beit Hanoun, the Ministry of Public Works and Housing, with support from the Italian Development Cooperation Agency (AICS), is implementing a positive example of community-based participative planning for the reconstruction and rehabilitation of over 200 units in An-Nada and the neighbouring Al-Izba community, and the rehabilitation of 19 partially damaged buildings.

Extensive reconstruction implemented within a reasonable timeframe, and providing a durable solution to the plight of displaced people, is essential to reduce vulnerability, enable the realization of human rights, and to avoid an environment conducive to a new round of violence. However, addressing complex problems takes both time and human and financial resources. Alongside consideration of key HLP issues,  other measures required include the removal of restrictions on imports of building materials and equipment; a solution to the internal Palestinian divide to allow the relevant Palestinian authorities to discharge their government functions effectively; the involvement of affected populations in the reconstruction of their community; and expedited disbursement of funds pledged by donors for the reconstruction of Gaza.

In April, OCHA published the key findings of an inter-agency re-registration and vulnerability profiling survey carried out from mid-August to December 2015 among internally displaced persons (IDPs). The survey targeted over 16,000 households whose homes were destroyed or severely damaged during the 2014 hostilities and collected detailed information on their current living conditions and needs. The full results of the survey have been made available to all relevant actors in a unified database that is intended to enhance humanitarian coordination, programming and advocacy.

[iii] “The tendency…was for government, donors and the media to focus on the number of houses constructed as a measure of achievement. However, the most successful programmes acted as a catalyst for recovery… paving the way for future development.” Lessons from Aceh, p. 9.