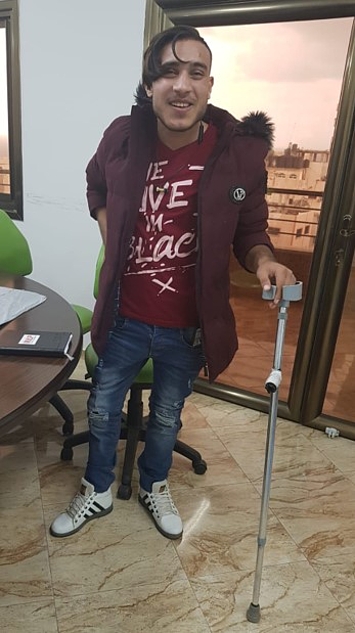 Ibrahim* is a 20-year-old Palestinian, who finished high school, loves playing football and dreams of becoming a psychologist one day. He used to support his family by working in construction or farming, and as a lifeguard. But, according to Ibrahim, on 23 March 2018, this all changed: he was shot in the legs by Israeli forces while farming, near Israel’s perimeter fence around the blockaded Gaza Strip, where a Palestinian demonstration was taking place nearby.

Following his injury, Ibrahim underwent surgery and had a fixator applied to his leg. “When I woke up,” he recalls, “I looked at my leg, and thanked God it hadn’t been cut off. My mom was crying next to me, so I wiped her tears and told her ‘don’t be sad, Mom, I will be fine’”. However, his months-long recovery did not go well. Ibrahim was referred for follow-up treatment that was not available in the coastal enclave, but was twice denied access by the Egyptian authorities and was too scared to get treatment in the West Bank because that would have entailed going through Israel.

In September 2018, with funding received from the Humanitarian Fund for the occupied Palestinian territory (oPt HF), Ibrahim became one of 1,200 people receiving help, from Medical Aid for Palestinians (MAP) and the Ideals charity, with limb injuries they suffered. In October, he underwent another surgery and began walking without crutches.

This successful intervention brought back hope to Ibrahim, who concludes:

* Not his real name

Addressing the needs of Gaza patients on the waitlist