The humanitarian context in the oPt has a differentiated impact on men, women, boys and girls. Gender analysis assists in identifying groups of the affected population that should be prioritized in the humanitarian response, defining their humanitarian needs based on the differentiated impact, and ensuring gender responsive humanitarian interventions that mitigate negative coping mechanisms prioritizing needs of people with disabilities, divorced or widowed women, adolescent girls and boys, and the elderly. Gender analysis also expands on household level vulnerability from a focus on female-headed households to include also households with high dependency ratios, headed by a person with a disability or a person in detention, married women who are in a separated or polygamous marriage, and widows and divorcees without secure tenure rights.

Over the course of 2017, a number of clusters have made significant efforts to deepen their understanding of gender based vulnerabilities, and ensure a more gender sensitive determination of humanitarian needs. Nonetheless strengthened efforts continue to be needed to improve quality of sex and age-disaggregated data, and to systematically collect information on the impact of gender-based vulnerability using participatory and inclusive needs assessment tools.

Applying the framework for analysis of gender based vulnerabilities, the 2018 HNO identifies the following gender concerns and associated needs based on the differentiated impact of the humanitarian context on men, women, boys and girls, their differentiated access, and differentiated coping mechanisms. In addition to the needs that are briefly outlined in this section, gender analysis has been incorporated throughout the cluster-specific narratives in Annex I, as appropriate. 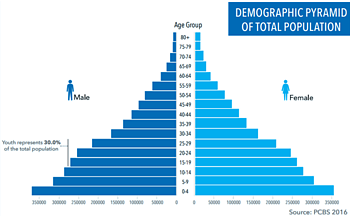 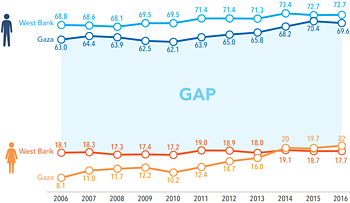 Unemployment rate by gender and location 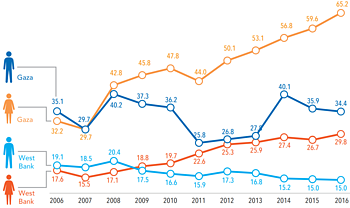 Access to income, food, services and assets are amongst the key components of resilience. Women in the oPt are particularly disadvantaged with regard to these components given their limited share of agricultural holdings, their restricted access to services, and the limited economic opportunities available for women to generate income. This disadvantage restricts women’s ability to contribute to  household resilience and food security, and also increases the vulnerability of women and female-headed households to food insecurity and malnutrition.

According to a recent study by the Shelter and NFIs Cluster,[15] limited knowledge within vulnerable groups such as widows, women heads of households, and women with disabilities, of the services offered by different humanitarian actors and the terms and criteria for receiving assistance often results in unequal access to these services, and ultimately to humanitarian responses that fail to consider age, gender and location.

[3] UN Women-OCHA Factsheet “The Gaza Strip: The long-term impact of the 2014 hostilities on women and girls, December, 2015”. According to a research conducted by the Women’s Affairs Centre in 2016 in Gaza, 59 per cent of the research respondents (total of 988 women with disabilities) have suffered of one form of violence, 31 per cent have reported being subjected to neglect and house confinement, 23.8 per cent were denied the right to get married and start a family. While confronted with many legal and psychosocial challenges, 91 per cent of the respondents had never received legal services and 33.9 per cent believed that the availability of psychosocial support was limited. A 2016 study by YMCA in the West Bank revealed that 39 per cent of the women with disabilities (respondents) were abused, out of which 37 per cent was domestic abuse, 34 per cent community abuse, and 28 per cent abuse by the Occupation. Physical abuse accounted for 49 per cent, while emotional abuse accounted for 81 per cent.

[8] UN Women - UN OCHA: Needs of women and girls in humanitarian action in Gaza: Gender Alert for the 2016 Response Plan.

[10] GBV Sub-Cluster: The Humanitarian Impact of Gaza’s Electricity and Fuel Crisis on Gender-based Violence and services, 2017.

[12] UN Women: Navigating Through Shattered Paths: NGO Service Providers and Women Survivors of Gender-based Violence. An Assessment of GBV Services in Gaza. 2017, to be published.

[13] UN Women - UN OCHA: Needs of women and girls in humanitarian action in Gaza: Gender Alert for the 2016 Response Plan.

[15] Report of the Secretary-General on the Situation of and Assistance to Palestinian Women (1 October 2015 to 30 September 2016), available here.