Published as part of
The Monthly Humanitarian Bulletin | October 2019

This article is based on information provided by the UN Food and Agriculture Organization.

“I have been fishing since I was ten years old and fishing is the only source of income for my wife, myself and our 10 children,” said Fadi, a 44-year-old fisher from Gaza city.[1]

On 1 April 2019, the Israeli authorities expanded the permissible fishing area along the southern and central parts of Gaza’s coast from six up to 15 nautical miles (NM) offshore, the furthest distance that Gaza’s fishers have been permitted to access since 2000. Access to the northern areas along the coast remain more limited at up to 6 NM, well below the 20 NM agreed under the Oslo Accords (see map). 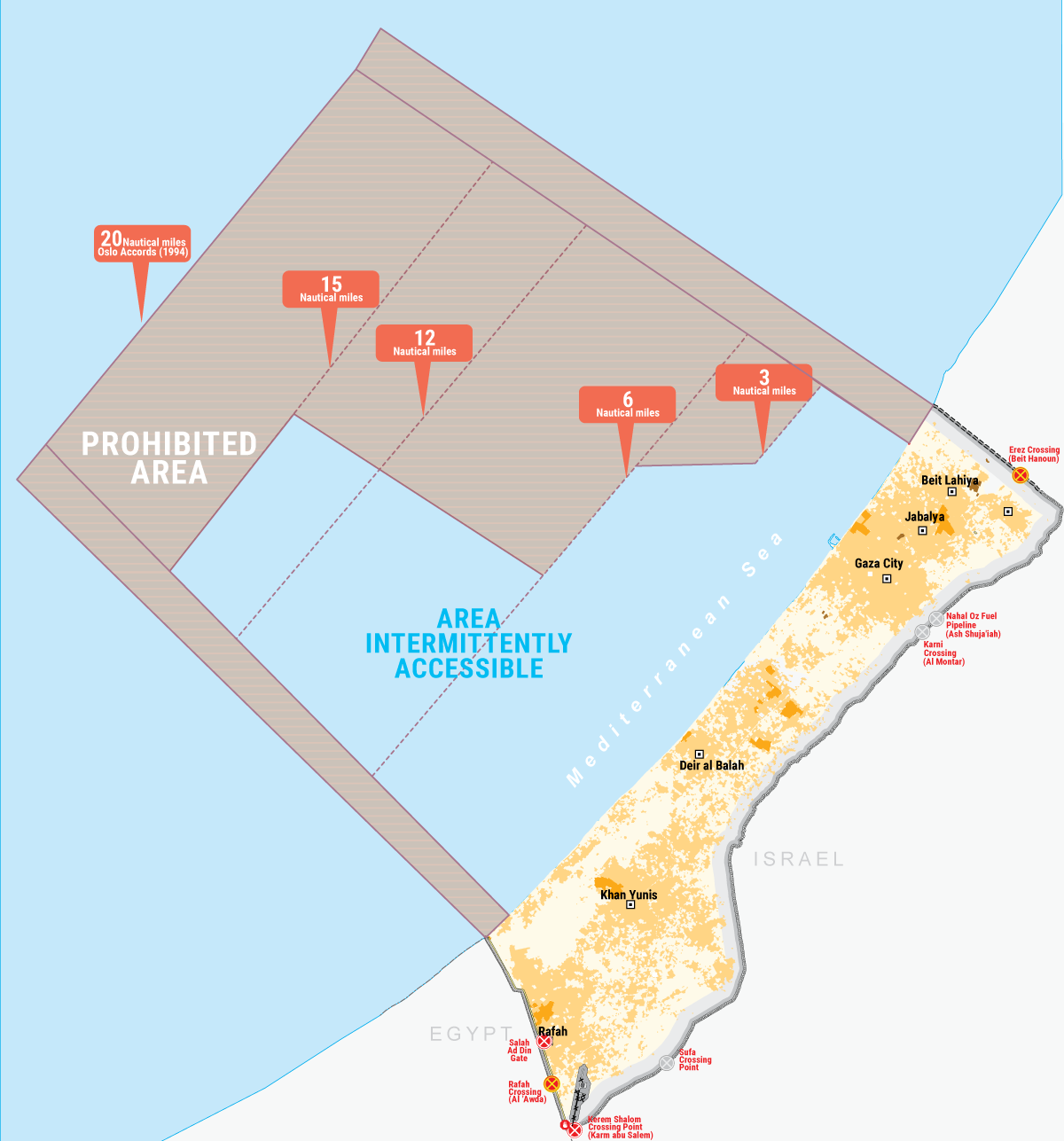 Despite the improved access, the situation remains unpredictable: between April and October 2019, the fishing limits have been changed (i.e. reduced or extended) 14 times, including on three occasions when Israel announced a full naval closure that denied Palestinian fishers access to the sea following the launching of incendiary balloons towards Israel.

“The expansion of the fishing zone has improved our situation,” explained Fadi. “However, only the big boats can reach the 15 mile limit. I had one such boat, which I bought for $150,000, but I was forced to sell because I didn’t earn enough income to maintain it. Each fishing trip cost us between NIS 600 -1,000 and often we returned without any catch.”

Despite the improved access, the situation remains unpredictable: between April and October 2019, the fishing limits have been changed (i.e. reduced or extended) 14 times. 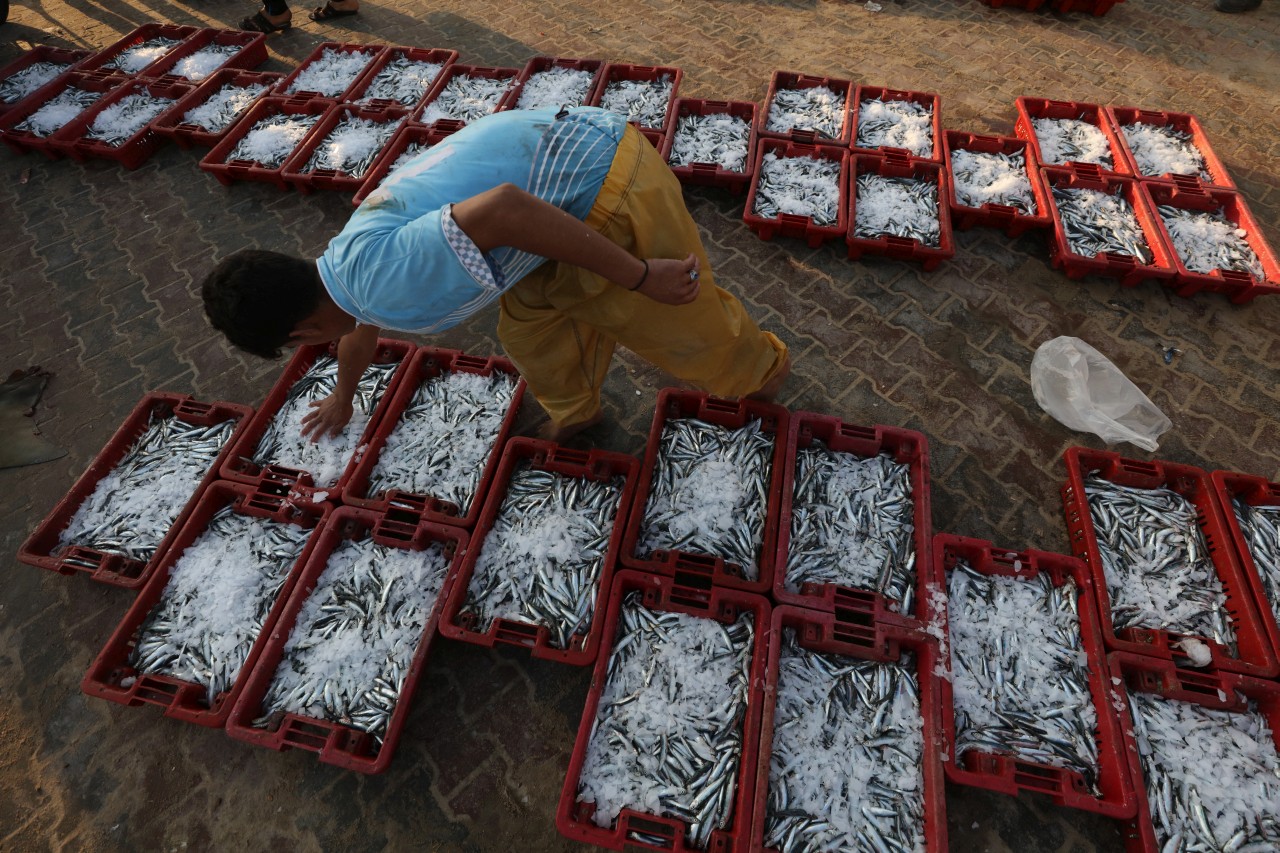 Up to 2000, the fisheries sector in Gaza provided a significant source of employment with over 10,000 registered fishers who were able to fish in safety. Currently there are 3,617 registered fishers in Gaza which, including their families, suggests that some 18,000 people rely on fishing for their livelihood.[2] Additionally, fish, as a major source of protein, micronutrients and essential fatty acids, provides nutritional diversity to Gazan diets. However, access restrictions to fishing areas, along with import and export limitations including access to outside markets imposed by the Israeli authorities as part of the blockade, have severely undermined the fisheries sector in Gaza.

There is a direct correlation between the scope of access to the sea and the quantity and value of the fishing catch; the further out to sea fishers can go, the deeper the water and the higher the value of the fish caught (see chart 1). As a result of the increased access in recent months, the cumulative catch between January and August 2019 reached 2,357 metric tons (MT), a 34 per cent increase compared with the same period in 2018.[3] 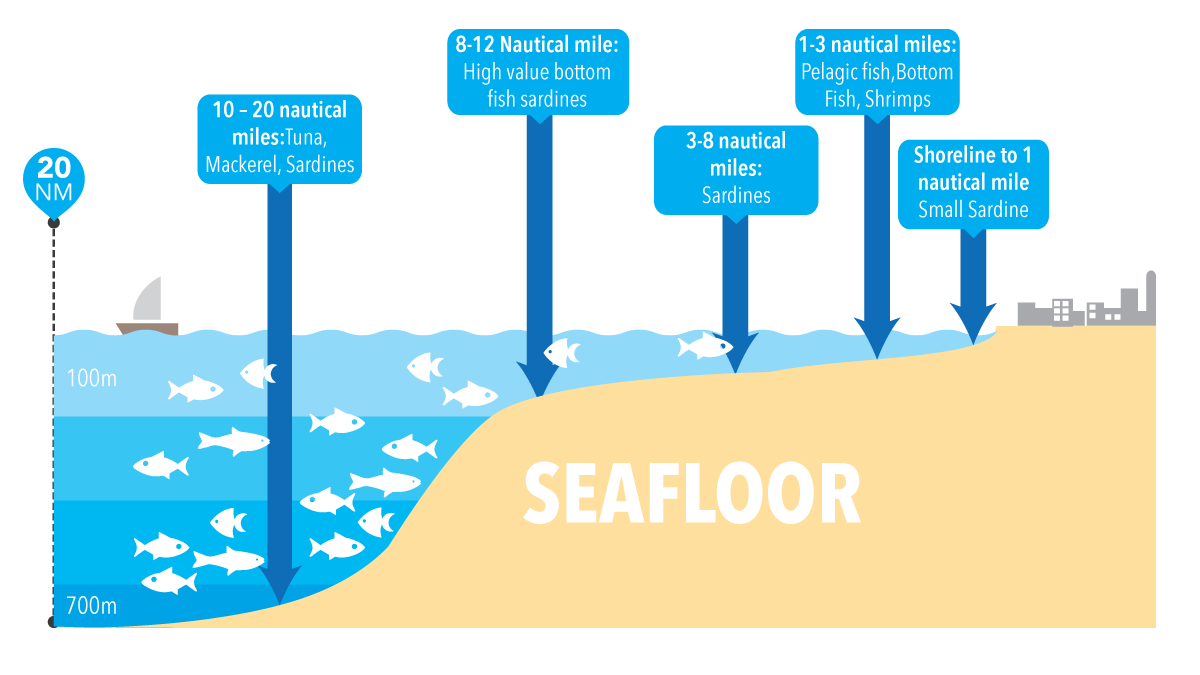 However, the revenues obtained so far this year (about $7 million) increased by less than 10 per cent compared with the equivalent period in 2018, and represent an 18 per cent decline in revenue per metric ton.[4] The decrease in revenue can be partially attributed to the temporary ban on the marketing of fish outside Gaza imposed by the Palestinian Ministry of Agriculture and the Palestinian Ministry of National Economy in June 2019, to prevent a rise in the price of fish in the local Gaza market. Gaza’s external trade in fish resumed on 6 July amid some restrictions remaining on the types of fish allowed to exit.

As a result of increased access, the cumulative catch between January and August 2019 reached 2,357 metric tons, a 34 per cent increase compared with the same period in 2018.

In addition to the increased fishing catch from the sea, 2019 recorded a significant increase in the production of farmed fish. As a result, the combined volume of farm and sea fish that exited Gaza in the first nine months of this year is already 85 per cent higher than the volume in all of 2018 (see chart 2). 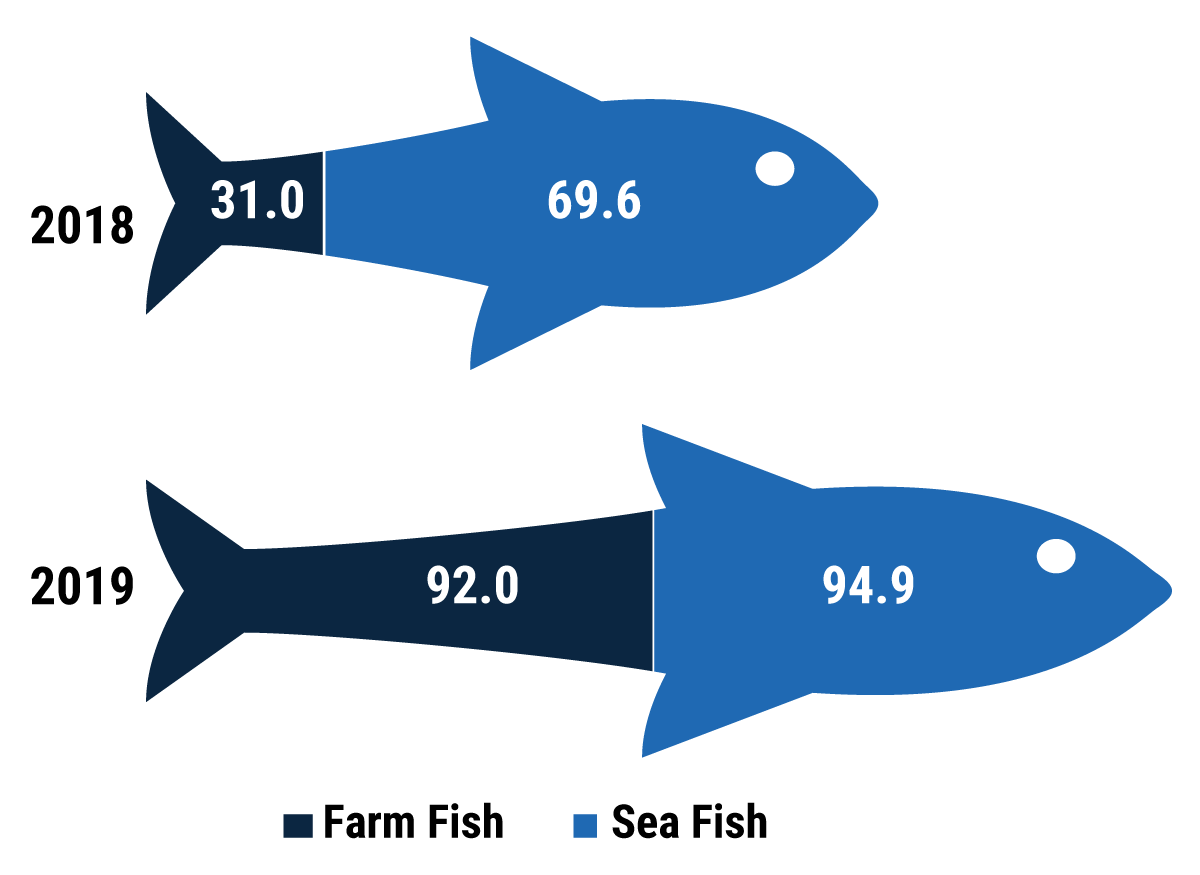 Fish farming in Gaza started in 1995 and has rapidly increased over the last decade. Since 2009, two producers of sea bream and sea bass operate larger land-based marine fish farming facilities using water from wells. However, the income from these activities has been significantly curtailed by high production costs, including reliance on expensive electricity generators.

The Israeli navy enforces fishing limits by, among other means, opening live fire at fishing boats, resulting in casualties and damage; forcing fishers to jump into the sea and swim towards Israeli vessels, where they are detained; and confiscating boats and fishing equipment. These practices discourage some fishers from fully exploiting the permissible fishing area even when expanded.

On at least 248 occasions between January and October 2019, Israeli forces have opened fire in areas off the coast of Gaza while enforcing access restrictions; as a monthly average, this is roughly the same as in 2018. While no fisher has been killed so far this year compared with four fatalities in 2018 (two by the Israeli navy and two by the Egyptian navy), 17 fishers, including two children, have been injured in shooting incidents versus 20 in all of last year. Another 33 fishers (including three children) have been detained since the start of 2019, a significant decline compared with 2018 (94 people).

On at least 248 occasions this year, Israeli forces opened fire off the coast of Gaza while enforcing access restrictions, roughly the same as in 2018.

In 2019, Israeli naval forces have also seized and/or damaged 19 fishing boats and fishing nets while enforcing the fishing limits. In a positive development in the first seven months of 2019, the Israeli authorities released 66 boats that had been seized in previous years; some of these boats were severely damaged or lacked engines when returned.

Most fishers in Gaza have old and outdated fishing equipment which impedes their ability to reach the permitted limits. Imports of engines and other equipment into Gaza is restricted by the Israeli authorities citing security concerns.

“We are suffering a lot from the Israeli naval forces,” said Fadi. “They chase us, use water cannons and open fire towards us and detain us. I have been detained six times. I can’t remember how many times me and my sons have been injured by rubber bullets! They’ve confiscated three engines and one small boat, which they still haven’t returned. As fishermen, the sea should be always open for us, but we are trapped in a restricted zone.” 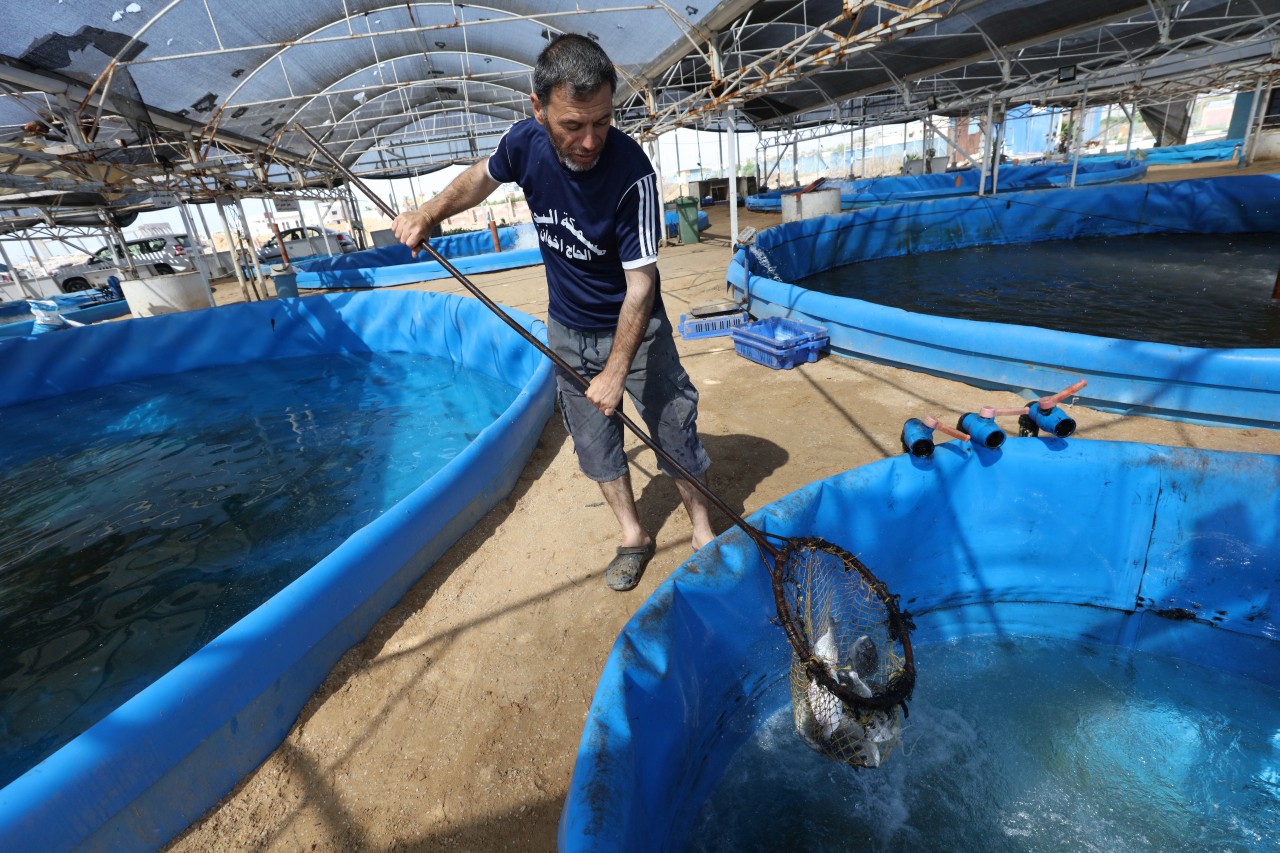 FAO, with support from the Italian Agency for Development Cooperation (AICS), is supporting the establishment of an offshore marine cage farm in Gaza, to be managed as a social business owned by the fishing community. The pilot offshore marine cage farm is expected to produce approximately 150 metric tons (MT) of sea bream per year, contributing an additional 4-5 per cent MT to the local fish market. The increased availability will make fish more affordable for consumers, increase consumption levels and dietary diversity, and may contribute to the growth of exports and income earned by the fishing community.

[2] Information provided by the Department of Fisheries in the Ministry of Agriculture in Gaza.