Since September 2000, Israel has tightened restrictions on Palestinian access to the sea and to land located near the fence with Israel – Access Restricted Areas – citing security concerns. These restrictions have been enforced through the firing of live ammunition, destruction of property, arrests, and the confiscation of equipment. While sea restrictions have varied, for the most part since 2006 fishermen have been allowed to access less than one third of the fishing areas allocated to them under the Oslo Accords: six out of 20 nautical miles (NM). Fish, particularly sardines, is a major source of protein, micronutrients and essential Omega 3 fatty acids for Palestinians in Gaza and contributes to nutritional diversity The fish available in the six NM area tend to be smaller in size, limiting the type of nets that can be used, reducing the value of the catch and undermining the sustainability of marine resources. Over 35,000 Palestinians depend on this industry for their livelihoods.

On 3 April 2016, the Israeli authorities expanded the fishing area along the southern Gaza coast to nine NM, while retaining the current six NM fishing limit along the northern coast. The volume of fish caught in April was 446.8 tonnes, a significant increase compared to 81.2 tonnes in April 2015. There was also a notable increase in the catch of four species of fish, such as white grouper, which are considered particularly profitable, with the catch increasing from one tonne in March 2016 to almost eight tonnes in April, following the expansion of the fishing zone. 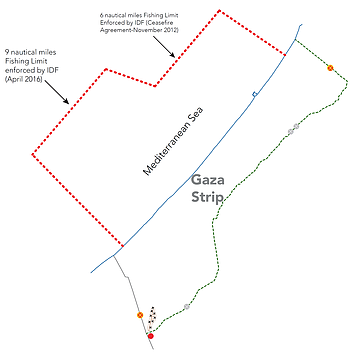