Empowering women in need of protection

Fatima is a 51-year-old Palestinian cancer survivor from the Gaza Strip.* Before the symptoms of her illness started, she had worked as a tailor and was the sole breadwinner of her family, which comprises eight members. Since 2012, her husband has suffered from kidney failure and is constantly on pain relief medication, which Fatima thinks has affected his psychological well-being and led to anger management issues. This makes him act violently with Fatima and their children, she says. Their eldest son, 25 years old, is epileptic, and their younger child suffers from a ruptured shoulder joint and cannot move his hands.

In 2016, Fatima was diagnosed with breast cancer. Her husband’s violence continued throughout her treatment. She suffered from depression, isolated herself and cried a lot. 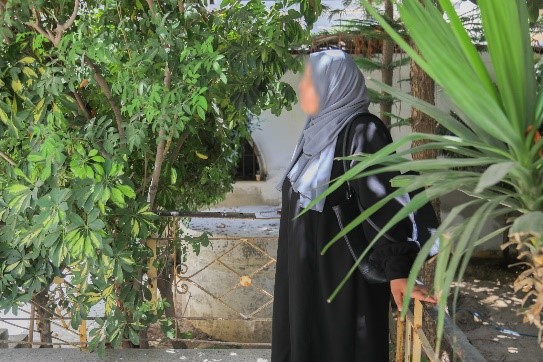 In 2019, she was among more than 7,000 women who received support through a project implemented by Aisha Association for Women and Child Protection and funded through the Humanitarian Fund for the occupied Palestinian territory (oPt HF). The project’s activities included raising awareness on reproductive health, gender-based violence and rights, and receiving legal counseling, mental health and psycho-social support services, dignity kits (containing hygiene and sanitary items, as well as other items tailored towards the needs of women and girls), case management and economic empowerment of women cancer survivors.

Fatima took part in support sessions, where she learned to express her feelings in new ways; she cried and laughed with her peers, who shared similar pains and stories. “I have never had such heart-felt conversations that made me feel as strong and self-confident as during these sessions,” she says. In many Palestinian communities, people are not aware of cancer and the disease still carries a stigma. “I am now much better equipped to face my community, their stigmatization and fear of my illness,” she says.

Fatima also received training, aimed at economic empowerment, where she honed her sewing skills. A social worker worked with Fatima’s husband and provided counseling sessions for both of them, so that he could support her to start a business. “It is time for me to work again and, once more, become a productive woman,” she says. “My family needs me as I’m the only breadwinner. I’ve decided to create my own project… and succeed in it.”

* Her name has been changed to protect her privacy.