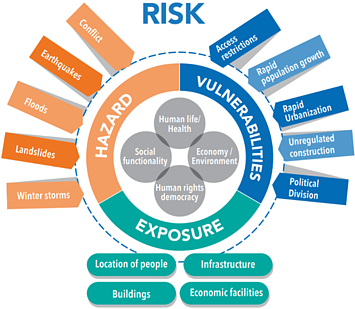 In addition to the humanitarian situation as detailed in the preceding parts of this document, the oPt is also vulnerable to other manmade and natural disasters. The most recent overall assessment of risks in the oPt identified the following main risks: natural hazards, including earthquakes, floods, droughts and landslides; and manmade hazards, including conflict escalation, severe stress on natural resources, environmental degradation, and rapid and unregulated urbanization.[1]

Given its potentially unique impact in terms of severity, the risks related to earthquakes should be particularly highlighted. There is a long historic catalogue of recorded earthquakes in the region, with an average of one major (+7 Richter) every thousand years, and a large one (6-7 Richter) every 80-120 years. The last major earthquake was the 1927 “Jericho Earthquake” (6.3 Mw at 15 km depth) with an epicentre under the northern part of the Dead Sea, and resulted in severe damage in Jericho, Jerusalem and Nablus. While exact locations of future earthquakes are impossible to predict, it can be noted that all major urban centres in the West Bank are located in close proximity to the Dead Sea Transform (DST), where geodynamic friction between the African and Arabian Plates generate seismic activity. 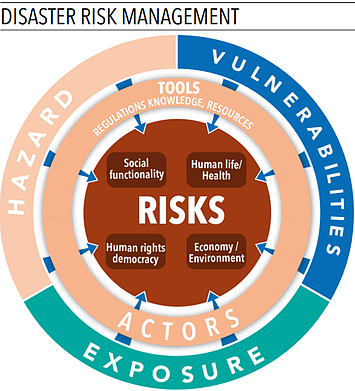 The level of vulnerability, which would amplify the consequences of any disaster or other severe societal disruption, is classified as high to very-high. The main factors behind the high vulnerability, which affects almost all aspects of disaster preparedness, mitigation and response, are the many access and movement restrictions related to the occupation, which impact both disaster-resilient development, and the ability of national and international rescue and relief assistance to be provided after a disaster strikes. There is a need to identify possible ways to mitigate the impact of the current regime of access restrictions in a disaster situation as an important component of the ongoing regional discussions on an assistance protocol for natural disasters, involving the Israeli, Palestinian and Jordanian authorities. Other important factors that increase vulnerability include rapid population growth; a rapid and largely unregulated urbanization; Palestinian political division; infrastructure vulnerabilities such as non-safe buildings; a transportation infrastructure where Palestinian use of certain roads is restricted; and social and economic vulnerability.

Based on the latest community assessment of perceptions of hazards and vulnerabilities, and disaster preparedness among the population at the local level, the main hazards identified by communities were related to flood risks and to a weak or deteriorating infrastructure. The most vulnerable communities include a large number in the Gaza Strip, but also some communities in the Hebron governorate; due to potentially composite exposure to winter storms, floods and weak infrastructure, and access restrictions.[2] 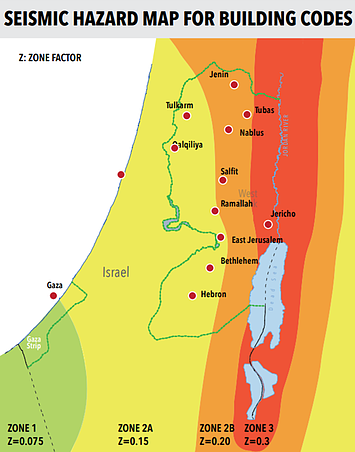 A process for a national disaster risk management system, including new DRM legislation and a new institutional framework for DRM has been initiated by Palestinian authorities. The three key initial components of this process, led by the Prime Minister’s Office (PMO), are the formation of: (1) a high-level executive National DRM Committee; (2) a technical/operational National DRM  Team under this; and (3) a national DRM Centre to provide over-all coordination support and monitoring of the national DRM process.

However, at this stage – especially operationally – disaster risk management still lacks overall, or systemic, coherence and comprehensiveness. Because of administrative fragmentation and access restrictions, the majority of Palestinian communities are not part of an established and tested comprehensive national response plan, and are to a large degree relying on local – formal and informal – structures and volunteer resources for emergency response. Many localities, including Palestine refugee camps and other vulnerable communities, often have little in the way of disaster risk management planning in place at all, which makes them particularly likely to face severe consequences from even moderate natural disasters. Due to operational and access restrictions, Palestinian communities, civil society and primary service providers have a proven history as primary responders. Volunteers and community-level response will thus, in all likelihood, remain crucial for an efficient response. 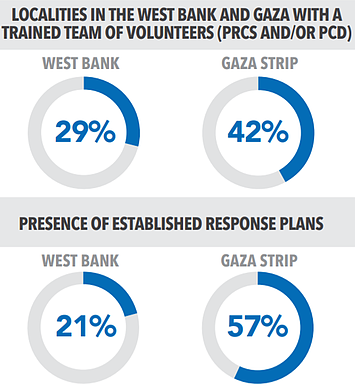 Given both the cross-border nature and shared impact of some of the main hazards, and the complicated operational environment, it is also important to have in place a close and well-functioning coordination and cooperation between relevant national DRM authorities in the region, to better prepare for, and respond to, the impact of natural and man-made disasters. There are already internationally coordinated efforts to develop networks and tools to enhance this, but also in this area there is a need to make this discourse more operational, ingrained in existing systems, and more reflective of existing authority at the field level.

In terms of direct emergency capacity among first responders, a particular operational concern is the need for Palestinian Civil Defence (PCD) in both the West Bank and Gaza to have the capacity and resources to perform effective search and rescue operations; including in both remote rural and large urban areas. In the densely populated Gaza Strip, even the basic capacity to perform fire and rescue operations in multi-storey buildings has deteriorated due to the lack of functional equipment for this, and needs to be considered an urgent concern for resource mobilisation for national and international actors, and also to be highlighted in the discussions with Israeli authorities on items to be allowed for import into the Gaza Strip. 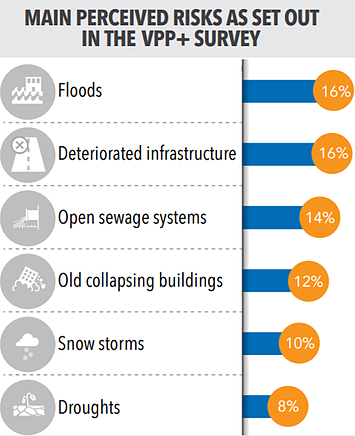 Because of the long history of international assistance in oPt, the international community already has in place many key components for an effective emergency preparedness system and has a proven track record of providing support to recurrent emergencies linked both to the on-going conflict and, to a lesser degree, to extreme weather events, through mobilization of in-country and international resources. However, some aspects of overall disaster preparedness, such as inter-agency coordination structures, national-local coordination and coordination with national and local authorities for different types of scenarios and a unified systematic approach, remain only partly completed.