Displacement | More than 100,000 displaced in Gaza hostilities and over 9,000 in West Bank demolitions

In 2019, over 700 Palestinians in Gaza were displaced following damage sustained to their homes during three limited escalations in hostilities between Israel and Palestinian armed groups.

The past decade witnessed two rounds of large-scale hostilities between Israel and Palestinian armed groups in Gaza (in November 2012 and in July-August 2014), which resulted in mass destruction of homes and displacement. While the 2012 escalation ended with the displacement of approximately 2,000 people, during the 2014 hostilities about 100,000 people were displaced as their homes were destroyed or severely damaged, of whom 7,400 were still displaced at the end of 2019.[1] 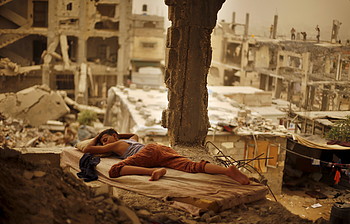 In the West Bank, during 2019 Israel demolished or seized 622 Palestinian structures, mostly in Area C and East Jerusalem, overwhelmingly on the grounds of a lack of an Israeli-issued building permit, which are almost impossible to obtain. Of the structures destroyed or seized in 2019, 127 had been provided as humanitarian assistance.

Overall, 914 Palestinians, or almost three people every day, were displaced during 2019, including 449 children: this is almost twice as many as in 2018. Many more were affected by the destruction or seizure of structures supporting their livelihoods or access to services. 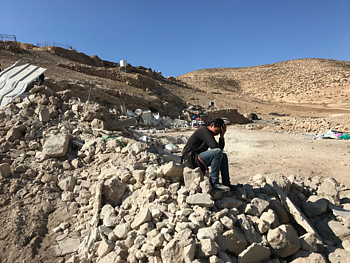 These incidents bring the number of Palestinian structures demolished or seized during the 2010-2019 decade in the West Bank to 6,120, and the number of people displaced as a result to 9,262, more than half of them children.[2] Many more people are still at risk of being displaced or otherwise affected: in Area C alone, there are over 13,000 pending demolition orders, including 40 issued against schools. In East Jerusalem, the largest number of structures targeted during the decade was recorded in 2019.[3] 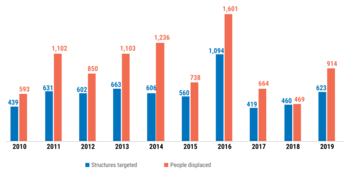 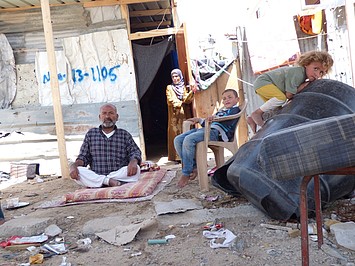 Abu Mohammad’s story: Abu Mohammad, his wife and nine children were among those displaced during the 2014 conflict, when his home in Beit Hanoun (northern Gaza) was destroyed by an Israeli airstrike. His difficulties as a displaced person were compounded by being disabled: Abu Mohammad’s electric wheelchair was destroyed during the hostilities and his children had to carry him everywhere (Read more). The family spent two years in a temporary makeshift shelter, and then a caravan, before reconstruction was complete and they were able to return their home.

Aziz’s story: Aziz is a 25 year-old Palestinian from Khirbet ar Ras al Ahmar, a small Bedouin community in Area C in the northern Jordan Valley. In February 2019, the Israeli authorities demolished his family’s residential tents and animal shelters, forcing the family to seek refuge in a nearby town and leave the livestock behind. Following the delivery of emergency assistance by a humanitarian organization, Aziz and his family were able to return and restore their livelihoods. However, the threat of new displacement remains (read more).

[1] At the height of the 2014 conflict, an estimated 485,000 people – 28 per cent of Gaza’s population – temporarily fled their homes to safer areas and shelters within Gaza.

[2] Some of the people included in this figure were displaced more than once.