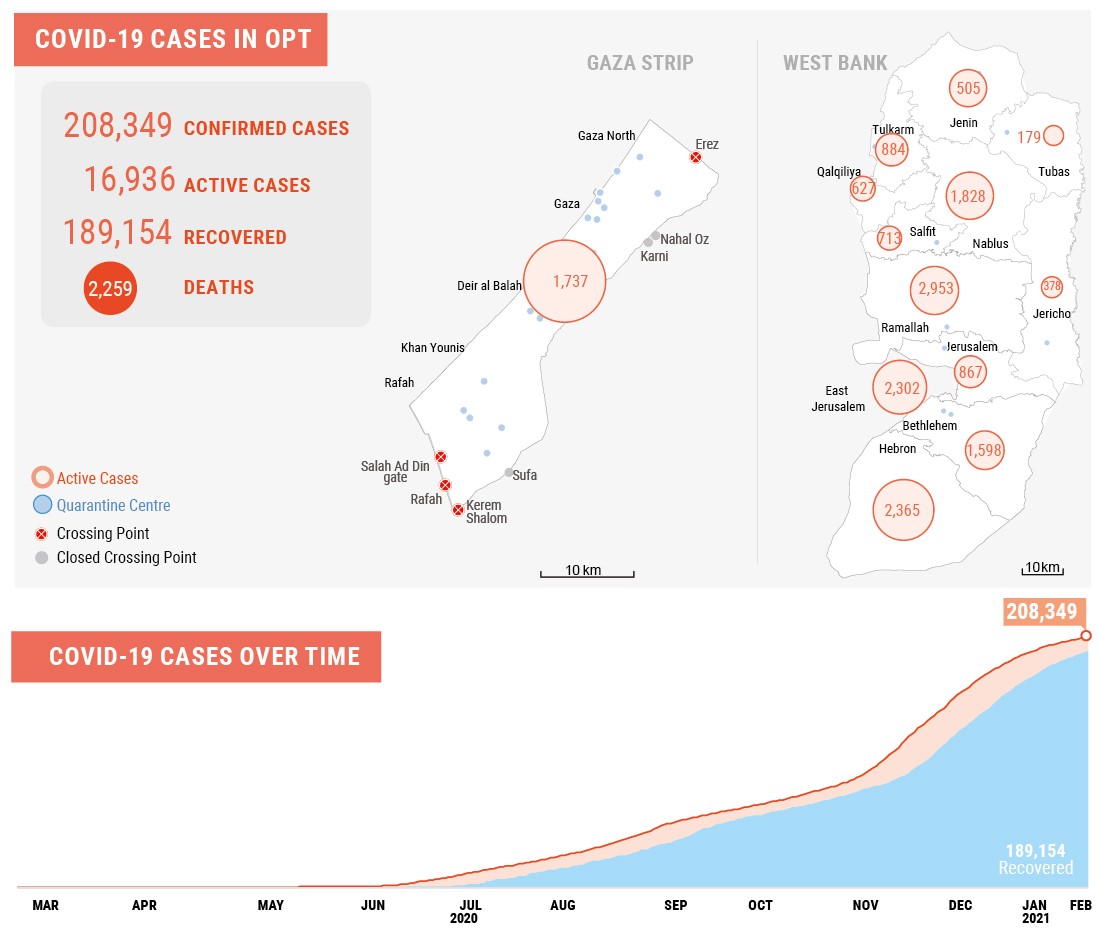 February witnessed an 88.5 per cent increase in active COVID-19 cases in the oPt, with 29,430 additional Palestinians testing positive, and 21,233 people recovering, according to the Palestinian Ministry of Health (MoH). The cumulative number of cases is 208,349, with 189,154 people recovered from the virus. The number of patients in intensive care units (ICU) increased from 57 at the end of January to 117, with those requiring mechanical ventilation rising from 19 to 26.

However, while the number of active cases declined by 61 per cent in Gaza (from 4,485 to 1,737), they rose by 236 per cent in the West Bank, including East Jerusalem, (from 4,501 to 15,119). By the end of the month, the Gaza Strip accounted for only 10 per cent of all active cases in the oPt, compared with 50 per cent at the end of January, with the Ramallah governorate registering 17 per cent of all active cases in the oPt, followed by the Hebron governorate (14 per cent), the East Jerusalem area (13.6 per cent), and the Nablus governorate (10.8 per cent). According to WHO, the surge in the West Bank is most likely due to the prevalence there of new, more contagious variants of COVID-19.

In early February, the Palestine MoH, in collaboration with partners, and with support from WHO, conducted a survey to estimate the prevalence of COVID-19 in the West Bank and Gaza. The preliminary findings suggest that an estimated 40 per cent of the population tested positive for immunoglobulin markers related to COVID-19, with up to ten per cent more women testing positive than men. The final report, including recommendations, is expected to be released by the end of March.

In response to the decrease in infections in Gaza, the local authorities have largely eased most of the public health restrictions. In a significant development, on 9 February, the Egyptian authorities re-opened the Rafah Crossing for travel in both directions.

In the West Bank (excluding East Jerusalem), new restrictions were imposed on 28 February, which includes a night and weekend lockdown and a return to distance learning for most pupils. By contrast, the Israeli authorities are planning the imminent reopening of restaurants, cafes, hotels and event venues, in accordance with Health Ministry guidelines, with these measures also applying to occupied East Jerusalem.

A UN report prepared for the Ad Hoc Liaison Committee (AHLC), which met on 23 February, characterizes 2020 “as a year of setbacks for the Palestinians, their institutions, and their economy owing to the COVID-19 pandemic and an unprecedented fiscal crisis.” The Palestinian economy contracted between 10 and 12 per cent in 2020, with indicators suggesting that poverty and food insecurity rates rose sharply, gender-based violence increased, and educational attainment declined. The report’s authors suggested “the unfortunate events of 2020 will negatively shape Palestinian development trajectories for many years to come.”

In Gaza, the first batch of vaccines, 2,000 doses of Sputnik V, arrived on 17 February; an additional 20,000 does of Sputnik V were delivered on 21 February, as a donation from the United Arab Emirates. The vaccination campaign in Gaza began on 22 February, targeting frontline health workers.

The first vaccines delivered through the Gavi COVAX AMC Facility, in partnership with WHO and UNICEF, are now expected to arrive in March, including 37,400 doses of Pfizer/BioNTech, subject to agreement with the manufacturers. A further allocation of 240,000 doses of the Oxford-AstraZenica vaccine are also expected, probably in June.

Through COVAX, the Palestinian Authority PA is eligible to receive donor funded COVID-19 vaccines for up to 20 percent of its population and has applied for additional doses to cover an additional 40 per cent of the population on a self-financing basis. According to the World Bank, about US$55 million will be needed to vaccinate 60 per cent of Palestinians, of which there is an existing gap of $30 million.

Israel is continuing its vaccination programme, which is also available to Palestinians in East Jerusalem, and currently ranks first globally for per capita vaccinations, with over three and a half million people already vaccinated with the first dose. On 23 February, Israel opened a vaccination centre at Qalandiya checkpoint for Palestinians with Israeli residency (from East Jerusalem) who live beyond the Barrier, and who face problems in accessing the remainder of Jerusalem city.

On 28 February, the Israeli government approved a plan to vaccinate over 120,000 Palestinians without Israeli residency, who are employed in Israel or in Israeli settlements, to be implemented at border crossings and in industrial zones across the West Bank. A number of Israeli, Palestinian and international health and human rights organizations, as well as Israeli health officials, have called on the Israeli authorities to ensure that vaccines are equally and fairly provided to Palestinians living under occupation in the West Bank and Gaza.

Due to the surge in infections in the West Bank, the Palestinian Prime Minister announced new restrictions which came into effect on 28 February, until 11 March. All schools (except for grade 12), institutions and universities are closed, and pupils have moved to online learning. All vehicular movement is prohibited and all businesses, except for pharmacies and bakeries, are to close from 19:00 to 06:00. Travel between governorates, including Jerusalem, and gathering such as weddings, parties and funeral houses are also prohibited. On weekends, a closure will be imposed on Fridays and Saturdays with all shops, businesses and restaurants closed, and all movement, including that of vehicles, heavily restricted. Government ministries, as well as the private and industrial sector, will operate at a reduced staff capacity of 50 per cent. The PA is increasing penalties against violators, and erecting checkpoints at junctions and at the entrances to cities.

In the northern West Bank, all beds are occupied in the PRCS Hospital, the Military Hospital, and the isolation wards of private and civil society hospitals in Nablus. The ICUs are also fully occupied in Nablus. Similar scenes are reported in facilities in Tulkarm and Tubas. In the southern West Bank, the dedicated COVID-19 wards in a number hospitals are fully occupied and struggling to meet the increased demand. According to the MoH, about 48 per cent of all ventilators are in use in the West Bank (excluding East Jerusalem), the highest rate since the beginning of the pandemic. The MoH has further indicated that 30 per cent of the hospitalized patients are young, some as young as two years of age, with no history of illness. There are reports that public adherence to physical distancing and the use of facemasks is minimal, with social events such as weddings and mourning houses taking place, as well as mass meetings by political activists in preparation for the upcoming elections.

In addition to the general closure, in February, temporary local lockdowns were imposed throughout Salfit governorates, and in localities in Jenin, Tulkarm, Qalqiliya, Nablus, and Bethlehem. Many schools were temporarily closed due to an increase in the number of cases among students and school staff, before the general closure of all schools, except for Grade 12, was imposed at the end of the month.

Palestinian workers with valid permits are allowed to enter Israel through the designated checkpoints. Israeli police are monitoring unofficial routes and openings, but workers are still entering Israel through breaches in the Barrier.

Citing the lack of building permits, during February, the Israeli authorities demolished or seized at least 146 Palestinian-owned structures in the West Bank, including East Jerusalem, displacing at least 305 people.

On 1, 3, 8 and 22 February, the Israeli authorities dismantled and confiscated 80 structures, including 65 provided as humanitarian assistance, in the Palestinian Bedouin community of Humsa - Al Bqai’a in Area C. As a result, ten households, comprising over 60 people, including 36 children, were displaced multiple times and are at heightened risk of forcible transfer.

In Gaza, 3,866 new COVID-19 cases were recorded in February, with the number of active cases declining by about 60 per cent. The cumulative caseload since the start of the pandemic has reached 55,178. Twenty-eight people died in February, bringing the overall death toll to 550. By the end of February, only 51 people were in isolation in the designated hospitals. Another 1,688 were in home isolation and 5,254 people were in home quarantine. On 18 February, the local authorities removed the last restrictions, allowing for the reopening of gyms, wedding halls and sport clubs. Schools are still not fully open, with pupils attending three days and the three others online.

For an interactive map of isolation and quarantine facilities in Gaza see the OCHA’S WEBSITE.

The Rafah crossing with Egypt opened between 1 and 4 February, and then reopened until further notice on 9 February, with a further 5,120 entries and 9.537 exits recorded during the month. The entry of goods continued from Israel through the Kerem Shalom Crossing, as did imports from Egypt via the Rafah Crossing. On a daily average, since the beginning of 2021, about 80 Palestinians enter Gaza through the Erez Crossing on working days.

Responses to COVID-19 related needs during 2021 have been mainstreamed in virtually all humanitarian activities planned for the year and included in the 2021 Humanitarian Response Plan for the oPt. The Plan requires US$417 million in order to deliver assistance to 1.8 million Palestinians in the Gaza Strip and West Bank, including East Jerusalem.

In early February it was agreed that the Inter-Agency COVID-19 Task Force, led by the Resident/Humanitarian Coordinator (RC/HC), would be convened on an ‘as needed’ basis and that response to COVID19 should be incorporated into the key strategic decision making fora of the Humanitarian Country Team and the Humanitarian Country Team Plus Meetings as well as the UN Country Team as a standing agenda item.  If there is a significant change in the context demanding a specific response an ad hoc Task Force Meeting will be convened.  In the meantime the sub national Inter-Cluster Coordination Groups in both Gaza and the West Bank, continue to convene regularly, to coordinate the implementation of various responses to the crisis.

In February, the RC/HC’s Access Coordination Unit (ACU) facilitated the movement of 187 UN and international NGO staff, between East Jerusalem and the remainder of the West Bank, in addition to 22 trucks with medical, education and other vital equipment, compared with 356 UN and international NGO staff in January. Since 17 February, following negotiation by the ACU, Israeli coordination has not been required for critical Palestinian staff with Israeli residency (from East Jerusalem) to enter Areas A and B.

The local authorities lifted movement restrictions within the Gaza Strip on 4 February, removing the need for the coordination of critical missions. While the restrictions were still in place in January, the ACU coordinated 125 critical missions with the local authorities. In February, the ACU facilitated 33 UN and diplomatic missions into and out of Gaza, compared with 23 missions in January.

International UN and INGO personnel were unable to enter the country in February, due to the airport closure since 26 January. In January, the ACU facilitated the entry into Israel of 57 international NGO staff members and their dependents, after negotiating with the relevant Israeli authorities to lift the prohibition on the entry and re-entry of INGO staff into the country, due to tightened public health restrictions in Israel.

The Health Cluster is tracking the procurement and delivery of critical medical supplies by cluster partners against the immediate needs identified in the COVID-19 Inter-Agency Response Plan, in line with the State of Palestine’s National Response Plan.      All partners are encouraged to subscribe and submit their requests for procurement of medical supplies for laboratory testing, case management and infection prevention and control through WHO’s global COVID-19 response coordination portal.

The national Risk Communication and Community Engagement (RCCE) campaign continued to target media outlets and governorates, amid movement restrictions to address the COVID-19 pandemic and to encourage the population to follow protective measures. Messaging evolved to include crucial information on COVID-19 vaccines to eliminate misinformation and to encourage people to get vaccinated. RCCE materials are available online.