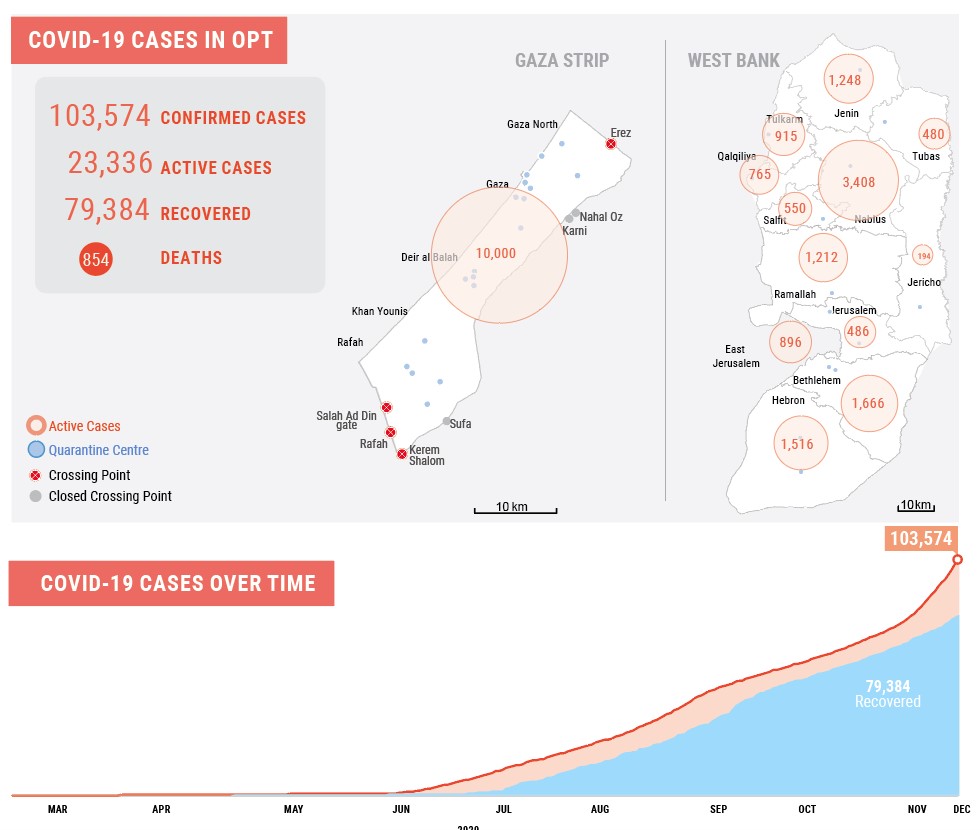 The reporting period witnessed an unprecedented surge in COVID-19 cases in the oPt, with over 23,000 additional Palestinians testing positive, and approximately 10,000 recovering. The number of cumulative cases has now surpassed 100,000. Active cases across the oPt more than doubled during the reporting period, from 9,748 to 23,336, according to the Palestinian Ministry of Health (MoH).  Sixty-seven patients are in intensive care units (ICU), 14 of whom require mechanical ventilation.

Some 178 people died, bringing to 854 the cumulative number of fatalities due to the virus, 736 in the West Bank, including East Jerusalem, and 118 in the Gaza Strip. The Case Fatality Rate (CFR), the proportion of deaths among identified confirmed cases, has remained at 0.8 per cent in the oPt since the beginning of the outbreak, the same figure as in Israel and Lebanon, but lower than Jordan (1.3 per cent), and Egypt (six per cent).

Although the health sector in the oPt is still coping with the rise in people requiring treatment for the disease, the World Health Organization (WHO) warns of an increasing risk of the system becoming overwhelmed. According to WHO, the respective authorities should put measures in place to promote greater adherence to public health.

The rise is particularly pronounced in Gaza, where active cases tripled during the reporting period. Gaza now accounts for 43 per cent of all active cases in the oPt, followed by the governorates of Nablus (15 per cent), Bethlehem (seven per cent), Hebron (6.5 per cent), Jenin (five per cent), and Ramallah (five per cent). An increase in the number of infected health workers is also raising concerns about adherence to infection prevention and control measures in hospitals. Since the start of the academic year, more than 220 schools across the oPt have closed for up to 14 days, following confirmed COVID-19 cases among pupils or staff, or in Gaza, due to their location in a ‘red zone’.

UNRWA’s financial crisis continues, despite the Agency securing a loan of US$20 million from the Central Emergency Relief Fund (CERF). Several smaller contributions have helped to reduce an immediate funding gap of $114 million, but are still insufficient to cover salaries, in full, for 28,000 staff for November and December. The Gaza Strip, with 13,000 employees, will be the most affected across the Agency’s five fields of operations in the Middle East.

On 29 November, following the resumption of coordination with the Palestinian Authority (PA), the Israeli security cabinet approved the transfer of NIS 2.5 billion in tax funds it had been withholding. The PA had refused to accept these transfers since May, in response to Israel's plans to formally annex parts of the West Bank. The renewal of coordination and tax clearance is expected to alleviate the PA’s severe financial deficit, and facilitate the import of COVID-related supplies to, and the movement of patients and staff within the oPt.

The number of active cases in the West Bank, including East Jerusalem, more than doubled in the reporting period, from 6,461 to 13,336.

In response to the surge, the PA announced the closure of commercial and service providers, except bakeries and pharmacies, between 27 and 29 November, and a nightly lockdown between 19:00 and 06:00, from 29 November to 13 December. Fines will be issued for people not adhering to safety measures, including the wearing of masks and distancing requirements. Following the announcement, an increase in public adherence to safety measures is being observed, with most shops and restaurants observing the nightly closure.

Nablus governorate again witnessed the largest increase, accounting for the largest proportion of active cases (3,408) after Gaza. On 1 December, the district recorded the highest daily number of new cases, 336, since the pandemic began. According to local sources, this increase is mainly due to people violating the isolation requirements. The villages of Tell, Madama, Jamma’in (Nablus), Anabta (Tulkarm), Marda (Salfit) and Jinsafut (Qalqiliya) are under temporary closure because of local surges.

The PA’s financial crisis continues to affect the six East Jerusalem hospitals, which have accrued debts and payment arrears of $68 million, due to the decline in referrals and reduced utilization of health services. On 30 November, the European Union provided a contribution of €9.27 million to enable these hospitals to maintain critical services while responding to the pandemic. As of 26 November, according to WHO, 31 COVID-19 patients were being treated in three of the East Jerusalem hospitals. Since March 2020, St. Joseph Hospital has treated 368 COVID-19 patients.

Citing the lack of building permits, during the reporting period, the Israeli authorities demolished, seized, or forced people to demolish at least 42 Palestinian-owned structures in the West Bank, including East Jerusalem, displacing 50 people, including 26 children. On 25 November, the Israeli authorities demolished two donor-funded water networks in the Massafer Yatta area of southern Hebron, disrupting the water supply to four communities (nearly 700 people, half of them children). The continuous targeting of water and sanitation related structures amidst the ongoing COVID-19 pandemic remains of serious concern, with the vulnerability of people affected further compounded by the onset of winter.

In East Jerusalem, the proportion of self-demolitions, following pressure from Jerusalem Municipality inspectors, is increasing. Since the beginning of the COVID-19 pandemic, 43 per cent of the 119 targeted structures in East Jerusalem were demolished by their owners to reduce the fines and expenses imposed by the Municipality, displacing 195 people including 96 children.

While the continued supply of laboratory testing kits and consumables remains a challenge, testing has been sustained at around 2,500 a day, prioritizing the elderly and those with underlying health conditions. The overall occupancy rate of dedicated COVID-19 beds in health facilities stands at 61 per cent (307 beds). The local authorities have expanded capacity to manage critical and severe cases at European Gaza Hospital to 150 beds, including 70 in intensive care units equipped with ventilators, and 80 high-dependency beds. The authorities have identified the provision of oxygen for the treatment of COVID-19 patients through the central supply system in the European Hospital as critical.  On 29 November, WHO delivered 15 ventilators to the health authorities in Gaza for critically-ill COVID-19 patients. The Health Cluster is working with partners to mobilize essential oxygen-generation equipment through international suppliers, but delivery will likely not take place before early 2021.

Around 20 per cent of the active cases, about 2,150 people, are being isolated in either of the two designated hospitals for COVID-19 (European and Turkish) or in 14 isolation facilities, if they show symptoms and/or need medical care, or if they are unable to isolate themselves at home without impacting family members. The remained are referred to home isolation.

The delivery of essential routine health services continues to be affected by the pandemic. The health authorities in Gaza announced the closure of all public outpatient clinics and the temporary suspension of elective surgeries for two weeks on November 24, while maintaining urgent and life-saving surgeries only.

All commercial outlets, except pharmacies, restaurants and bakeries must close by 17:00. Gatherings of more than 15 people indoors are prohibited, including for weddings and wakes at home. The authorities have also designated 56 out of the 94 geographic areas in Gaza as red, where no movement is allowed; 125 schools (108 government and 17 UNRWA) are in such areas and have been closed.

People entering Gaza through the Rafah or Erez crossings, including international staff/foreign delegations, are not required to undergo home quarantine, if they can present a negative PCR test result taken within 48 hours prior to entry. Those unable to present the test result on arrival can be tested at the border, but they are required to undergo home quarantine until the results are issued.

The Rafah Crossing closed on 26 November, having been exceptionally opened for three days in both directions, during which period 1,337 people entered Gaza and 3,171 exited. The entry of goods continued from Israel through the Kerem Shalom Crossing, as did imports from Egypt via the Rafah Crossing. The Erez passenger crossing with Israel was also open for the exit of a small number of exceptional cases, mostly medical patients. The number of Palestinians entering Gaza through Erez has been relatively consistent, at approximately 250 people per week.

The Inter-Agency COVID-19 Task Force, led by the interim Resident/Humanitarian Coordinator (RC/HC), as well as the Inter-Cluster Coordination Group (ICCG), continues to convene on a weekly basis, to set policies and coordinate the implementation of various responses to the crisis.

In the Gaza Strip, the data collection for the multi-sectorial assessment of households with people in home isolation/quarantine was completed on 20 November. The assessment was led by OCHA on behalf of the ICCG. It consisted of structured phone interviews with an adult member of each of 244 households with at least one infected member since the start of community transmission in August. The results will be circulated among ICCG members in order to improve the assistance provided to families in need.

During the reporting period, the RC/HC’s Access and Coordination Unit (ACU) facilitated the movement between East Jerusalem and the remainder of the West Bank for 181 UN, international NGO and diplomatic staff, in addition to seven trucks with medical, education and other vital equipment. The ACU also facilitated the entry into Israel of two UN and nine international NGO staff. Despite the tightening of restrictions in the Gaza Strip, following the upsurge in cases, humanitarian movement has so far not been affected. The ACU stands ready to resume the critical movement coordination system, should a need for that emerge.

The temporary coordination mechanism operated by WHO to support Palestinian patients from Gaza to apply for Israeli exit permits to access essential health services in hospitals in the West Bank and Israel, has been suspended since 23 November, following the resumption of coordination between the PA and Israel.

The Logistics Cluster, led by the World Food Programme (WFP), set up in the same context to support the import of needed commodities for the COVID-19 response, has continued processing pending requests. However, its operation will be reconsidered in the coming days, in light of the resumption of coordination between the PA and Israel. The cluster is currently processing 128 requests from UN agencies and international NGOs, of which 106 have been approved by both sides, 15 are pending approval by the Israeli authorities, and six have been cancelled.

The Health Cluster is tracking the procurement and delivery of critical medical supplies by cluster partners against the immediate needs identified in the COVID-19 Inter-Agency Response Plan, in line with the State of Palestine’s National Response Plan. The following table highlights the availability and gaps regarding the top ten medical items needed. [1]

All partners are encouraged to subscribe and submit their requests for procurement of medical supplies for laboratory testing, case management and infection prevention and control through WHO’s global COVID-19 response coordination portal.

The initial COVID-19 Inter-Agency Response Plan for the oPt, which requested $42.4 million to support an immediate response to the crisis and the efforts led by the Government of Palestine, covered interventions through the end of June.  In early August, the Plan was extended until the end of 2020 and the total requirement expanded to $72 million. Following confirmation of community transmission in the Gaza Strip on 25 August, there was increased concern about the ability of Gaza’s health system to manage the surge in cases. WHO estimated an additional $5.75 million was required to address these concerns. Consequently, the overall funding requirements reached nearly $78 million.

So far, $45.6 million, or 58 per cent of this amount has been raised. Including resources outside the Response Plan, $64.5 million have been mobilized in support of COVID-19 related response activities in the oPt. During the past two weeks, the Government of Germany has provided $804,000 towards the activities of the WASH Cluster.

Total funding for COVID-19 response by cluster (in Million US$) 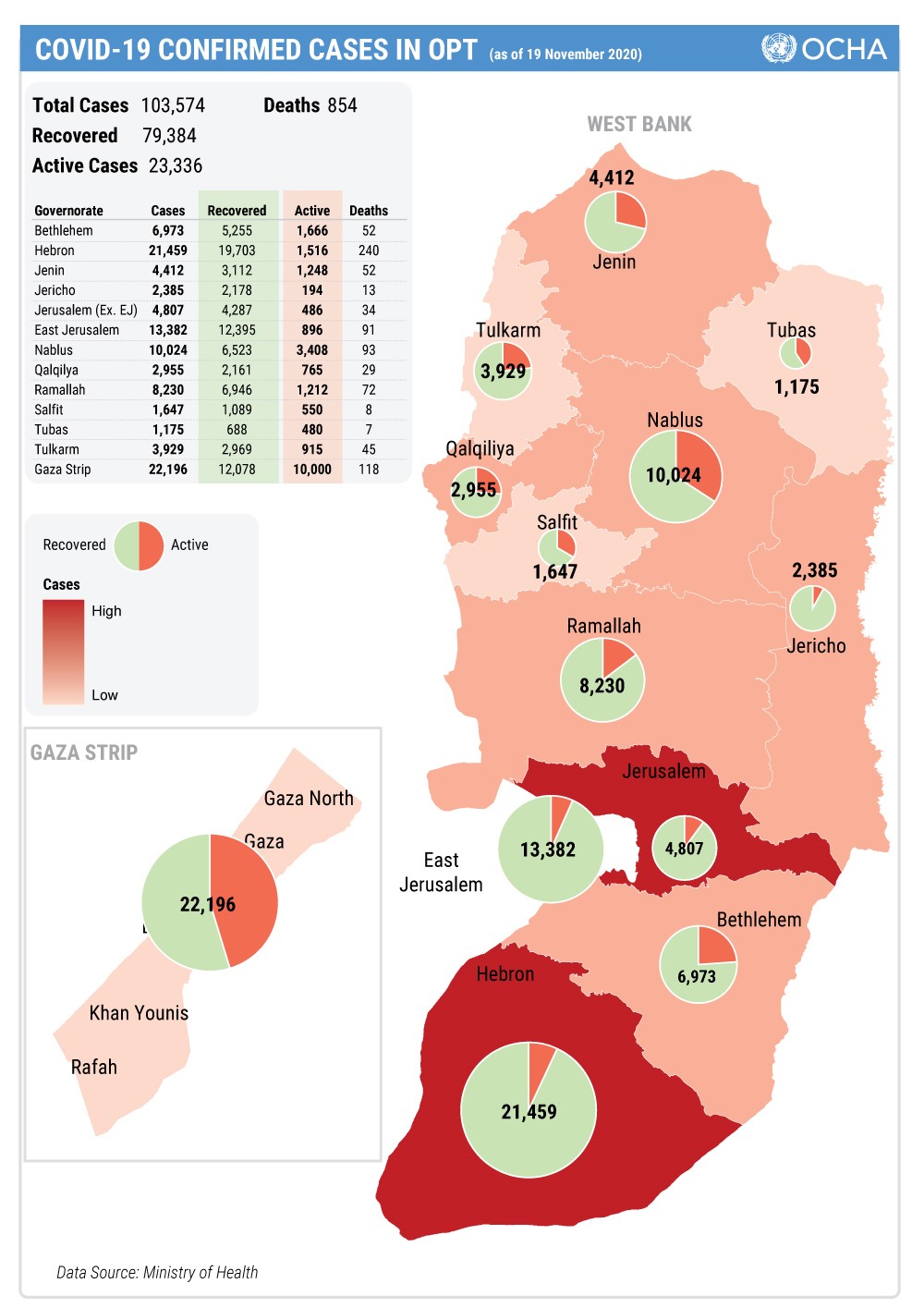