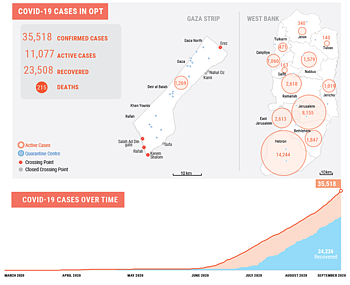 The number of Palestinians in the oPt who contracted COVID-19 and are currently active increased by over 33 per cent during the reporting period from 8,313 to 11,077. The cumulative number of cases since the start of the crisis reached 35,518 (as of 16:00, 8 September). Fifty-seven more people died during the reporting period, bringing to 215 the cumulative number of fatalities. Thirty-two patients are in intensive care units (ICU), with five requiring mechanical ventilation.

According to the Palestinian Ministry of Health (MoH), as of 3 September, 301,836 laboratory samples have been tested for COVID-19. Over 220,000 Palestinians have entered home, or facility-based quarantine, to monitor their symptoms and ensure early detection.

Over 1,100 of the 8,132 additional cases detected during the reporting period were in the Gaza Strip, where community transmission has surged since 24 August. In the West Bank, Hebron accounts for most of the active cases, with Qalqilya identified as a new hotspot. The rate of infection also remains high in East Jerusalem.

In Gaza, where approximately 600,000 pupils started the academic year on 8 August, all schools are now closed again until further notice. In the West Bank, there has been a staggered re-opening of the school year, beginning on 6 September.

The epicentre of the outbreak continues to be the Hebron Governorate, which accounts for forty per cent of the total cases, and 120 of the 215 fatalities. This is followed by East Jerusalem (23 per cent), the rest of the Jerusalem governorate (7.5 per cent), Ramallah (7 per cent) and Bethlehem (5 per cent).

Following a surge of cases in Qalqilya governorate, which now accounts for 3 per cent of all cases, a 72-hour closure was imposed between 17:00 on 6 September and 17:00 on 9 September. The closure applies to all facilities, except bakeries and pharmacies. Farmers may irrigate and harvest their lands between 05:00 and 10:00.

On 6 September, the new academic year began for 300,000 pupils between grades 1 and 4, utilizing an integrated education system for all schools, combining face-to-face education and distance learning, including a new TV channel, ‘Palestine Education’.  Since approximately 45,000 twelfth grade students returned to school on 9 August, an estimated 80 schools have temporarily closed, following confirmed COVID-19 cases among pupils or school staff.

People who were exposed to confirmed cases, and were either not tested, or tested negative, are being sent to home quarantine, as are Palestinians who enter the West Bank from Jordan or Israel. The vast majority of confirmed cases with light or mild symptoms are also being referred to home isolation. However, following the upsurge in cases in recent months and the concern of mass transmission, especially in overcrowded areas such as refugee camps, institutional isolation has been gradually re-introduced. Currently, there are three operational isolation centres on standby (in Jericho, Jenin and Nablus cities). Confirmed cases with severe symptoms are referred to a designated hospital/treatment centres, with 13 facilities currently operational.

East Jerusalem witnessed a twenty per cent increase in cases during the reporting period and has over 1,750 active cases. On 6 September, the Israeli government approved night-time curfews in some 40 cities in Israel with high infection rates, and in many Palestinian neighbourhoods in East Jerusalem. The curfews will be in effect every day between 19:00 and 05:00, entailing the closure of non-essential businesses and all educational institutions.

There are three designated hospitals in East Jerusalem to treat COVID-19 patients (Augusta Victoria, Al Makassed and St. Joseph), in addition to Israeli hospitals where Palestinians with Israeli residency status can be treated. A new isolation centre opened on 25 August at the Seven Arches Hotel and is so far hosting 40 confirmed cases from East Jerusalem.

Only Palestinians who coordinate with the Palestinian Ministry of Foreign Affairs are allowed to enter the West Bank from Jordan via the Allenby Crossing, and after being tested for COVID-19. Between 18 August and 7 September, there were 2,508 arrivals from Jordan.

Citing the lack of building permits, during the reporting period, the Israeli authorities demolished, forced people to demolish or seized 13 Palestinian-owned structures in Area C and East Jerusalem, displacing 44 and affecting the livelihoods or access to services of 12 others. Since the start of the pandemic, the Israeli authorities have demolished or seized, or forced people to demolish, at least 393 structures; this represents a 60 per cent increase compared with the monthly average between 2017 and 2019 (65 vs. 41). The structures demolished or seized over the past six months include 46 inhabited homes that were in place prior to the start of the crisis, leading to the displacement of 299 Palestinians.

Of continuing concern is settler violence, with physical attacks on Palestinian farmers and vandalism against Palestinian vehicles and olive trees, continuing during the reporting period.

In Gaza, 1,117 COVID-19 cases and the six fatalities were recorded in the reporting period. Until 24 August, all cases in Gaza were detected among Palestinians who had returned through the Rafah or Erez crossings, and were fulfilling the mandatory 21-day period in quarantine centres. Community transmission since then accounts for all but 30 of the 1,171 active case. Of the total number of cases (1,269), 89 have recovered and nine have died. To date, 34,212 samples have been taken in Gaza. Health partners in Gaza report that among the positive cases, 125 are health workers.

People with symptoms are being isolated in the European Hospital (currently over 120 people), while infected medical personnel with symptoms are being isolated in the Turkish Hospital (over 30 people). A school adjacent to the European Hospital is also accommodating mild/asymptomatic cases (over 100 people). In addition, quarantine facilities are used to isolate people with none or mild symptoms who are unable to isolate themselves at home. For all other cases, home isolation is imposed. Currently, there are 8,439 individuals in home isolation or home quarantine.

The lockdown imposed on 24 August has been eased in the Middle Area, Rafah and Khan Younis governorates, as well as in some neighbourhoods of Gaza City, given the relatively low number of cases in these areas. Except for elderly people and children, movement in these areas is allowed from 07:00 to 20:00, provided that safety and prevention measures, such as wearing masks and physical distancing, are respected. Vehicles can move within these areas and workers are allowed to work under the same conditions. Gatherings of more than ten people indoors or more than 20 people outdoors are prohibited. Movement across governorates is also prohibited, with the exception of urgent cases. A strict curfew remains in effect in the Northern governorate and the rest of Gaza City.

Following the Qatari-brokered end to the recent escalation in Gaza, the Israeli authorities re-opened the Kerem Shalom Crossing on 1 September and the entry of fuel for the Gaza power plant resumed, with electricity provision returning to 8-12 hours per day. The Israeli authorities reinstated the fishing zone up to 15 nautical miles off the southern shore, although little activity is ongoing due to the lockdown. The Erez pedestrian crossing with Israel is closed until further notice. The movement of goods from Egypt through the Salah ad Din gate continues, as previously. Rafah Crossing continued to be closed for the movement of travellers.

The Inter-Agency COVID-19 Task Force, led by the Resident/Humanitarian Coordinator (RC/HC), as well as the Inter-Cluster Coordination Group (ICCG), continues to convene on a weekly basis, to set policies and coordinate the implementation of various responses to the crisis.

As part of efforts to put in place necessary measures that will allow key stakeholders to continue providing life-saving assistance to those in need during the Covid-19 crisis, the RC/HC has approved a 90-day extension of six existing projects supported by the oPt Humanitarian Fund for West Bank isolation centres and Gaza quarantine centres. The estimated total financial resources required to provide support across different clusters (Shelter, & non-food items, WASH, Protection) for quarantine and isolation centres amounts to around $1.6 million. To ensure the provision of standardized services, ICCG members have conducted a joint assessment of PA/MoH isolation centres in the West Bank.

On 7 September, a senior UN team, led by the UNRWA Gaza Director, met with the Palestinian Minister of Health, Dr. Mai al-Kaila, during her visit in Gaza. The team briefed the minister about ongoing efforts to support the response to the COVID-19 crisis in Gaza. The UN team also highlighted some of the issues currently affecting the response, in particular the halt in coordination between the Palestinian and Israeli authorities on medical referrals, the lack of coordination between the Palestinian authorities in Ramallah and Gaza, and the need for more resources and support from Ramallah for the response in Gaza.

The day before, following extensive advocacy and negotiations with stakeholders, WHO initiated a temporary coordination mechanism to support Palestinian patients and companions from Gaza to apply for Israeli exit permits to access essential health services in hospitals in the West Bank and Israel. Referrals are made according to medical need, as decided by the Palestinian MoH. This temporary measure has been taken to mitigate the impact of the PA halt of coordination with the Israeli authorities, adopted since May in response to Israel’s threat to annex part of the West Bank.

In the same context, the UN Country Team has continued to operate a Logistics Cluster, led by the World Food Programme (WFP), to support the procurement of supplies and the receipt of donations needed for the COVID-19 response. Its main task is to mediate between the Customs Directorate in the PA Ministry of Finance and the Israeli authorities (COGAT and the Israeli Customs Office) to ensure the approval of the documentation required to allow the shipment of imported supplies into the oPt, through the various Israeli ports of entry. The Cluster is currently processing 79 requests from UN agencies and international NGOs, of which 61 have been approved by both sides. One request is still pending PA Customs approval and 12 are pending approval by the Israeli authorities.

The Health Cluster is tracking the procurement and delivery of critical medical supplies by Cluster partners against the immediate needs identified in the COVID-19 Inter-Agency Response Plan, and in line with the State of Palestine’s National Response Plan.

The table below highlights the availability and gaps regarding the top ten medical items needed.[1] All partners are encouraged to subscribe and submit their requests for procurement of medical supplies for laboratory testing, case management and infection prevention and control through WHO’s global COVID-19 response coordination portal.

As part of the Risk Communication and Community Engagement (RCCE) plan, nearly 40 partners are distributing communications materials aimed at ensuring that the public has access to a broad range of information on how to prevent the spread of COVID-19, and to deal with misinformation, as restrictions are eased, or alternatively re-imposed, by the respective authorities. To address the sudden escalation in cases in Gaza, the campaign has broadcast radio messages daily on six channels in Gaza; and released an Emergency Media Pack with social media materials, videos, brochures and radio resources to media and NGOs in Gaza, among other measures. RCCE materials are available online.

The initial COVID-19 Inter-Agency Response Plan for the oPt, which requested $42.4 million to support an immediate response to the crisis and the efforts led by the Government of Palestine, covered interventions through the end of June. In August, the Plan was extended until the end of 2020 and the financial requirement updated to $ 72 million.

So far, $32.5 million, or 45 per cent of the amount requested has been raised.  Including resources outside the Response Plan, $51.5 million has been mobilized in support of COVID-19 related response activities in the oPt.

Following the detection of COVID-19 outside the quarantine centres in Gaza, the Health Cluster developed a Priority Needs Paper, which requests an additional $5.75 million to cover supplies and interventions over the next three months in Gaza. Almost half of this amount will be allocated to scale up testing capacity, while the rest is aimed for case management equipment and infection prevention and control (IPC) items.

On 2 September, UNRWA launched a $ 94.6 million COVID-19 Appeal to cover the emergency needs of 5.6 million registered Palestine refugees until the end of December in its five fields of operation (Gaza, West Bank, Lebanon, Syria and Jordan), with a special focus on health, cash assistance and education.

Total funding for COVID-19 response by cluster (in Million US$) 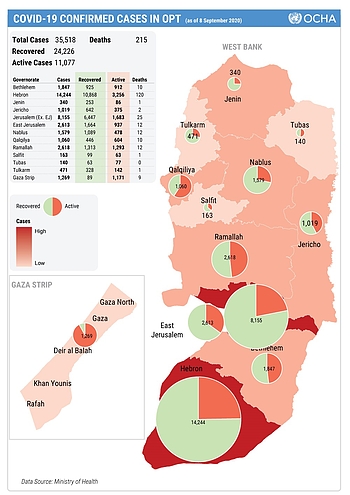