During March, 22 Palestinians, including five children, were killed by Israeli forces in various incidents across the oPt and Israel, including 19 suspected perpetrators of attacks; this is slightly higher than the number of fatalities during the first two months of the year, but well below those recorded in the last quarter of 2015. According to the Israel Security Agency, the overall number of Palestinian attacks (the majority of them involving Molotov cocktails and resulting in no casualties) declined during March by over 25 per cent compared with the previous two months.[i] March was the first month since the escalation of violence in October 2015 in which no Israeli fatalities were recorded, but a foreign national was killed in a stabbing attack in Jaffa (Israel) on 8 March and 11 Israelis were injured.

In one of the attacks, on 24 March, two Palestinians stabbed and wounded an Israeli soldier in Hebron city: one was shot dead and the other wounded by Israeli forces. Video footage of the scene, a few minutes after the incident, recorded an Israeli soldier shooting at the head of the wounded Palestinian, who was lying on the ground and not posing any apparent threat. The spokesperson for the UN High Commissioner for Human Rights, expressed concern about the “apparent extra-judicial execution” and the fact that this may not be a lone incident. The soldier was detained by the Israeli authorities and subsequently charged with manslaughter.[ii]

During March, Israeli forces injured 348 Palestinians, including 94 children, mostly during protests and clashes. These figures mark the continuation of a downward trend. About 10 per cent of these injuries were caused by live ammunition and the rest by tear gas inhalation requiring medical treatment, rubber bullets or physical assault.

One of the gravest incidents took place on 12 March when fragments from a missile fired by an Israeli aircraft at a military training facility in northern Gaza hit a nearby home, killing two Palestinian siblings and injuring another (see Case Study). The Israeli authorities said the airstrike was carried out in response to the shooting of rockets into Israel by a Palestinian faction the previous day, which resulted in no casualties or damage. An Israeli airstrike carried out in similar circumstances on 11 October 2015 killed a 26-year-old pregnant woman and her three-year-old daughter.

While the August 2014 ceasefire between Israel and Hamas has largely held, since April 2015 there has not been one month without the shooting of at least one rocket or mortar from Gaza into Israel. According to the Israeli Security Agency, the largest number of rockets/mortars launched were recorded in October 2015 and January 2016, with seven each month, followed by March 2016 with five.[iii] According to the Israeli authorities, Israeli air strikes and other armed actions on Gaza are in response to these incidents although they usually target military training facilities rather than the source of fire.

Although Palestinian rocket and mortar attacks during this period did not result in casualties, they put the lives of Israeli and Palestinian civilians living at, or near the launching and landing areas at risk. Palestinian civilians are also exposed to the Israeli airstrikes that follow these attacks; risks are exacerbated by the location of military facilities within or next to civilian areas, the high population density in Gaza and the unstable nature of many homes. Moreover, the experiences of the last decade indicate that both Palestinian and Israeli attacks have the potential to trigger a greater escalation depending on the gravity of the results.

Case study: “They were killed while they were sleeping.” 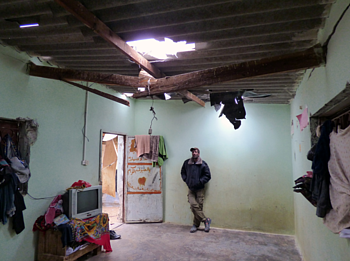 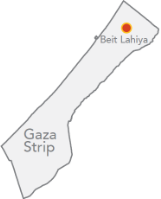 My husband and I, and our six children, were asleep when Israeli forces bombarded a training site belonging to an armed group located about 50 metres from our house. We lived in two rooms made of asbestos and other materials to make a kitchen and bathroom. When they bombarded the site of the armed group, the debris flew everywhere and some fell on our house. I lost both Yaseen (10) and Isra' (7), and Ayoob (12) was slightly injured.

Ayoob and Yaseen were very close friends. They used to study, eat, play, do everything together. I'm really worried about him because he completely refuses to talk about what happened. I’ve been woken up many times by him shouting and calling Yaseen's name. He also wakes up at nights to sleep in my lap. Whenever Ayoob sees anything on the TV related to war or shooting, he goes crazy and asks us to turn it off. I don't blame him, I can hardly sleep myself, and I'm trying not to cry in front of them.

I can't sleep well at night; I can't stand any more incursions or assaults. This is the third time I have lost my house and had to start from scratch. We were first displaced in 2002 when the Israeli army forced us to leave our area and demolished all the houses there. Then our house was destroyed in the 2014 war, and now it has happened to us again. But I have to support my children as they are really sad for their siblings.