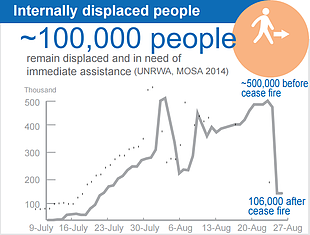 The number of families displaced during Gaza’s most recent war was unprecedented. UNRWA estimates that approximately 90,000 refugees had their homes damaged or destroyed. While some families have been able to find shelter with relatives or friends, there remain close to 28,000 people residing in 18 UNRWA schools under the Agency’s new approach of Collective Centres (CCs).[1] Over half of these residents are children – approximately 7,000 girls, and 7,500 boys –and more than 6,500 are women.

Prior to the conflict, based on historical patterns, UNRWA anticipated some 35,000 to 50,000 internally displaced persons (IDPs) in its installations for a number of days during any military escalation. In reality, at the height of hostilities, 91 UNRWA schools were being utilized as shelters and hosted almost 300,000 people. The majority left their houses without personal or household belongings and lacked income to provide their basic needs. Although the 26 August ceasefire has held, it was not until 9 October that IDP numbers in UNRWA schools dropped below 50,000. The numbers are dropping gradually as families find alternative shelter with families or friends and begin to repair or reconstruct their damaged homes.

To better meet the needs of IDPs at CCs, and improve their quality of life, dignity and preparedness for the future, UNRWA established a Collective Centre Management Unit (CCMU). It operates from Gaza City and comprises a head of unit, five operations officers and three support teams. This is in addition to the pre-existing operational components of UNRWA shelters, including a dedicated manager and a small caretaking team at each CC, alongside a medical team consisting of a doctor, nurse and medical focal points.

Participation by CC residents in decision making has enabled the implementation of important initiatives such as the IDP-led hygiene and water committees. Recreational activities for children and the provision of psychosocial support are also crucial aspects. In partnership with WFP, daily food rations are provided to residents and water supplies are trucked by UNRWA, municipalities and contractors to the CCs. With winter approaching, the current challenges faced by the CCMU are to ensure that all IDPs have adequate warm clothing, bedding, food and water.

Other initiatives implemented by the CCMU include the development of protection guidelines on issues such as the acceptance and registration of new IDPs, while considering vulnerabilities, access to facilities and services, and the prevention of violence.

UNRWA has been working in coordination with the National Consensus Government and UNDP to complete shelter assessments of all damaged and destroyed homes in the Gaza Strip. The Agency has commenced disbursement of transitional shelter cash assistance (TSCA) to affected families, including those who reside in the CCs. UNRWA estimates that the cost of TSCA per large family for 24 months is approximately US$6,000. 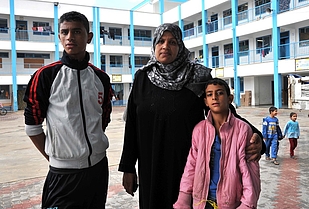 Aon and Afaf Abu Ajwa, together with their seven sons and two daughters (aged 11 to 22), were forced to evacuate their home in Ash Shuja’iyeh neighbourhood in eastern Gaza City, which was severely damaged in mid-July. They took refuge at an UNRWA shelter in Daraj school.

The terrifying ordeal was made worse when the family realized that their son, Imad, was missing. “I could not eat or sleep; I realized that we had left our son behind in the demolished house,” said 42 year old Afaf. “My husband and I took advantage of the first humanitarian truce and approached the home to look for him. We found him alive under the rubble, scared but unharmed.”

When the ceasefire was announced on 26 August, the family had no home to return to. Aon’s job as a bus driver for kindergarten children was also affected as the bus was damaged beyond repair.

The family moved to an UNRWA Collective Centre at Zaitoun Elementary School “B” at the beginning of September. “Life here is difficult despite the support and aid we receive… we really hope to move out and rebuild our home. It is difficult to locate an apartment for rent for 11 people,” said Afaf.

The family have since had their damaged home assessed and are now awaiting the results. They expect to receive a shelter assistance package soon.

[1] CCs are defined as “pre-existing buildings and structures used for the collective and communal settlement of a displaced population in the event of conflict or natural disaster”. See Shelter Cluster’s UNHCR and IOM Collective Centre guidance.