“Current Israeli practices related to the presence and expansion of settlements [...] continue to have a profound impact on land and housing rights, the right to water and sanitation and freedom of movement, and result in restrictions on the right to education”

Report by the UN Secretary-General, January 2016

Israeli settlements, which have been established and expanded in the occupied West Bank, including East Jerusalem, in contravention of international law, underlie many of the concerns highlighted in this report and generate the need for assistance and protection measures by humanitarian actors.

According to official Israeli data, the number of new ‘building starts’ in Area C settlements (i.e. excluding settlements in East Jerusalem) increased by 26 per cent in 2015 compared to 2014.[1] However, while the marketing of land for settlement construction by the Israeli government (i.e. tenders) also continued, the volume declined sharply compared to 2014, according to Peace Now.[2] 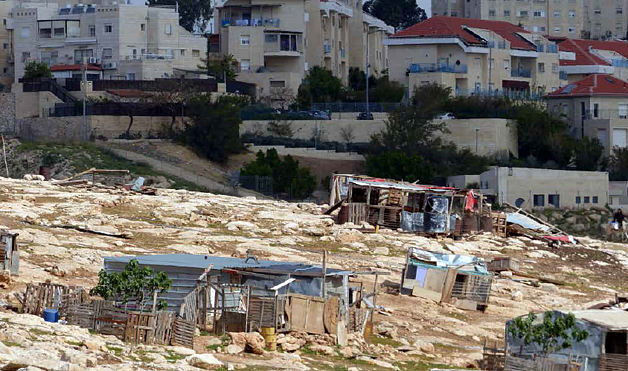 As a rule, all public land (also referred to as ‘state land’) in Area C is automatically placed within the boundaries of the settlement local and regional councils, rather than allocated for the benefit of the local population, as required under international law.[3] In 2015, the Israeli authorities continued to endorse “state land” declarations made in previous years, with the stated objective of advancing settlement expansion projects, or regularizing prior construction carried out without the permits required under Israeli law.[4] At the same time, during 2015 the Israeli authorities also demolished a few unauthorized settlement structures.[5]

This comes in addition to other Israeli-government-supported and promoted methods aiming at strengthening the presence of settlements in the oPt, including the declaration of archaeological sites, national parks, and infrastructure development.[6]

The official allocation of public land to settlements, along with the takeover of private land by settler groups, have contributed to the shrinking of space available for Palestinians to sustain their livelihoods in an increasingly fragmented West Bank, and have impacted their enjoyment of a range of human rights.[7]

The longstanding phenomenon of settler violence, compounded by insufficient law enforcement by the Israeli authorities, has also undermined the physical security and livelihoods of Palestinian communities. Documented cases of settler attacks, trespassing and forceful takeover of land, suggest that violence is often being carried out as part of a calculated effort by settlers to push Palestinian farmers from what has subsequently become de facto Israeli-controlled areas. This phenomenon has continued despite the efforts by the Israeli authorities to improve law enforcement against violent settlers.

Combined with the restrictive and discriminatory zoning and planning policy applied in Area C and in East Jerusalem, these settlement-related phenomena have undermined the living conditions of Palestinians and rendered them increasingly vulnerable, including to the risk of individual or mass forcible transfer.

[4] These endorsements are done by Israeli Civil Administration’s Task Force for the Survey of State Land Boundaries (the Blue Line team). The Blue Line team is tasked with inspecting and defining the boundaries of land designated as State property, or so-called “State land” by Israeli authorities since 1970

[5] On 29 July 2015, Israeli security forces demolished two apartment buildings in the settlement of Beit El (Ramallah), on privately owned land belonging to a resident of the adjacent village of Dura al-Qara. The demolitions were carried out pursuant to High Court judgments after lengthy legal proceedings and repeated attempts by the Israeli authorities and settlers to have the buildings retroactively approved.

[6] Israeli settlements in the Occupied Palestinian Territory, including East Jerusalem, and in the Occupied Syrian Golan, Report by the Secretary-General, A/HRC/31/43, para. 12.