16 years after the International Court of Justice Advisory Opinion, some 11,000 Palestinians are still isolated by the Barrier

as part of
The Humanitarian Bulletin | August - September 2020

This article was written with the support of UNRWA

Um Fuad, a 45-year-old registered Palestine refugee, lives with her husband and four children in Wadi al Khazrak in the northern Jenin governorate. Her small Bedouin hamlet is one of seven Palestinian communities that make up the Barta’a enclave, located between the Barrier and the 1949 Armistice Line (‘Green Line’), and now physically separated from the remainder of the West Bank. The reason for the deviation of the Barrier from the Green Line is the inclusion of four residential Israeli settlements (Hinanit, Tal Menashe, Shaqed and Rehan) with a total population of approximately 2,500, as well as an industrial zone. Since the area was declared ‘closed’ in 2003, Um Fuad, like other residents of the ‘Seam Zone’ over 16 years of age, requires a permit just to continue living in her own home. The permit also allows her to cross an Israeli checkpoint to access services in the remainder of the West Bank.[1]

Due to the divergence of the route of the Barrier from the Green Line, an estimated 11,000 Palestinians who hold West Bank ID cards live in in the ‘Seam Zone’.[2] Most of these communities lack health centres, schools and shops, obliging residents to pass through checkpoints to reach workplaces and essential education and medical services, and to maintain family and social relations in the remainder of the West Bank. In turn, the entry of dairy products, meat and eggs is restricted, and the Israeli authorities do not allow service providers to enter these areas unless they have obtained Israeli-issued permits or a verbal approval from the Israeli authorities (referred to as ‘prior coordination’). Family members and friends face similar restrictions on entering, with the result that birthday parties, religious holidays and weddings have to be held on the ‘West Bank’ side of the Barrier.

The Barta’a enclave is the largest and most populous of the ‘Seam Zone’ localities, and contains a Palestinian Authority (PA) clinic and several schools, located in the principal population centre, Barta’a ash Sharqiya. However, the clinic opens only three times a week, the services offered are basic, and Um Fuad must pay for treatment. As a registered Palestine refugee, she was able to avail of the services of an UNRWA mobile health team, but this service was discontinued in 2018, due to budgetary constraints. Patients with chronic or life-threatening diseases must travel to medical facilities located outside the enclave.[3] According to Um Fuad, “my husband, who suffers from kidney problems and pulmonary fibrosis, has to go regularly to the Jenin Hospital.” Prior to construction of the Barrier, Jenin was only a fifteen-minute drive away, but the time required now is unpredictable, due to the uncertainty involved in crossing the checkpoint.

The Israeli authorities channel Palestinian movement between the Barta’a enclave and the remainder of the West Bank through two checkpoints, Tura and Reikhan-Barta’a. The latter is the principal crossing and is open between 0500 and 2200 hours, and operated by an Israeli private security company. At night when both checkpoints are closed, or in cases of emergency, the access of residents has to be negotiated between the Barta’a village council and the Israel authorities. Residents complain of frequent delays and occasional harassment: Um Fuad recalls being detained by Israeli security forces at the checkpoint for several hours during Ramadan “for no reason at all, despite having the required permits and identification.” She also reports that some pregnant women are afraid of passing through metal detectors because they believe it is bad for them or their unborn babies.

The emergency measures imposed by both the Israeli and Palestinian authorities since March 2020 to contain the spread of COVID-19, have compounded longstanding access restrictions on ‘Seam Zone’ communities. The Tura checkpoint was closed completely between 22 March and 21 April.  Access through the Reikhan-Barta’a checkpoint was permitted only for emergency cases where ‘prior coordination’ with the Israeli authorities was arranged, and for vehicles transporting food supplies and other essential needs into the enclave. UNRWA, in coordination with the village council, managed to distribute food parcels, cash coupons and medicines for non-communicable diseases to the most vulnerable refugee families residing in the enclave, and also provided food assistance to the Bedouin refugee communities. Despite the difficulties Um Fuad faces, she continues to be the main provider for her family. “I am a working mother of four children and the wife of a sick man. I make cheese and sell it to the neighbouring villages and have managed to send three of my children to university.”

In the Jerusalem area, measures adopted to contain the pandemic have made the living conditions more challenging for approximately 400 Palestinians, who hold West Bank ID cards and are isolated in at least eight different locations between the Barrier and the Israeli-declared municipal boundary of Jerusalem. Although located on the ‘Jerusalem’ side of the Barrier, they are not allowed to live in, or enter, East Jerusalem and are physically separated from the remainder of the West Bank. People living in these areas have limited or no access to basic services and they live in constant fear of displacement.

Some are married to spouses who hold Jerusalem IDs, dating back to the time when the Jerusalem municipal boundary was a notional line on the map, and when movement and access was more fluid. Some avail of mechanisms set up by the Israeli Civil Administration, whereby a list of names of the members of the community is maintained at the nearest checkpoint, allowing passage through the Barrier to the remainder of the West Bank. Others, following legal proceedings, have succeeded in obtaining temporary permits which allow them to continue to reside in their homes and to cross checkpoints. Others have received no special arrangements and are virtually confined to their homes for fear of arrest or possible ‘deportation’ to the West Bank beyond the Barrier.

Approximately 23 families, some 140 people, live in a number of scattered communities between Jerusalem and Bethlehem. The Barrier has physically separated them from the Bethlehem urban area, which serves as their main service hub, livelihood and social centre, and which they can now only access through the Gilo Checkpoint. Although almost ninety per cent are registered refugees, UNRWA has been unable to continue its mobile health services in the area due to financial constraints.

Due to COVID-19 restrictions, residents were prevented from entering Bethlehem after the PA declared a State of Emergency across the oPt on 5 March, which closed down Bethlehem after the first cases were confirmed in the city. Additionally, the Israeli authorities closed the Gilo checkpoint on 8 March.

Following an intervention from the International Committee of the Red Cross (ICRC), the Israeli Authorities permitted some residents to enter Beit Safafa, a Palestinian locality inside the Jerusalem municipal boundary, to buy food and other essentials. However, this ended after COVID 19 cases were detected in that community. In early May, UNRWA distributed food parcels and medication for non-communicable diseases to all families in need in that enclave and continue to communicate with the communities regarding their needs. Following a household rapid needs assessment, some NGOS managed to provide food, hygiene kits and other support to the communities. 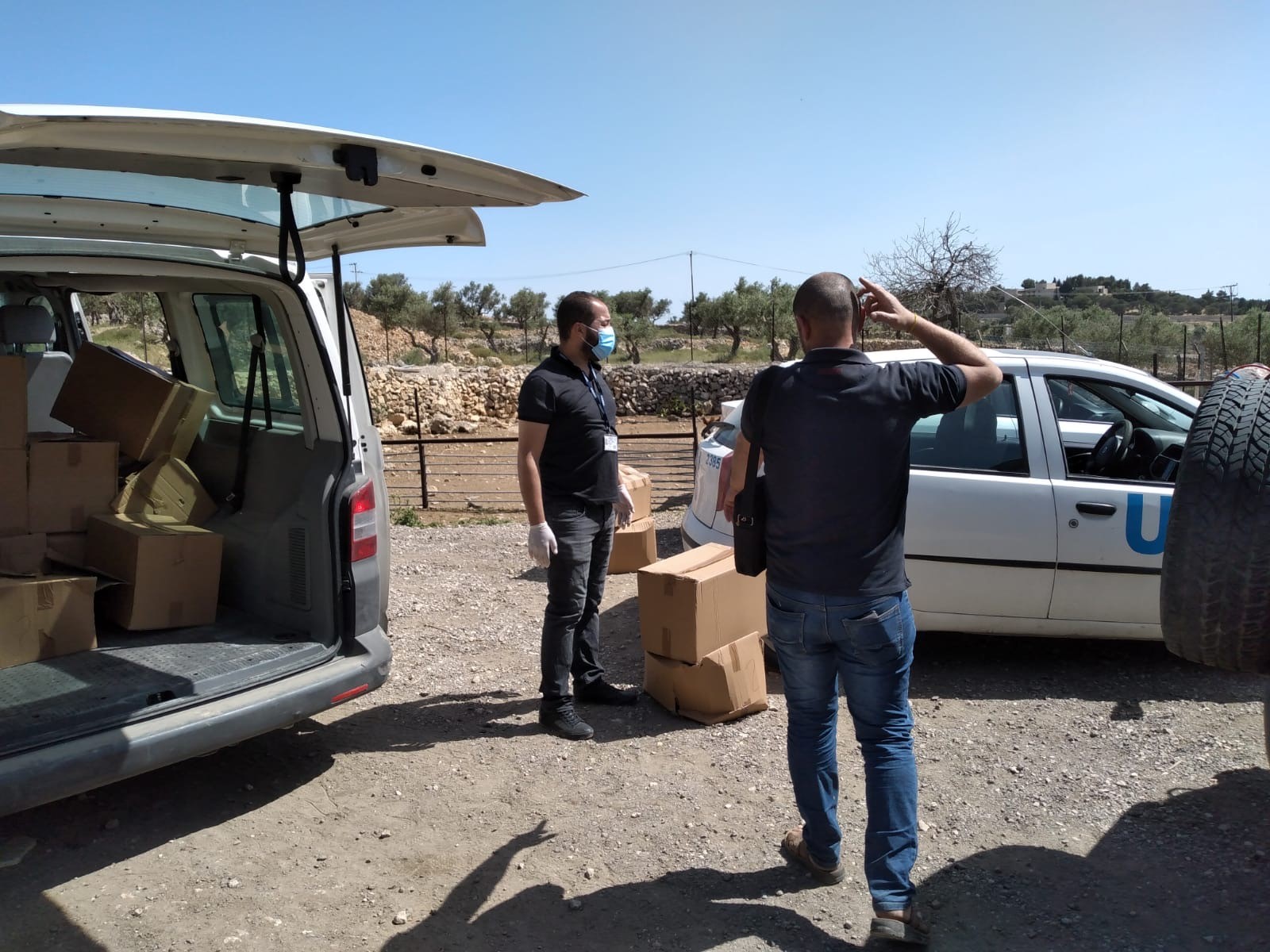 The International Court of Justice (ICJ): the Wall must be dismantled

In its advisory opinion on the Legal Consequences of the Construction of a Wall in the Occupied Palestinian Territory, the ICJ recognized that Israel ‘has to face numerous indiscriminate and deadly acts of violence against its civilian population’ and that it ‘has the right, and indeed the duty, to respond in order to protect the life of its citizens. [However], the measures taken are bound nonetheless to remain in conformity with applicable international law.’

The ICJ stated that the sections of the Barrier route that run inside the West Bank, including East Jerusalem, violated Israel’s obligations under international law. The ICJ called on Israel to cease construction of the Barrier ‘including in and around East Jerusalem’; dismantle the sections already completed that are situated within the OPT, including in and around East Jerusalem; and ‘repeal or render ineffective forthwith all legislative and regulatory acts relating thereto.’[4]

Since the advisory opinion, several re-routings of the Barrier in the northern West Bank have ‘reconnected’ a number of ‘Seam Zone’ communities to the remainder of the West Bank. However, none of these amendments re-routed the Barrier to the Green Line or to Israel, as per the ICJ advisory opinion, but rather were implemented following decisions issued by the Israeli High Court of Justice.

To reduce the humanitarian hardship of affected Palestinians, Israel should dismantle, or re-route, the constructed sections to the ‘Green Line’, in line with the ICJ advisory opinion. Meanwhile, the Israeli authorities should repeal the gate and permit regime and ensure freedom of movement for residents and farmers. Under international human rights law, restrictions to that freedom should be imposed only for national security, public order or public health reasons, while ensuring that they are necessary, proportional to the end sought, not discriminatory and that the basic rights and needs of affected people are taken into consideration,  including their rights to health, work and an adequate standard of living. 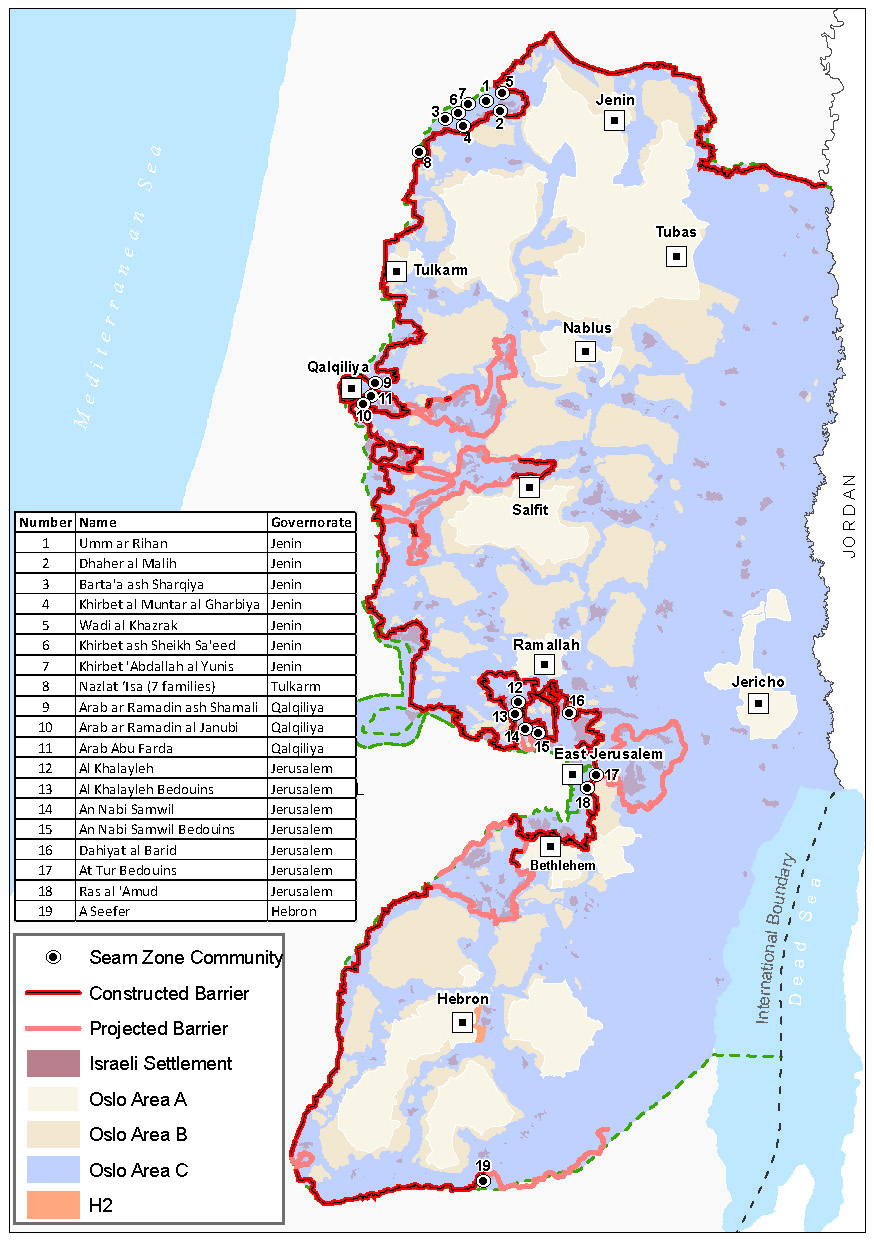 [1] In certain areas not designated ‘closed’, residency and access are controlled by means of ID cards and subject to verbal approval from the Israeli authorities, referred to as ‘prior coordination.’

[2] The majority of East Jerusalem Palestinians also reside between the Barrier and the Green Line, but this area has not been declared closed, and their freedom of movement or residency has not been affected by regulations related to the Barrier.

[3] ‘Seam Zone’ residents are prohibited from entering Israel, although there is no physical obstacle to prevent them from crossing the Green Line.