July recorded the highest number of structures demolished or seized, and of people displaced, 54 and 97 respectively, since January 2017. However, the cumulative number of structures targeted so far in 2018 (251) has remained below the figure in the equivalent period of 2017 (286). All of the incidents during July took place on grounds of lack of building permits. 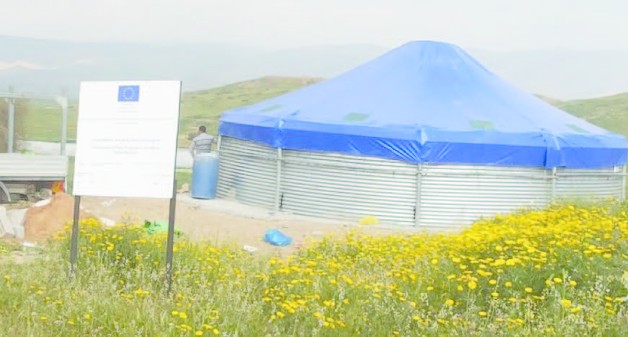 The largest incident took place on 4 July in the Palestinian Bedouin community of Abu Nuwar, in Area C of the Jerusalem governorate, where 19 structures were demolished, including residences, animal sheds, kitchens and a mobile latrine. Although none of the structures demolished was donor-funded, three EU-funded water tanks were damaged during the incident. Overall, 51 people, including 33 children, were displaced and another 13 were affected.

In the nearby community of Jabal al Baba, a caravan funded by an EU Member State that served partly as a kindergarten and partly as a women’s centre and (once a week) as a clinic, was seized. This structure was self-dismantled by the community in April 2018, upon receipt of a seizure warning, and re-installed the following month.

The expected demolition of the entire community of Khan al Ahmar-Abu al Helu, in the same area, was temporarily delayed following the filing of two new petitions to the Israeli High Court of Justice, which are being heard in August. In the meantime, the Israeli military requisitioned land to begin works on roads leading to the community, and temporarily declared the area a closed military zone, prohibiting non-residents from entering the community. Access for the provision of regular humanitarian relief services, including by the mobile health clinic and mental health teams, was delayed or prevented on a number of occasions.

The three Palestinian Bedouin communities are among 18 located in or around the E1 settlement plan area, to the east of Jerusalem, which face the risk of forcible transfer due to the coercive environment exerted on them.

Also in Area C, the Israeli authorities demolished a large water reservoir in the herding community of Al Farisiya (Tubas) in the northern Jordan Valley. The reservoir was provided as humanitarian assistance with funding from EU Member States, and had provided access to water to 22 families, comprising 148 people. The community is sandwiched between two settlements and previously faced mass demolitions, in February 2016.

In Barta’a ash Sharqiya, a village located in the closed area behind the Barrier in the Jenin governorate, the Israeli authorities issued stop-work orders against 17 structures, including four inhabited homes built 30 years ago. No demolition or stop-work orders against donor-funded structures were recorded during July. (For comprehensive data on demolition orders in Area C, see: OCHA Dashboard).

Of the 20 structures demolished during the month in East Jerusalem, two (both residential) were self-demolished by their Palestinian owners, in the Beit Hanina area, following an Israeli Supreme Court ruling in favor of Israeli settlers claiming ownership over the land on which the homes were built. As a result, 19 people, including eight children, were displaced. Independently from the eviction case at the court, the houses had pending demolition orders on grounds of lack of building permits. In recent decades, Israeli settler organizations, with the support of the Israeli authorities, have taken control of properties within Palestinian neighbourhoods in East Jerusalem, and some 180 Palestinian families are currently facing eviction cases, filed mainly by settler organizations.