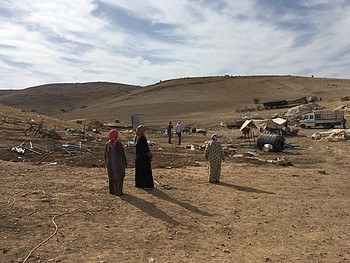 At around 8:00 on the morning of 27 September, without any prior warning, members of the Israeli Civil Administration and Israeli army descended upon five Palestinian refugee households of the same family in Tell el Himma and began to demolish all their structures. These included five residential structures, one guest room, four animal structures, one fodder storage, three toilets, one traditional oven, two kitchens and one solar panel unit. During the demolition, food items, personal belongings, and children’s toys and bicycles were also damaged. At the time, most of the family members were out. The head of the family and his wife were driving their 35-year-old disabled son to be operated on in a Jenin hospital, but had to abruptly cancel the operation and rush back home when they learned of the demolition.

This was not the first time the family had experienced the demolition of structures by the Israeli army.[1] However, the scale of the damage on this occasion was the most devastating economically, socially and psychologically. It reduced their existence to a bare minimum, leaving them feeling “imprisoned and broken,” as a family member put it.

Since the demolition, the army regularly enters the family’s site, sometimes five times a day, to ensure no reconstruction has taken place. “We are constantly harassed by soldiers who tell us, “Why are you still around? You have to leave”, a member of the family said. They have been unable to milk their sheep or produce cheese, their main source of livelihood. Since 22 September, one week before the demolition took place, the family has been unable to graze their 350-400 head of livestock freely for fear of settler harassment from what appears to be a new outpost just a few hundred metres away from their homes. The family reported that settlers from this outpost have threatened them at gunpoint if they dare to graze their livestock close to the outpost.[2]

The women of the community bear the brunt of the demolition. Almost every aspect of their lives has changed for the worse. “We cannot go about our daily routine. We feel shackled,” said one of the women. “Before, by early afternoon we would be done with milking the sheep, making cheese, cooking, cleaning, washing and drying the laundry. We had a washing machine and a tumble dryer. We used to enjoy our afternoons watching TV and cooling down in front of the fan. Now all this has gone.”

Children, women and men are cramped in one tent, the only structure they were allowed to rebuild a few hours following the demolition, with no electricity or water, and no concrete floor. “We’re just like one big pile, with no privacy, nothing,” said another woman. “Sitting in this tent is like sitting in a hot oven. We have no cool water to drink, and the rice is no longer good for cooking, as it got infested with insects because of the heat,” they complained. An elderly woman who was upset that clothes and shoes had been buried under the rubble, sighed: “I’m stuck with only one pair of slippers and cannot find my shoes.” Women were especially distressed by the fact that the toilets were demolished. There is no place for them to wash or perform their ablutions. To enable the children to be clean for school, 34-year-old R. sent her four children, aged 8-12, to live on their own close to relatives in a village near Jenin. She only sees them at weekends now.

Despite the dire conditions, harassment and the uncertainties, the families maintain that they will persevere. “For as long as we are alive, we will not leave,” said the head of the family who was born in the area 65 years ago.

[1] Since 2009, four demolition incidents have taken place in Tell el Himma. These involved the demolition of 32 structures and the displacement of 50 people, including 21 children, and otherwise affected 29 people, including 12 children.
[2] On the new outpost, see Amira Hass, ‘Settlers Build New Illegal Outpost on Private Palestinian Land - With Israeli Authorities’ Knowledge,’ Haaretz, 23 October 2016.