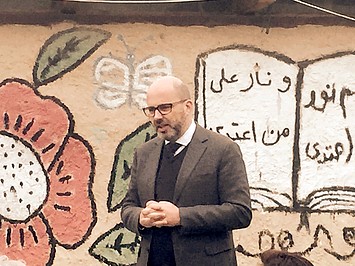 Today, the UN Coordinator for Humanitarian Aid and Development Activities for the occupied Palestinian territory, Robert Piper, and Director of UNRWA Operations in the West Bank, Scott Anderson, visited the Palestinian Bedouin community of Khan al Ahmar in Area C, in the immediate outskirts of East Jerusalem.

“Khan al Ahmar is one of the most vulnerable communities in the West Bank, struggling to maintain a minimum standard of living in the face of intense pressure from the Israeli authorities to move to a planned relocation site,” said Mr. Piper. “This is unacceptable and it must stop.”

On 15 and 19 February, Israeli officials distributed dozens of military ‘stop work’ and demolition orders threatening nearly every structure (approximately 140 in total) in one of the community’s sites (Abu Al Helu). The enforcement of these orders would directly impact the homes and livelihoods of over 140 Palestine refugees, more than half of them children. Also among the affected structures is the primary school, made of tires and mud, which was built with the support of international donors and serves around 170 children from Bedouin communities in the area. 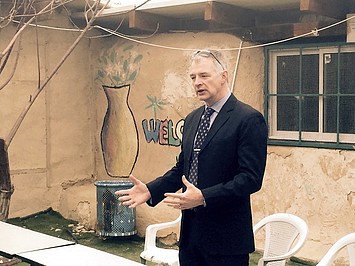 As elsewhere in the West Bank, the recent orders were issued on the grounds that the structures lack Israeli-issued building permits; permits which are largely impossible to obtain in most of the 60% of the West Bank known as ‘Area C’, due to the discriminatory planning and zoning regime imposed by Israel.

“The developments in Khan al Ahmar are not unique,” said Mr. Piper. “Thousands of families live in fear of demolitions at any moment, and entire communities exist in chronic instability. When schools are demolished, the right to education of Palestinian children is also threatened. This creates a coercive environment that forces certain Palestinian communities to move elsewhere. ”

“The international community must work together to provide assistance and protection to vulnerable communities and insist that international law is respected,” he concluded.

The UN has repeatedly stated that the imposition of the proposed ‘relocation’ of communities without their free and informed consent would amount to forcible transfer and eviction, contravening Israel’s obligations as an occupying power under international law. 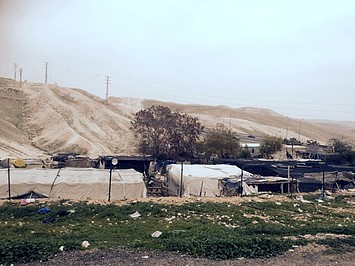 “The entire existence of this community, the homes, animal sheds and school that we visited today, is under threat. I am gravely concerned about Israel’s continued pressures to force these Bedouin from their homes, destroying their livelihoods and their distinct culture”, said Mr. Anderson. “Many of these Palestine refugee families have already had their homes demolished several times within the last couple of years. I urge the Israeli authorities to halt all plans and practices that will directly or indirectly lead refugees to be displaced once again.”

Khan al Ahmar is one of 46 communities in the central West Bank (combined population of approximately 7,000, of whom 70 per cent are Palestine refugees) which the UN assesses as at risk of forcible transfer due to Israeli plans to move them to one of three designated ‘relocation’ sites, which would be a grave breach of the Fourth Geneva Convention.