Mass demonstrations along Israel’s perimeter fence with Gaza took place again today for the fifth consecutive Friday, as part of the ‘Great March of Return’, which is expected to continue up to 15 May. As of 21:00, three Palestinians were killed by Israeli forces and around 955 people needed medical attention, including at least 76 children and 39 women, according to the Ministry of Health (MoH) in Gaza. Of the total injuries, 178 resulted from live ammunition. Eight of those injured are in a critical condition.

The overall number of participants in today’s demonstrations was estimated at 10,000, higher than last Friday. The gatherings took place at the five tent camps located at 600 metres distance from the fence, approximately 50 metres closer than last week. As has occurred on previous Fridays, following noon prayers, hundreds of demonstrators marched from the tent camps towards the fence, where they burned tires, attempted to damage the fence, threw rocks and, according to Israeli sources, fire bombs at Israeli forces. On several occasions, demonstrators reportedly flew kites with flaming materials attached to them into Israeli territory. Some reports indicate that some protesters broke through the fence east of Gaza city and also damaged the fence in other locations. Israeli forces responded to the demonstrations by firing rubber bullets and tear gas canisters, also dropped from drones, and by firing live ammunition, including by snipers. 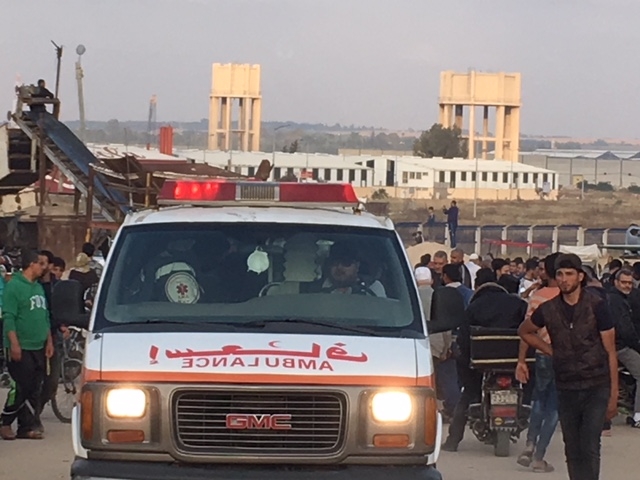 Overall, since the beginning of the protests on 30 March, 38 Palestinians, including four children, were killed by Israeli forces during the course of the demonstrations. In addition, five Palestinians were killed in Gaza in other circumstances and another two were killed after crossing the fence into Israel. Over 6,400 Palestinians, including at least 530 children, were injured by Israeli forces, according to the Palestinian Ministry of Health (MoH) in Gaza. Of these, approximately 3,897 people (61 per cent) of the total injuries have been hospitalized, including 1,917 from live ammunition. There have been no reports of Israeli injuries.

The large number of casualties among unarmed demonstrators, including the high percentage of demonstrators injured by live ammunition, has raised concerns about excessive use of force, alongside calls for independent investigations of these incidents, including by the UN Secretary-General. Earlier today, 27 April, the UN High Commissioner for Human Rights called on Israel to ensure that its security forces do not resort to the use of excessive force and also called for those responsible to be held accountable. “The loss of life is deplorable, and the staggering number of injuries caused by live ammunition only confirms the sense that excessive force has been used against demonstrators – not once, not twice, but repeatedly.  I am doubly concerned by reports of unusually severe injuries resulting from the use of live ammunition. Furthermore, many of those seeking treatment outside of Gaza have been refused permits by Israel to leave, which has increased the suffering.”

The UN Special Coordinator also reflected concern on the high number of Palestinian injuries in his briefing to the Security Council on 26 April, stating: “I take this opportunity to reiterate Mr. President, in the strongest possible terms, that civilians, particularly children, must not be intentionally put in danger or targeted in any way. Everyone must ensure that civilians are able to exercise their right to demonstrate peacefully.”

The Israeli authorities have stated that many of the fatalities were members of Hamas and other armed groups and have accused the MoH of inflating the number of those wounded by live ammunition. Israel has also stated that a fact-finding mechanism will review the use of force, including incidents of fatal shooting.

Humanitarian actors have identified three areas of intervention that are critical to respond to the urgent needs arising from the ongoing protests in Gaza: providing immediate life-saving healthcare; monitoring, verifying and documenting possible protection violations; and scaling up the provision of mental health and psychological support for people injured or otherwise affected by the events. Some US$ 5.3 million is urgently required to scale up the immediate response until 31 May 2018, the expected six-week duration of the demonstrations, plus an additional two weeks to ensure immediate response to any affected on 15 May. On 25 April, the Humanitarian Coordinator released $2.2 million available in the oPt Humanitarian Fund (HF) reserve for unforeseen emergencies, to support the three areas of intervention. The health response is the main priority, given the enormous rise in casualties against the backdrop of a health system on the verge of collapse. The Health Cluster will utilize the $1.8 million released in the HF to deploy surgeons to Gaza to conduct lifesaving surgery; initiate rehabilitation outreach teams; enhance post-operative care; and provide lifesaving medical supplies. 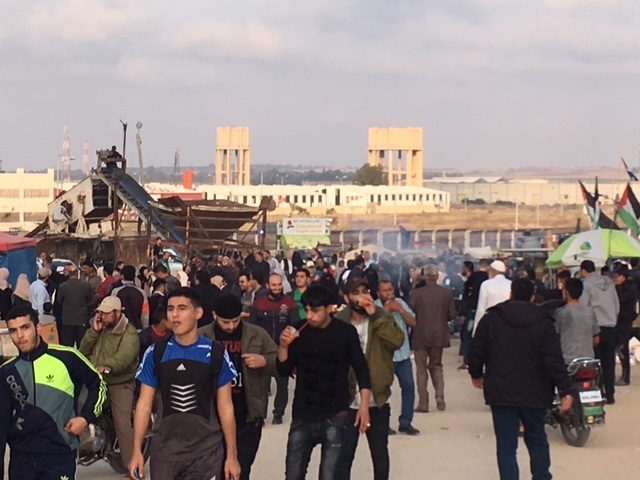 A large percentage of patients hospitalized since the start of the demonstrations suffered severe wounds to the lower extremities, requiring complex surgical operations; many of them will have disabilities for life. The MoH, along with the Palestinian Red Crescent Society, have established medical trauma stabilization points (TSP) next to the five tent camps, to stabilize injuries before referring them to nearby hospitals. WHO is upgrading these TSPs to improve the frontline response in the field and is also enhancing the data collection of patients treated at the TSPs. Treatment in one of the TSPs was interrupted for at least one hour today as a result of teargas firing by Israeli forces and at least nine medics were treated from suffocation as a result of the teargas inhalation.  From 30 March to 23 April, at least 77 health personnel were injured and 14 ambulances damaged, according to data provided by the Palestinian Red Crescent Society and the MoH in Gaza.

The Protection Cluster has been closely following the situation, collecting information relevant to its protection mandate, including for identification of urgent humanitarian needs and ways forward to address possible gaps in response, in coordination with the Health and Education clusters and OCHA. Protection Cluster partners continue to provide legal aid by petitioning the Israeli justice system on behalf of individuals in need of travel permits for urgent treatment outside Gaza.

The exposure to violence has also had significant mental health and psychosocial (MHPSS) ramifications, particularly among children. Protection Cluster partners specialized in MPHSS have provided initial psychosocial support to at least 171 traumatized children, affected by different types of injuries, out of at least 505 so far identified. Of them, 22 children with critical and severe injuries (live and rubber bullets) in need of more specialized care were referred for case management. In addition, school counsellors identified 258 children in need of psychosocial support with initial treatment provided for 187 cases and 70 affected people accessed counselling through a free hotline number since 30 March. More than one thousand adults in need of MHPSS responses have been also identified and about 342 were reached with initial psychosocial support.