Significant increase in agricultural exports/transfers from Gaza during 2016

The main export/transfer[8] season for Gaza’s agricultural produce began in December. The volume of produce leaving Gaza has risen since late 2014, following the easing of Israeli restrictions on the exit of goods to markets in the West Bank and Israel. Revenues in 2016 (up to 8 December) totaled $11.9 million, an increase of almost 80 per cent compared with 2015 ($6.7 million) and more than five times higher than 2014 revenues ($2.2 million). Despite this improvement, 2016 revenues are about half of those recorded in 2007 when the blockade was imposed.

The strawberry sector struggling to recover

Strawberries are one of the highest value crops and accounted for over one-third of export/transfer revenues prior to the blockade in 2007. The severe restrictions imposed over the past decade have created strong disincentives for farmers to grow strawberries as the produce could end up saturating the local market, where farmers obtain less than 30 per cent of the value received from external markets, if they manage to sell their produce at all.

Restrictions on strawberry transfers were eased in the middle of the 2015 season when the first truck was allowed to exit for the West Bank. No quotas are currently in place for sales of Gazan strawberries to the West Bank, EU or Russia, while export to Israel remains banned. Assuming no additional restrictions, an estimated 400 tonnes of strawberries worth more than $1 million could be exported, doubling the revenue obtained during the 2015-6 season.[9] 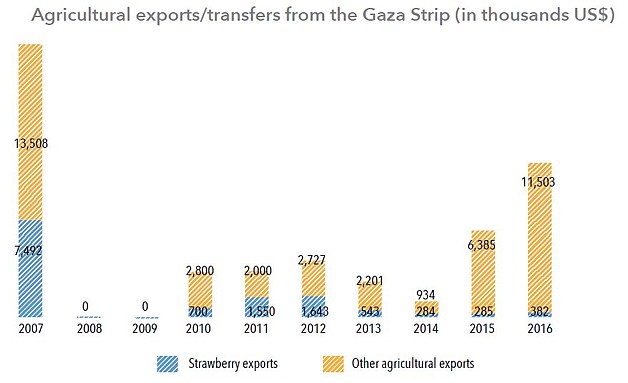 Despite significant growth in the volume of produce marketed outside Gaza in the past two years, current restrictions continue to prevent a more significant recovery in the agricultural sector, particularly strawberries. Restrictions include: limited quotas on the quantity and variety of exports allowed to reach Israeli markets;[10] severe restrictions on imports of some agricultural inputs classified by Israel as ‘dual-use’ items, such as fertilizers at certain concentrations, wood panels and steel pipes of specific diameters;[11]delays in the exit of fresh agricultural produce due to prolonged inspections at the Kerem Shalom crossing; limitations on the height of cargo trucks allowed through this crossing of 1.6 metres rather than the 1.9 metre international standard; and restricted access by farmers to areas within 300 metres of the perimeter fence with Israel.

Agriculture as a coping mechanism

As the blockade enters its tenth year, the socio-economic gap between the Gaza Strip and the West Bank shows no signs of narrowing. By the third-quarter of 2016 the unemployment rate across the Gaza Strip stood at 43.2 per cent compared to 19.6 in the West Bank.[12] In Gaza, 47 per cent of households were estimated to be moderately or severely food insecure.[13]

The drop in agricultural value added from 2013 to 2014 reflects a significant reduction in the cropping area due primarily to the damage inflicted during the July-August 2014 hostilities (from 201,000 dunums to 187,000 dunums).[15] Despite extensive efforts,[16] nearly half of the agricultural land damaged during the conflict has not yet been rehabilitated. 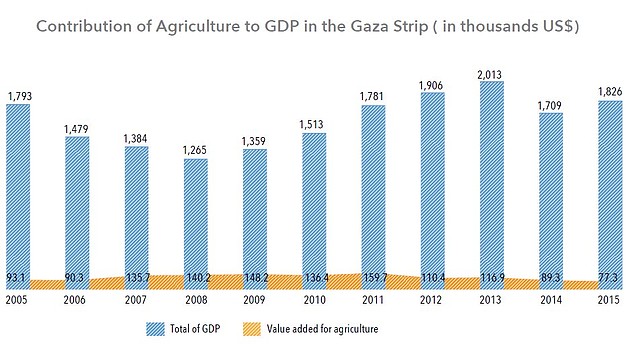 * This article is contributed by FAO.

[8] Transfers refer to products leaving Gaza to the West Bank.

[9] Calculated using the farm gate price of 10 shekels per kilogramme.

[10] Currently, the Israeli government allows 250 tonnes of tomatoes and 50 tonnes of eggplant to enter Israel from the Gaza Strip.

[14] This shift also coincided with the opening of tunnels along the Egyptian border, which was associated with a decline in the number of agricultural workers as labourers moved to working in the tunnels.