as part of
The Monthly Humanitarian Bulletin | January 2018

Following the United States’ recognition of Jerusalem as the capital of Israel on 6 December 2017, the occupied Palestinian territory (oPt) experienced heightened tensions and violence, mainly Palestinian protests and clashes, which resulted in a significant rise in casualties versus previous months. As of 30 January 2018, 20 Palestinians and one Israeli had been killed, and over 5,000 Palestinians and 17 Israelis injured.[1] Some of the incidents during this period have raised concern about possible excessive use of force by Israeli forces. Against the backdrop of the dire humanitarian situation in the Gaza Strip, the limited escalation observed in recent weeks across the Gaza-Israel boundary raises particular concern because of its potential to trigger a new round of hostilities. 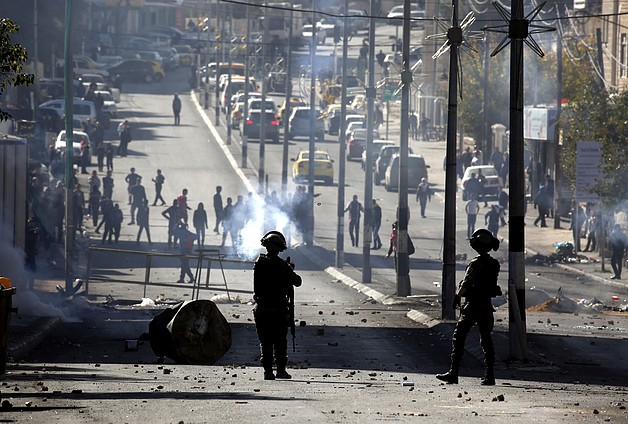 Seventeen (17) of the Palestinian fatalities during this period occurred during confrontations with Israeli forces, mostly following protests against the US announcement on Jerusalem, as well as during some of the over 650 search and arrest operations carried out by Israeli forces. Of these fatalities, eight occurred in the West Bank and nine in the Gaza Strip, and four were children (aged between 15 and 17).

During these clashes, Palestinian demonstrators throwing stones confronted Israeli forces, to which the latter responded by firing tear-gas canisters, rubber bullets and/or live ammunition, or by physically confronting the protesters. One of the fatalities was shot and killed while reportedly attempting to stab an Israeli soldier during one of the protests next to Beit El checkpoint (Ramallah). Another was killed, reportedly in an exchange of fire, during a search and arrest operation in Jenin city. According to Israeli sources, the operation was conducted to apprehend the perpetrators of a drive-by killing by Palestinians of an Israeli settler in the Nablus area on 9 January.

Such clashes accounted for nearly all of the over 5,100 Palestinian injuries recorded during this period, 60 per cent of them caused by tear gas inhalation requiring medical treatment, followed by injuries from rubber bullets and live ammunition. Clashes in the Gaza Strip involving Israeli forces deployed on the Israeli side of the perimeter fence accounted for half of the fatalities and 21 per cent of the injuries. In the West Bank, the protest ‘hotspots’ were the checkpoints at Huwwara (Nablus), Beit El (Ramallah), Qalandiya (Jerusalem) and Gilo (Bethlehem); the Israeli-controlled area of Hebron city (H2); the entrance to Jericho city; and some of the entrances to Jerusalem’s Old City.

In response to the level of casualties during clashes along the fence in Gaza, the UN High Commissioner for Human Rights raised “serious concerns as to whether the force used by Israeli forces was properly calibrated to the threat”, and called on Israel to open independent and impartial investigations into incidents that have resulted in injury or death, “with a view to holding the perpetrators accountable for any crimes committed”.

Also in the Gaza Strip, some Palestinian armed factions, which reportedly excluded Hamas, fired dozens of rockets and mortars indiscriminately towards southern Israel. Only a small number actually landed in Israel, resulting in limited property damage but no casualties, and the remainder either fell short inside Gaza or were intercepted in the air by Israeli missiles. In response, the Israeli air force launched a series of airstrikes targeting military sites in Gaza, killing three Palestinians, including a civilian and two members of an armed group, and injuring 25 civilians, including nine children.

The highest number of Palestinians injured by Israeli forces in a single month in 2017 (14 fatalities and 4,574 injuries) was in December. This was followed by July (14 fatalities and 1,771 injuries) when widespread protests and clashes took place due to the installation of metal detectors at the entrance of the Haram Ash Sharif/Temple Mount in Jerusalem. 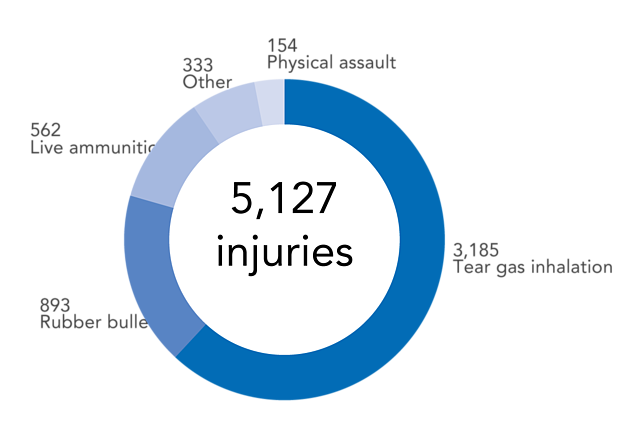 Concerns about excessive use of force: a case study [2] 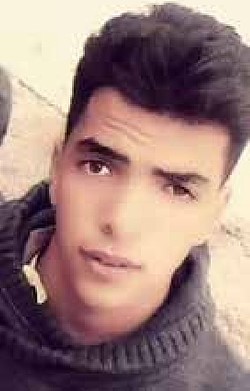 On 3 January 2018, a 16-year old Palestinian boy from Deir Nidam village, northwest of Ramallah, was shot and killed by an Israeli soldier during clashes. The clashes reportedly erupted as children began throwing stones at Israeli forces in an attempt to secure the release of a mentally ill 18-year-old man detained by the soldiers.

According to eyewitnesses, the soldiers responded by firing live ammunition to disperse the youths without trying to use less lethal means. The initial shots struck rocks by the boys, who stopped the stone-throwing and took shelter on the side of the road approximately 70 meters away from the soldiers. Eyewitnesses reported that one of the boys stepped into the middle of the road, apparently to see where the soldiers were standing, and was struck in the neck by a live round fired by a soldier partially concealed by olive trees.

According to the Israeli media, the IDF claimed that, “the soldiers said he (the victim) appeared to be holding a gun, prompting them to open fire”. The spokesperson added that it was not immediately confirmed that the boy had been armed at the time of the shooting, and that the circumstances were being investigated. A video and photos taken by activists present during the events confirm that the boy was not carrying a weapon when he was shot.

Palestinian and Israeli fatalities by month* 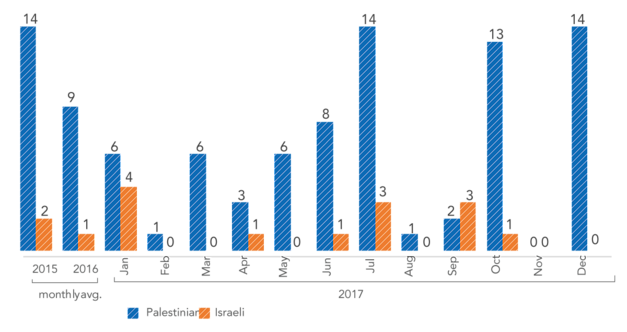 [1] Source for data on casualties is OCHA’s Protection of Civilians database.