At the end of January, UNRWA completed a comprehensive revision of the contents of its food assistance rations aimed at improving them against three main criteria: (i) health and nutritional values; (ii) public acceptability and local food habits; (iii) availability and logistical practicalities. The new baskets will be launched during the April-June food distribution round for all 960,000 beneficiaries.

The revision process was highly participatory and the views of beneficiaries were captured through ad hoc consultations, focus groups and periodic surveys. An extensive outreach campaign on the new food baskets will be rolled out during February and March to ensure that all questions and concerns of beneficiaries will be addressed.

Additionally, UNRWA will adjust its distribution methods to improve fairness. The new method will be based on the actual number of household members rather than on pre-defined family size groups. Each beneficiary household will receive a food basket calculated by multiplying the per capita ration by the family size. 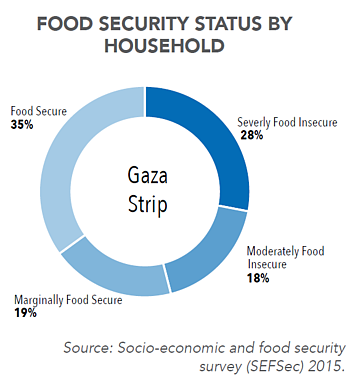 Recurrent hostilities, combined with the blockade and the resulting constraints on productive capacities, have resulted in high unemployment and low incomes. Together with a high cost of living, one million Palestinians in the Gaza Strip are now moderately to severely food insecure. Although food is available, it is priced out of reach for many. These households are food insecure despite food assistance and other forms of social transfers from the Palestinian Authority and humanitarian organizations.

Food insecure families in poverty spend half their income on food. Food assistance enables scarce cash resources to be spent on other essentials such as education, health and clean water. This prevents further deteriorations in food security and livelihood status, and avoids the use of negative coping mechanisms.

Unemployment in the Gaza Strip, 38.4 per cent in the last quarter of 2015, remains the highest in the world and one of the main drivers of food insecurity. Youth unemployment, which exceeds 60 per cent, is particularly alarming. Lower household incomes, poor food utilization due to poor quality water, sanitation and hygiene, limited access to health care, and the declining quality of diets also contribute to food insecurity.

Approximately 50 per cent of the Palestinian population suffer from more than one micronutrient deficiency, particularly female adolescents in Gaza where 72 percent are deficient in vitamin D and 64 percent are deficient in vitamin A. Preliminary findings from an IDP survey in Gaza reveal a high number of families incurring debt to purchase food, in addition to other negative coping mechanisms related to food consumption and diversity.

* This article was contributed by UNRWA