Published as part of
The Monthly Humanitarian Bulletin | January 2017 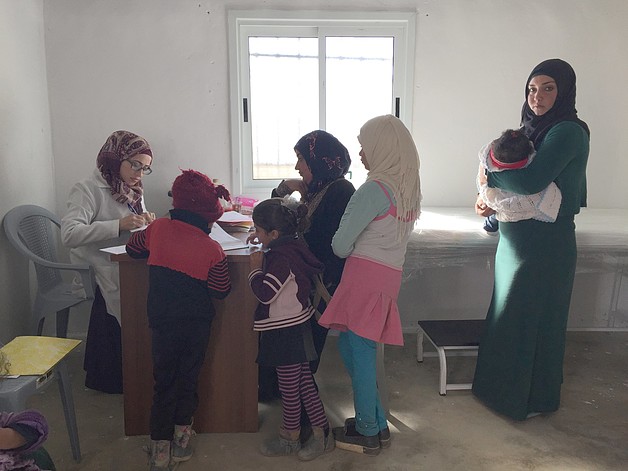 During January 2017, OCHA recorded the demolition of 140 structures by the Israeli authorities, displacing around 240 Palestinians and affecting another 4,000. The number of structures demolished during the first month of the year was over 50 per cent higher than the monthly average of structures targeted in 2016 (91). All of these demolitions were carried out in Area C and East Jerusalem on the grounds of lack of building permits, although these are nearly impossible to obtain for Palestinians.

The largest incident took place on 3 January where nearly 50 structures were demolished in the Palestinian herding community of Khirbet Tana (Nablus). This was the fifth demolition incident experienced by this community since the start of 2016. Khirbet Tana is located within an area designated as a firing zone for Israeli military training. Firing zones are closed areas and constitute about 30 per cent of Area C. They are home to more than 6,200 vulnerable Palestinians, many of whom resided there prior to the area being designated as closed.

On 11 January the Israeli authorities destroyed sections of a dirt road connecting agricultural land in Area C to the community of al Buweib (Hebron), rendering it inaccessible to vehicles, and affecting the livelihoods of some 3,000 people living in the Masafer Bani Naim area (Hebron).

In East Jerusalem, a ramming attack on 8 January that killed four Israeli soldiers and injured 15 others prompted the Jerusalem Municipality to adopt several measures in the Jabal al Mukabber neighbourhood, where the perpetrator of the attack had lived. These included the demolition of 11 non-residential structures on the grounds of lack of a building permit and the distribution of “warning notices” for approximately 80 buildings for planning and zoning “violations.” A preliminary assessment carried out by OCHA indicates that up to 240 households (approximately 1,200 people) living in these buildings may be at risk of displacement if follow-up measures are implemented.

During 2016 the Israeli authorities demolished or seized 1,093 Palestinian-owned structures throughout the West Bank, including East Jerusalem, displacing over 1,600 Palestinians, around half of them children, and affecting the livelihoods of more than 7,000 others. These figures are nearly double those of 2015 and the highest since 2009, when OCHA began the systematic monitoring of demolitions.

The vast majority of these structures were located in Area C and East Jerusalem and were destroyed or seized for lack of an Israeli-issued building permit. The rest were demolished on punitive grounds or during military operations. Nearly 30 per cent (308) of the structures demolished in 2016 were donor-funded humanitarian assistance structures. This figure is nearly three times higher than that for 2015 (108 structures) and the value of the assistance destroyed or seized is estimated at over €655,000.

More than 63 per cent of the structures demolished or seized during the year were in Palestinian herding and/or Bedouin communities in Area C, including 283 structures provided as humanitarian assistance. The demolition of homes and livelihoods in combination with access restrictions, lack of adequate services, settler violence, military training and relocation plans, generates a coercive environment and places these vulnerable communities at risk of forcible transfer (see case study on access to health care in southern Hebron).

According to new data provided by the Israeli Civil Administration (ICA), by the end of 2016 there were approximately 12,500 final demolition orders outstanding against Palestinian-owned structures across Area C.[1] Some orders were issued as far back as the late 1980s. The orders have no expiry date and can be implemented at any time. The data also indicate that nearly one quarter of these orders (over 2,900) are on hold due to legal appeals submitted to the ICA or Israeli courts.[2] In 2016, more than 100 donor-funded aid structures received demolition, stop-work and eviction orders, or verbal warnings.

Also according to ICA data, during the first half of 2016 there were 428 applications for building permits in Palestinian communities in Area C, of which 391 (91 per cent) were rejected. The majority of the 37 applications approved were reportedly issued independently by the Israeli authorities for one of the “relocation” sites planned for Palestinian Bedouin communities rather than a response to a Palestinian application. 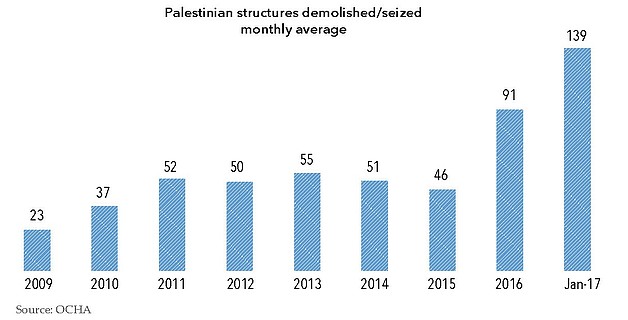 On 13 December 2016 the Israeli authorities seized a caravan in the Al Mirkez community in the Masafer Yatta area of Hebron, and also issued stop-work orders against two similar caravans at the end of January in the neighboring communities of Al Fakheit and Al Majaz, all on the grounds of lack of a building permit. The caravans were provided by an international NGO to serve as primary healthcare centers and are run by a mobile medical team visiting the communities once a week.[3]

The designation of this area as a firing zone for Israeli military training (Firing Zone 918) makes it very difficult for the residents of the 12 herding communities (pop. 1,300) located within it to access basic services, including healthcare. “Life in al Mirkez is very difficult. We cannot move freely and we face harassment from Israeli soldiers and settlers. We have asked the Palestinian Ministry of Health to provide us with health services all year round. My son has a disability and it’s hard for us to get the services he needs,” a resident of Al Mirkez told the World Health Organization (WHO).[4]

When OCHA visited the al Mirkez community on 11 January 2017, the day the medical team provides its weekly two-hour visit, the room serving as a substitute clinic was packed with about 15 women and children seeking treatment. The room was small and minimally furnished: a few chairs, two desks and one bed, and offered no privacy at all. It had no sink or water facilities to wash hands. One of the patients, an elderly woman, complained that two hours a week of healthcare is insufficient and it is very difficult and risky to reach the neighboring town of Yatta. “I became ill last week and had to lie in bed without treatment for days. When my situation deteriorated, I had to go to the town of Yatta,” she said. “The road to Yatta is not smooth. There is no public transport and the terrain is harsh, especially in winter. Cars are old and get stuck in the mud. One feels anxious about being delayed, sent back, or having the car confiscated by the Israeli army.”[5]

Two women who were waiting in the room with four children, including a seven-month-old baby, were from the neighboring community of Al Halaweh. The women and their children, accompanied by their father-in-law, had had to walk for more than one hour to reach the clinic. One of them, Amal, a mother of two, was diagnosed two years ago with systemic lupus erythematosus, a chronic auto-immune disease with symptoms that include swelling and damage to the joints, blood, kidneys, heart and lungs. “The journey was tiring for me and the children. We had to stop and rest on the way. Getting here is not easy for us. I wish we could have access to healthcare more than once a week and have it available also in Al Halaweh,” said Amal. “On rainy days the road takes more than two hours; sometimes we simply don’t come,” said Jameel, Amal’s father-in-law. “We don’t have a car and the clinic is far away. Amal has multiple illnesses: kidney problems and low platelet count, and needs her medication regularly.” 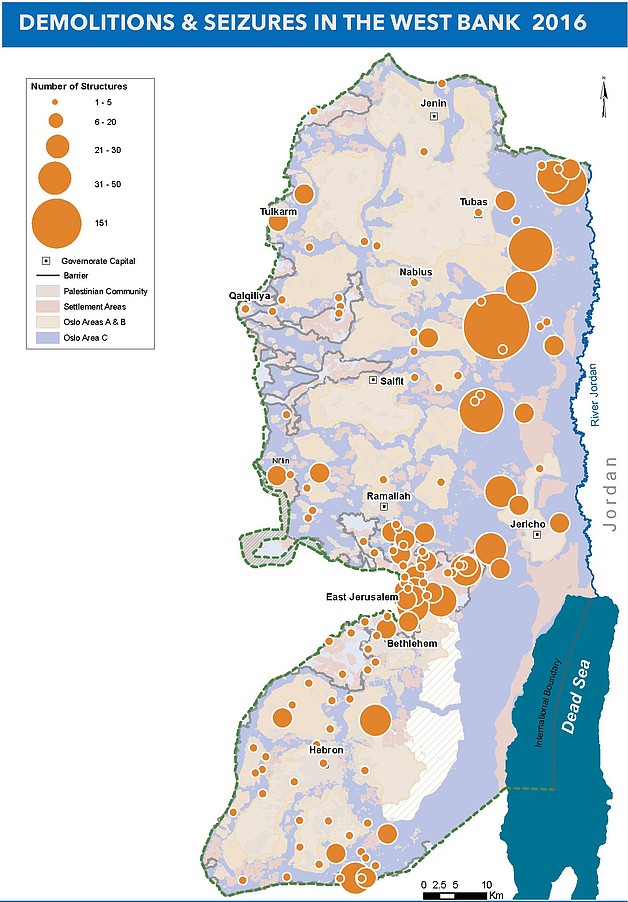 [1] Information based on a GIS layer obtained by Bimkom, Planners for Planning Rights, from the Israeli Civil Administration on the basis of the Israeli Freedom of information Act.

[3] Prior to the installation of the caravan clinics, Masafer Yatta residents were served by two clinics located in the Jinba and al Fakheet communities. The clinics were tents that lacked basic infrastructure for medical services.

[4] For further information on the communities of Masafer Yatta, see OCHA, May 2013, Life in a “Firing Zone”: The Masafer Yatta Communities.​

[5] The risk of vehicle confiscation stems from the fact that some residents have cars that are not registered.