Recent developments have exacerbated the vulnerability of Palestinians living in, or dependent on access to, an area in eastern Nablus governorate designated in the 1970s as closed for Israeli military training: “Firing Zone 904A”. These developments have included military exercises involving temporary displacement, property damage, disruption to life and new access restrictions. In recent years this area has witnessed increasing settlement activities, including violence and intimidation, alongside a reduced Palestinian presence.

The situation of Firing Zone 904A is not unique: about 18 per cent of the West Bank, or nearly 30 per cent of Area C, is designated by the Israeli authorities as firing zones for military training. These areas are home to 6,200 Palestinians living in 38 small Palestinian Bedouin and herding communities, including those in the eastern Nablus area. To different degrees, these communities have been affected by a coercive environment generated by a range of Israeli policies and practices that place residents at risk of forcible transfer.[1]

Between 17 and 24 June 2018, Israeli forces carried out a large military exercise in the area that disrupted the lives of approximately 250 residents of Tell al Khashabeh, a herding community on the southern edge of the firing zone.[2]

Two families living in the outskirts of the community, including 11 adults and four children, were ordered to evacuate their homes for three days. One of the residents reported that he had to move with his 200 sheep to Aqraba village, resulting in additional expenses for the purchase of fodder. No damage to the two homes or to animal structures was reported.

During the training, tanks and military jeeps drove over approximately 170 dunums of agricultural land planted with wheat and barley, owned by residents of the community, and damaged an agricultural water well, affecting 15 families. During the night, soldiers trained within the built-up area of the community, without opening fire, but causing fear among the residents.

Many of the structures in the community have demolition orders pending from the Israeli authorities on grounds of lack of building permits. The last demolition occurred in January 2017 when six structures were targeted, half of them provided previously as humanitarian assistance. 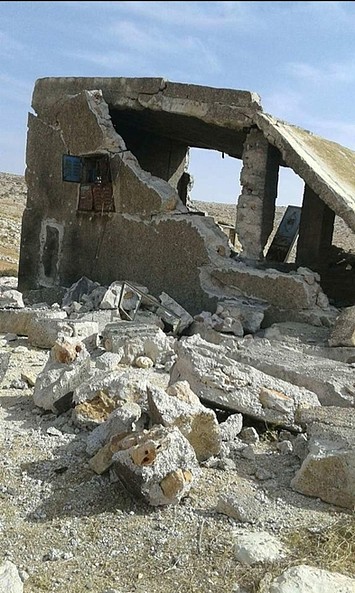 During another military exercise in October 2017, without prior warning or military order, Israeli forces destroyed a building in ad Dawa that had previously been used as a home and then turned into an agricultural storage facility. The owner of the building (see case study below) reported that among the rubble he had found the remains of wired explosives in the walls.

Located in the middle of the firing zone, ad-Dawa is a farming and herding area owned by five extended families comprising around 100 people. It was also used as a residential area on a seasonal basis. It is cultivated with citrus and olive trees, irrigated with water from a nearby spring, as well as a range of rain-fed crops. In the past, it also served as a grazing area.

Following the establishment of a settlement outpost in this area in 2013 (see below), families have faced systematic attacks and harassment that discourage them from accessing the area and force them to stop their seasonal residence in the area. In January 2018, for example, settlers from the outpost released dozens of cows into one of the citrus orchards, damaging at least 15 trees. Since 2014, access to the area requires prior approval from the Israeli army.

Although Yanoun is located just outside the firing zone, during the night of 14 June 2018, Israeli forces conducted military training within the built-up area of the community. According to eyewitnesses, soldiers opened fire at one uninhabited house. While the incident ended without injuries or additional damage (apart from the targeted house), it generated fear and anxiety among the residents, particularly children.

The community is encircled by settlement outposts on three sides (see map). Since the beginning of the second intifada in 2000, these outposts have been the source of constant violence and intimidation. Combined with severe access restrictions impeding access to services in Nablus city, Yanoun’s population has declined from some 200 before the second Intifada to less than 40 currently.

Like Yanoun, Lifjim, a herding community of about 100 people [3], is located just on the boundary of the firing zone and is affected by settler intimidation and access restrictions. On 24 July 2018, a group of Israeli settlers, reportedly from one of the Itamar outposts, entered the village at night. They dismantled and stole two donor-funded tents that had been provided as humanitarian assistance and were used for agricultural storage and as an animal shelter. The owner filed a complaint with the Israeli police.

In October 2017, the Israeli military installed a new road gate on one of the dirt roads leading to the firing zone from the east, next to Lifjim. The gate is closed and opened intermittently, further disrupting access by herders and farmers from Lifjim and other communities to areas within the firing zone.

With some 200 residents, this is the second largest community within the firing zone. While no incidents have been recorded there in recent months, the majority of the community’s structures are at risk of demolition on grounds of lack of building permits. In 2016, the community witnessed four waves of mass demolitions that targeted a total of 151 structures, including homes, a school, a mosque, animal shelters, water tanks, latrines and solar panels. The last demolition incident was recorded in January 2017. With the support of humanitarian agencies, residents have been able to rebuild some of their homes and sources of livelihood.

Currently, there are two unauthorized settlement outposts fully built within the boundaries of Firing Zone 904A as part of a chain of seven outposts extending from the settlement of Itamar eastwards. At the eastern end, built around 2013 as a residential site and cow farm, is an outpost known by Palestinians as “Kobi’s settlement”. According to Palestinians living and working in this area, this settlement has been a source of systematic violence and harassment.

Although the Israeli authorities have issued dozens of demolition orders against structures built in the two settlements, these orders have rarely been implemented. Despite being illegal under Israeli law, some of the seven settlement outposts have been connected to basic service infrastructure, including water and electricity. According to the Israeli NGO Kerem Navot, in recent months, settlers have been developing a series of dirt roads running across the firing zone (east-west) to link the chain of Itamar outposts with the “Allon Road” in the Jordan Valley (see Map).

Since 2012, the Israeli authorities have ratified declarations, originally made in the 1980s, that several land plots within the firing zone are “state land” (see map). Ratification by a body known as the Blue Line Team is a necessary step for the allocation of land for settlement expansion or for the retroactive “legalization” of unauthorized outposts.[4]

“It’s so frustrating to ask permission to go to my land!” 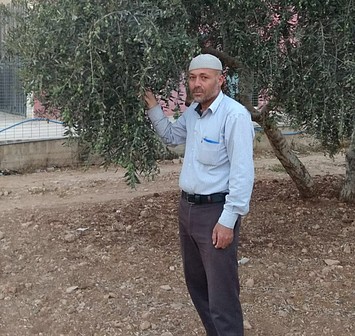 Nour Ghnaim and his three brothers inherited some 300 dunums of land in ad Dawa from their father. Part of the land is planted with olive and almond trees, and the rest used to be cultivated with wheat and barley.  According to Nour, prior to 2013 the four families made over $20,000 a year from the produce. The area was also used for grazing about 100 head of sheep, a source of additional income.

“Since 2013, we can only reach our land after coordination, for a few days in March for ploughing, and a few days in October-November for the harvest,” said Nour. “It’s so frustrating to ask permission to go to my land! Because of the lack of regular care, the productivity of the trees is very low. Many trees were damaged by the settlers’ cows and sheep. On a good year we used to produce up to 250 kilograms of dry almonds, compared with less than 30 kilograms last year.  We stopped cultivating the rest of the land and are forced to keep the livestock indoors, and spend a lot of money to purchase fodder.”

Referring to the house that was recently destroyed, Nour said, “I was born and raised in the house; all my childhood memories, my teenage years were there. It feels like I lost a part of me.”

[2] Due to their reliance on herding as a livelihood, a significant number of residents relocate to Aqraba village during summer.

[3] Due to reliance on herding as a livelihood, most residents relocate to a higher altitude during the summer.

[4] For further information about this procedure see: Kerem Navot, Blue and White make Black: The Blue Line Team in the West Bank, December 2016.