Published as part of
The Monthly Humanitarian Bulletin | March 2019

This month witnessed one of the most significant escalations of hostilities in the Gaza Strip and southern Israel since 2014, after a rocket was fired from Gaza on 25 March, severely damaging a house in central Israel and injuring seven Israelis. Following the incident, the Israeli Air Force struck multiple locations across Gaza, injuring two and displacing sixteen families, while Palestinian armed groups fired dozens of projectiles towards southern Israel, reportedly causing damage. The Israeli authorities also closed the Kerem Shalom and Erez crossings, allowing only movement of urgent humanitarian cases, and prohibited all fishing along the coast. A relative calm appears to be holding since 27 March.

On 30 March 2019, mass demonstrations took place along Israel’s perimeter fence with the Gaza Strip to mark the first year since the start of the ‘Great March of Return’ (GMR), which calls for the Palestinian right of return and the ending of the Israeli blockade. Three people, including two 17-year-old Palestinian boys, were killed and another 1,125 protestors were injured, including 82 by live ammunition, according to the Ministry of Health (MoH) and the Palestine Red Crescent Society (PRCS) in Gaza.  A fourth protester died of his wounds on 04 April.  Following the apparent restraint exhibited on the 30 March protests, the Israeli authorities reopened the Gaza crossings on 31 March and on 1 April extended the permissible fishing zone to 15 nautical miles (NM) from shore in southern Gaza, reportedly maintaining a more limited extension of six-12 NM in other areas. 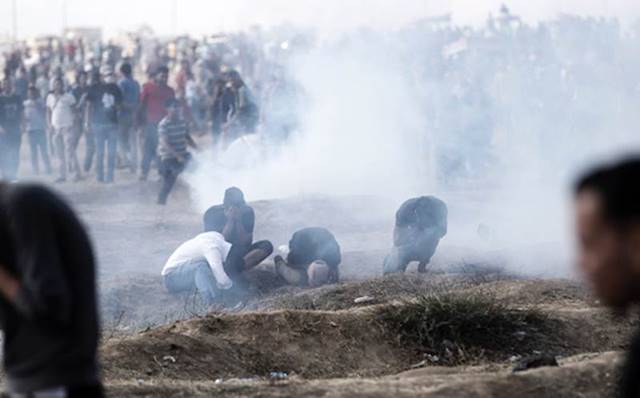 From the start of the GMR until 31 March 2019, 199 Palestinians, including 43 children, were killed by Israeli forces and nearly 30,300 Palestinians injured, including 25 per cent wounded by live ammunition. The large number of casualties among unarmed Palestinian protestors in circumstances that did not appear to constitute an imminent threat of death or serious injury to Israeli soldiers behind the fence, has raised concerns about excessive use of force by Israeli forces and the lack of protection, especially of children. On 18 March, the independent and international Commission of Inquiry into the protests in oPt, appointed by the United Nations Human Rights Council, released its final report, having investigated all 189 Palestinian demonstration-related fatalities between 30 March and 31 December 2018 and tracked more than 700 injuries. With the exception of two cases, the Commission found reasonable grounds to believe that the use of live ammunition by Israeli forces against protestors was unlawful.

The high number of trauma injuries during the GMR demonstrations has impacted the capacity of the Gaza health sector - already undermined by a lack of funds, years of Israeli blockade, the internal Palestinian political divide and a chronic energy crisis - to deliver essential services, In response, as detailed in the main item in this month’s Bulletin, humanitarian actors have prioritized the delivery of immediate life-saving healthcare, including coordination and support for forward trauma treatment points, the deployment of surgical teams, special shipments of medicines and medical supplies and the allocation of funds through the oPt Humanitarian Fund and the Central Emergency Response Fund.

Palestinians in Gaza have already been experiencing high levels of psychological distress and an estimated additional 10,420 people will have severe mental health problems, and 41,678 people will have mild to moderate problems, as a result of the GMR demonstrations. Humanitarian partners have responded by referring children to mental health and psychosocial support (MHPSS) services service providers and by strengthening the community level availability of such services to help affected populations to come to terms with the traumatic events and to prevent longer-term mental illness.

In the West Bank, including in East Jerusalem, the demolition of residential, livelihood and basic service infrastructure, on the grounds of a lack of Israeli-issued permits, continued in the first quarter of 2019 at a higher rate than in the previous two years. In addition to those displaced, the demolitions have impacted thousands more by the destruction of water connections and wells in communities suffering from water shortages across the West Bank, due to the absence of water networks and the difficulty of obtaining permits to constructing water systems. The other item in this month’s Bulletin focuses on three especially vulnerable communities following the Israeli authorities’ destruction and confiscation of water pipes in separate incidents in February.