The informal ceasefire understanding which concluded the escalation of hostilities in early May is still largely holding. June witnessed some easing of restrictions – the extension of the fishing zone, allocation of more business permits, disbursement of some of the Qatari-funded aid – which go some way to alleviating the humanitarian situation in Gaza.

However, there is still no resolution of the financial crisis for the Palestinian Authority (PA), with the PA announcing that it would pay its employees only 60 per cent of their June salaries. This follows the PA’s refusal, since February, to accept the monthly tax revenues collected on its behalf by Israel, as long as Israel deducts the amount it calculates that the PA pays to the families of “martyrs and prisoners”. In his most recent briefing to the Security Council, the UN Special Coordinator, Nickolay Mladenov, warned that “the fiscal crisis and related austerity measures are severely impacting the Palestinian economy with the outlook for the private sector remaining very bleak.” 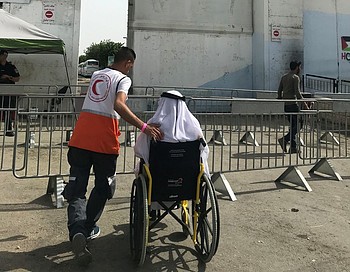 Most of Sur Bahir is located within the annexed East Jerusalem municipal area, but the community also has land in Area A, B and C, as designated under the Oslo Accords. The Barrier has also been constructed through Sur Bahir, in contravention of the 2004 Advisory Opinion of the International Court of Justice, which established that the sections of the Barrier which run inside the West Bank, including East Jerusalem, violate Israel’s obligations under international law.

The route of the Barrier in Sur Bahir leaves parts of Area A, B and C on the ‘Jerusalem’ side. In 2011, the Israeli authorities issued a military order which designates a buffer zone of 100-300 metres on either side of the Barrier in Sur Bahir, where construction is prohibited due to security concerns. The buffer zone includes more than 200 buildings, including nearly 100 built after the 2011 military order, in the context of heavy restrictions on the ability of Palestinians to obtain construction permit in East Jerusalem.

On 11 June 2019, the Israeli High Court dismissed a 2017 petition filed by Sur Bahir residents seeking to annul the military order, and/or that the demolition of their structures not be implemented. On 18 June, Israeli forces sent residents a “Notice of Intent to Demolish” which will expire on 18 July, and affects ten inhabited or under-construction buildings, comprising some 70 apartments. If executed, the demolitions will displace three households, comprising 17 people, including nine children, and otherwise affect an estimated 350 people. Demolitions, the threat thereof, and restrictive planning policies are among the key elements of the coercive environment present in many parts of the West Bank, including East Jerusalem, that is generating a risk of forcible transfer for many Palestinians.

The second Bulletin article concerns access to East Jerusalem during the Muslim month of Ramadan, which concluded on 4 June. While the majority of Palestinians from the remainder of the West Bank and the Gaza Strip require permits from the Israeli authorities to access East Jerusalem, these requirements are relaxed during Ramadan for Friday prayers. As was the case in previous years OCHA, with humanitarian partners, monitored access into the city, to identify protection risks and mitigation measures for vulnerable groups, as part of OCHA’s analysis of broader access trends.

This year, as part of the relaxation measures, the Israeli authorities allowed West Bank female ID holders of all ages, and males aged under 16 and above 40, to enter East Jerusalem without a permit on Fridays. This allowed some 320,000 West Bank ID holders to enter East Jerusalem for the four Friday prayers. Compared to previous years, this year recorded general improvements in access, partly due to the installation of speed gates at Qalandiya and Gilo checkpoints in early 2019 for people holding magnetic ID cards. However, no special Ramadan permits were issued this year for the residents of Gaza.

The final Bulletin article concerns improvements in the supply of electricity to the Gaza Strip. For the past decade, Gaza has suffered from a chronic electricity deficit which has had a severe impact on health, water and sanitation services and undermined already fragile living conditions. In October 2018, the Government of Qatar provided US$60 million in funding which has increased electricity supply to 14-15 hours in a 24-hour period and reduced expenditure on fuel by households and businesses. In May 2019, Qatar pledged $180 million in additional funding, which includes support for electricity services and which will allow the UN to facilitate provision of fuel for the Gaza Power Plant until the end of 2019.

In addition, several health facilities have been directly connected to the main power supply or provided with solar panels, reducing their reliance on emergency generators. However, the improved electricity supply still only meets less than half of Gaza’s power demands, leaving electricity cuts that continue to impede the functioning of health facilities and hospitals, jeopardizing essential services. This final item also highlights the efforts of local authorities and the Health Cluster partners to mitigate the impacts of ongoing cuts.