Numerous casualties during demonstrations near the perimeter fence in Gaza

A series of demonstrations in the Gaza Strip since 30 March, near the perimeter fence with Israel, have resulted in large numbers of casualties and have raised serious protection concerns.

The demonstrations, organized by Palestinian political factions and political and civil society movements, are part of the Great March of Return lasting up to 15 May, the 70th anniversary of what Palestinians refer to as the 1948 Nakba. The largest gatherings were recorded each Friday at tent camps set up 600-700 meters from the fence in different locations and attended by thousands of participants, including families with children, young people and seniors.

Each Friday, instances took place in which hundreds of demonstrators approached the fence in an attempt to damage it, burning tires, throwing stones and, to a lesser extent, Molotov cocktails towards Israeli forces deployed on the other side. On several occasions, demonstrators flew kites with flaming materials attached to them into Israeli territory, setting crops inside Israel on fire. 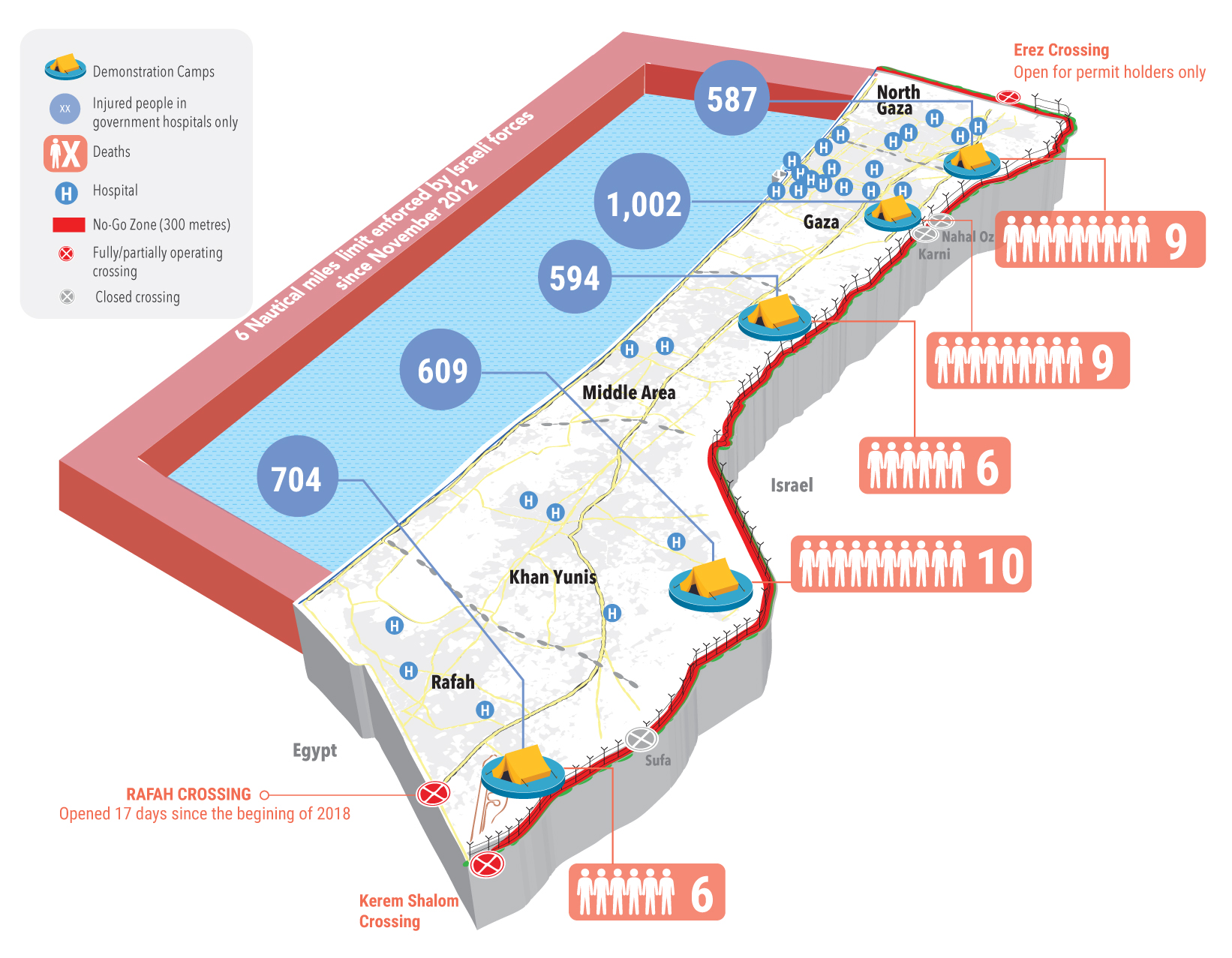 On two occasions, ahead of the expected demonstrations, the Israeli military dropped leaflets in the area of the tents warning Palestinians to stay away from the fence. Heavily armed Israeli forces stationed on the Israeli side of the fence behind defensive earth-mounds include one hundred snipers, according to statements by Israeli officials. These forces responded with firearms, including live ammunition, rubber bullets and tear gas canisters, some of them dropped from drones.

Between 30 March and 30 April, a total of 40 Palestinians, including five children, have been killed by the Israeli forces during the demonstrations. Another ten Palestinians, among them a child, were killed by Israeli forces during this period in other circumstances, including five shot and killed after breaching the fence and crossing into Israel, whose bodies have been withheld by Israel. The fatalities included a journalist wearing a vest marked Press, who was shot less than 100 meters from the fence.[1] Another 19 journalists were injured, 12 of them by live fire.[2]

During the same period, nearly 6,800 Palestinians have been injured during the demonstrations according to the Palestinian Ministry of Health (MoH) in Gaza, including over 1,900 injuries from live ammunition. By 16 April, some 16 cases of injuries leading to disability had been reported by the Health Cluster. At least 96 health staff had been reportedly injured, including five with live fire, and 16 ambulances damaged.

No Israeli casualties have been reported. The Israeli authorities have stated that many of the fatalities were members of Hamas and other armed groups, and have accused the MoH of inflating the number of those wounded by live ammunition.

In Gaza, as in the rest of the occupied Palestinian territory, international humanitarian law (IHL) and international human rights law (IHRL) apply concurrently. Policing activities during demonstrations or protests are regulated by the law enforcement paradigm derived from IHRL which restricts the use of lethal force to cases of extreme necessity only, as a last resort in response to an imminent threat of death or risk of serious injury. Medical personnel and medical units are to be respected and protected.[5]

So far, there is no evidence that the Palestinians killed during the demonstrations were posing such a threat, raising concerns of excessive use of force leading to arbitrary deprivation of life.[6] Under IHL, this may also constitute an act of wilful killing, a grave breach of the Fourth Geneva Convention and a war crime.[7]

On 30 April, the Israeli High Court of Justice heard petitions submitted by two groups of NGOs challenging Israel’s open-fire regulations in the context of the current demonstrations. In the hearing, the state representatives rejected the applicability of IHRL to its operations in the oPt, including in the Gaza Strip, and stated that Israel’s open fire regulations are in line with international law. The open fire regulations are not public and have not been disclosed. The case is still pending before the court.

Calls for independent and transparent investigations into the incidents in Gaza since 30 March were made by the UN Secretary-General, and echoed by the spokesperson of the UN High Commissioner for Human Rights and UN human rights experts. The IDF Chief of Staff has reportedly ordered an internal investigation into the incidents.

An additional concern is the denial or delay of travel permits for injured demonstrators to seek urgent specialized medical treatment in the West Bank or Israel. According to WHO, of the 27 patients injured in the demonstrations from 30 March to 30 April who have applied for Israeli permits to exit Gaza for health care, nine applications were approved (33 per cent), significantly lower than the acceptance rate for such permits overall in the first quarter of 2018 (60 per cent). This has increased the life risk and suffering of injured demonstrators, and resulted in the loss of limbs in some cases.  The Israeli authorities stated that they would not allow people who participated in the protests to exit Gaza for medical treatment in hospitals in the West Bank or Israel as a matter of principle.[8] Following a petition filed with the Israeli High Court of Justice (HCJ) by the NGOs Adalah and Al Mezan on behalf of two patients, the HCJ ruled on 15 April that the individuals met the criteria for medical referral and that no security grounds justified the denial of an exit permit. 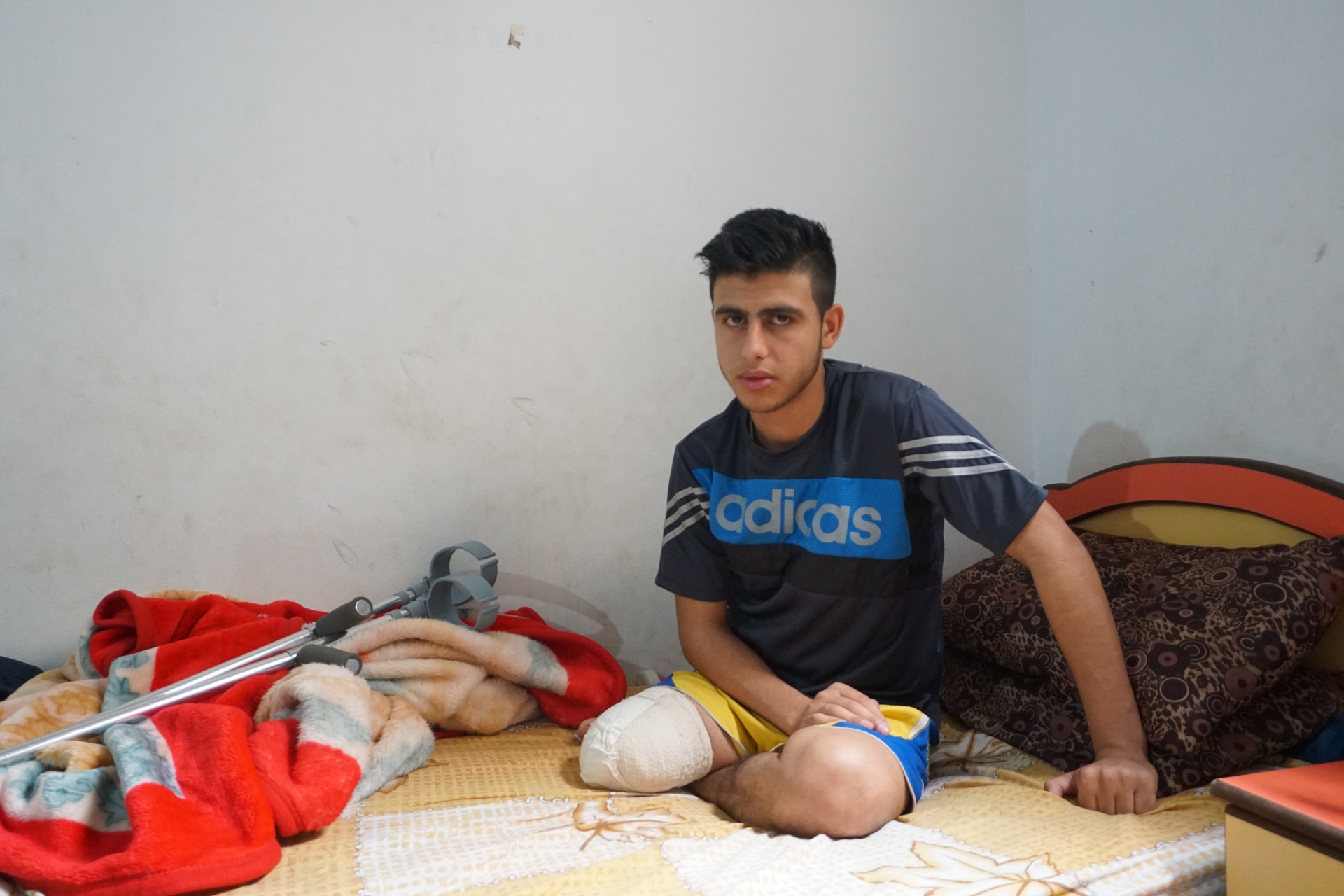 Mohammed Al Ajouri is a 16-year-old athlete who participated in the first of the Great March of Return demonstrations on 30 March in northern Gaza. “I wasn’t there to throw stones. I went there with my friends to participate peacefully. I was standing near the tents but I moved some steps ahead to help some of the injured people who were overcome by the tear gas fired by Israeli forces. As I was coming back, I was hit by a kind of explosive bullet below my right knee.

“I was transferred first to Al Awda hospital, but due to the serious condition of my injury I was then transferred to Ash Shifa hospital in Gaza. I was in the operation room for six hours and was then transferred to the intensive care unit (ICU). I was supposed to stay in the ICU but there wasn’t enough space due to the high number of injuries, so I stayed in the general ward for a week, during which I made two referral requests to the West Bank and Egypt but received no answer from either the Israeli or Egyptian authorities. Three days later, on 9 April, the doctors decided to amputate my leg as there was no other way to save my life.

“I used to play soccer, run, jump and swim. I was preparing to travel abroad to participate in a marathon competition as I play for a number of clubs and for the national team. Now, I can’t play any of the sports I used to due to my new circumstances, but this will never stop me. I will continue my life as before and adapt and I will never stop playing sports.” 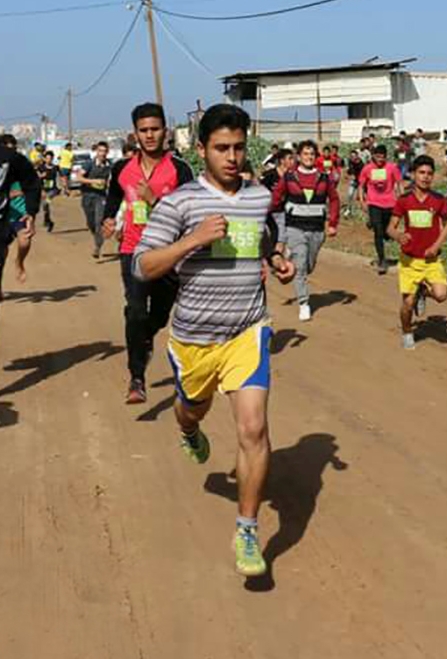 * This case study was prepared by OCHA.

[3] The applicability of IHRL in a situation of armed conflict or occupation concurrently with IHL has been widely affirmed. The International Court of Justice first addressed that issue in 1996 and then reiterated the concurrent application of both bodies of law in its advisory opinion on the wall, including in respect of the oPt. A situation of armed conflict or occupation does not release a State from its human rights obligations. (See, SG report, A/HRC/34/38, para. 9).

[8] Response submitted to the Israeli High Court of Justice on 11 April 2018: HCJ 2777/18, Yousuf Karnaz and others vs IDF Commander and others.