Only 24 per cent of the US$25 million appeal for urgent humanitarian interventions in the Gaza Strip, launched in early July, have been secured so far; ongoing electricity blackouts for 18-20 hours a day

Since the 2014 conflict, UNMAS destroyed 29 metric tonnes of explosive material from 149 unexploded aerial bombs, bringing clearance operations to a close.

Settler violence increases by 88% during first half of 2017, compared to the previous year, despite preventive measures by the Israeli authorities.

In his briefing to the UN Security Council on 25 July, the Special Coordinator for the Middle East Peace Process, Nikolay Mladenov, described the situation in the Gaza Strip as follows: “Two million people have been taken hostage in the political standoff between Fatah and Hamas. The humanitarian impact of the punishing measures taken against Gaza is appalling. In some parts of Gaza people have experienced electricity cuts of 36 hours. No electricity means no drinking water. Hospitals are struggling to survive. An environmental crisis is in the making.”

In July, humanitarian agencies in the occupied Palestinian territory (oPt) appealed to the international community to provide US$25 million in humanitarian funding for urgent lifesaving interventions to stabilize the situation in the Gaza Strip.

In April 2017, the United Nations Mine Action Service (UNMAS) cleared the last known accessible aerial bomb in Gaza, marking an important milestone in addressing the legacy of unexploded ordnance contamination in Gaza. Since the 2014 conflict, UNMAS has cleared and destroyed 29 metric tonnes of explosive material from 149 unexploded aerial bombs. This critical work protects both Gaza communities directly impacted by the presence of unexploded ordnance and the wider community through the removal and destruction of explosive materials which could be harvested and reused for improvised explosive devices.

Increase in settler violence during the first half of 2017

Settler violence and poor law enforcement by the Israeli authorities have been longstanding concerns. They have undermined the physical security and agricultural livelihoods of tens of thousands of Palestinians in some areas of the West Bank and generated the need for assistance and protection by humanitarian actors, especially for vulnerable groups such as children and women. Humanitarian interventions coordinated by the Protection Cluster include the deployment of a protective presence in high-risk areas; psychosocial support to victims; the installation of protective infrastructure (see case study); the documentation of cases and advocacy; and legal counselling.

Some 348,000 Palestinians permitted into East Jerusalem for Ramadan Prayers 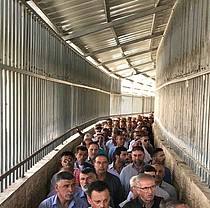 During the month of Ramadan (27 May-26 June), Israeli authorities reported that around 348,000 Palestinians holding West Bank ID cards entered East Jerusalem for Friday prayers and Laylat al Qadr (the night of destiny) at Al Aqsa Mosque in relaxed measures to mark the month of Ramadan. This represents an increase of 15 per cent over the equivalent figures in 2016. Additionally, 453 Palestinians from the Gaza Strip were allowed access to East Jerusalem for these events. While arrangements at checkpoints to facilitate travel to Al Aqsa Mosque, were put in place, vulnerable groups including elderly, children, and people with disabilities faced several challenges. During the month, one major Palestinian attack resulted in the death of an Israeli police officer and led to the partial suspension of the relaxation measures.