In Gaza, severe limb injuries caused by live ammunition have created a substantial burden on the already overstrained health system. Between 30 March 2018 and 31 July 2019, more than 7,500 Palestinians have been injured by live ammunition by Israeli forces during the “Great March of Return” (GMR) demonstrations along the fence between Gaza and Israel.[1] According to the oPt Health Cluster, 87 per cent of these are limb injuries, with injuries to the abdomen and pelvis accounting for approximately five per cent.

Of the over 6,500 limb injuries, 148 have directly resulted in amputations (122 lower limb and 26 upper limb). Out of these, at least 108 cases were the result of secondary amputations, which were performed due to subsequent bone infections. The latter usually occur when a limb injury is compounded by more extensive damage to the skin, tissue, nerves and blood vessels. It is estimated that that between 25 and 40 per cent of patients with such complications go on to develop some form of bone infection over a 12-month period following the injury. In other cases, the injury leads to an open fracture that is either non-healing or leaves bone gaps, which also require specialized orthopaedic plastic-reconstructive surgery.

The World Health Organization (WHO) estimates that at least 1,200 of those who sustained limb injuries will require specialized limb reconstruction treatment. Such treatment usually extends from six months to three years, depending on the severity of the case, and involves two to eight surgeries and 12 to 30 physiotherapy sessions. The cost of each individual treatment may reach as much as US$ 40,000.

WHO has warned that unless the existing capacities for microbiology testing, osteomyelitis treatment and limb reconstruction are significantly scaled up, the number of secondary amputations is likely to increase. The Health Cluster has appealed for $28.2 million to support the emergency healthcare needs of Gaza during 2019, of which $ 16.2 have been provided, leaving a funding gap of $12 million.

The large number of live ammunition injuries among unarmed demonstrators has also raised concern about excessive use of force by the Israeli military. Under international human rights law, the use of lethal force in law enforcement activities is allowed only as a last resort and only in response to imminent threat to life, or serious injury.

Addressing the need for limb reconstruction

Years of blockade and other movement restrictions on people and materials, including medical resources, the deepening intra-Palestinian political divide, and a chronic energy crisis, have led to a serious deterioration in the availability and quality of health services in the Gaza Strip. According to WHO, in July, 254 items (or 49 per cent) of essential medications and 225 items (or 26 per cent) of medical disposables were reported to be at less than one-month supply at Gaza’s Central Drugs Store.

Medical Aid for Palestinians (MAP) UK is currently the only organization dealing with late and complex limb reconstruction injuries in Gaza, in coordination with MoH and the Health Cluster. MAP established the first limb reconstruction unit in the oPt, comprising two consultant orthopaedic surgeons, two nurses and two physiotherapists, in addition to doctors and other specialists working with the local teams. The unit supports existing services in Gaza hospitals by bringing in medical missions to conduct on the job training; assistance with complex cases; the provision of equipment; regular Skype links between Gaza and London; and coordination efforts with stakeholders.

Médecins Sans Frontières (MSF) is another international NGO dealing with people who have developed bone infections after sustaining a limb injury from live ammunition. The organization has been recently working with the MoH in Gaza to upgrade a laboratory, so that it can analyse bone samples, a crucial part of diagnosing correctly bone infections and knowing which antibiotics will work. Previously, each sample had to be sent to labs in Israel for testing.[2]

The Ministry of Health (MoH) in Gaza, with support from WHO, is developing a limb reconstruction database, which will allow for real-time tracking and appropriate referral for limb reconstruction patients. The database will allow the MoH and its partners to upload and access patient data, as well as identifying and referring patients in need of limb reconstruction screening, pre and post-surgery consultations, including physiotherapy plans.

The system mechanism will facilitate the tracking of patients and ensure prioritization of the most severe cases, while storing clinical information throughout the treatment pathways. The database will enable the assessment of outcomes and impacts of limb reconstruction interventions, such as the one implemented by MAP UK. Thus far, some 900 potential candidates for complex limb reconstruction procedures have been screened.

Personal story: “I really appreciate that I was chosen to be evaluated by MAP”

Mohammed Abu Jazar is a 41-year-old father of six children was injured on 14 May, 2018, the most devastating GMR demonstration to date, with 59 killed and over 2,600 injured.

“It was the third time for me to take part in a demonstration. Before that I only sat in the tents, but this time I was looking out for my children who had arrived there before me. Within five minutes of arriving, when I was at some 150 meters away from the fence, I was shot in my right leg. 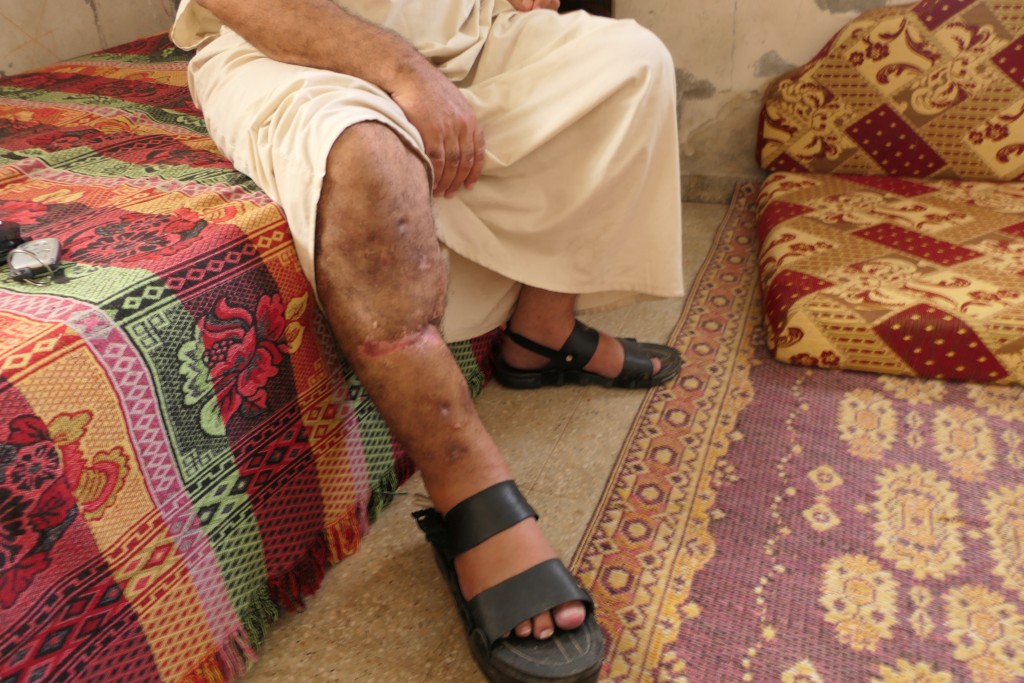 I had severe pain following my injury. The bullet caused an injury that affected the veins, arteries and bone. While waiting to be treated, the main artery in my leg exploded and I was admitted to the operations room the European hospital in Khan Younis.

I underwent a number of surgeries, including two for the external fixator, which made my injury worse. Later I got a more sophisticated fixator used for complex fractures. [3] I was very lucky to receive this, although during all this time, I couldn’t walk. I was totally dependent on a wheel chair.”

Mohammed doesn’t work and receives only 1,300 NIS from the Ministry of Social Development every three months. “We used to buy all the medications out of our own pocket, and I had to borrow money from others or go into debt. Seven months following my injury, the high committee of the GMR started paying 600 NIS every 30-40 days and do medical checks to evaluate the injury.

“Recently the doctors said that I’m doing well and that the TSF device could be removed. Since then, I have had teams of physiotherapists visiting me every month and I have been attending the Limb Reconstruction outpatient clinic run by MAP. I really appreciate that I was chosen to be evaluated by the mission and really want to continue receiving care from them.”

Mohammed is now able to stand and walk with his children without the assistance of a wheel chair or crutches, and is currently looking for a job that is suitable for his condition.

[1] This figure includes only those people that have been hospitalized following their injury; some 600 additional demonstrators injured by live ammunition have been only treated at the medical points deployed in the field. Additionally, 206 demonstrators, including 44 children, were killed in this context and more than 26,000 others injured by means other than live ammunition. For further details and breakdowns see OCHA’s Casualties Online Database and OCHA’s Snapshot.

[2] For further details about this intervention see: MSF, Treating resistant infections in Gaza under the blockade, September 2019.

[3] The Taylor Spatial Frame is an external fixator used for complex fractures in both adults and children. MAP is the only organization that helps to procure this device in Gaza.