Published as part of
The Monthly Humanitarian Bulletin | February 2019

The Temporary International Presence in Hebron (TIPH) has left the H2 area of Hebron city following the Israeli government’s decision not to renew its mandate beyond 31 January 2019.[1] Combined with intensified harassment and restrictions against residents and the remaining protective presence actors in the area, this increases the protection risks faced by the population, particularly schoolchildren. In his remarks to the Committee on the Exercise of the Inalienable Rights of the Palestinian People, UN Secretary General António Guterres expressed regret at Israel’s decision not to renew TIPH’s mandate. He expressed the hope that an agreement can be reached to “preserve this long-standing and valuable arrangement”. 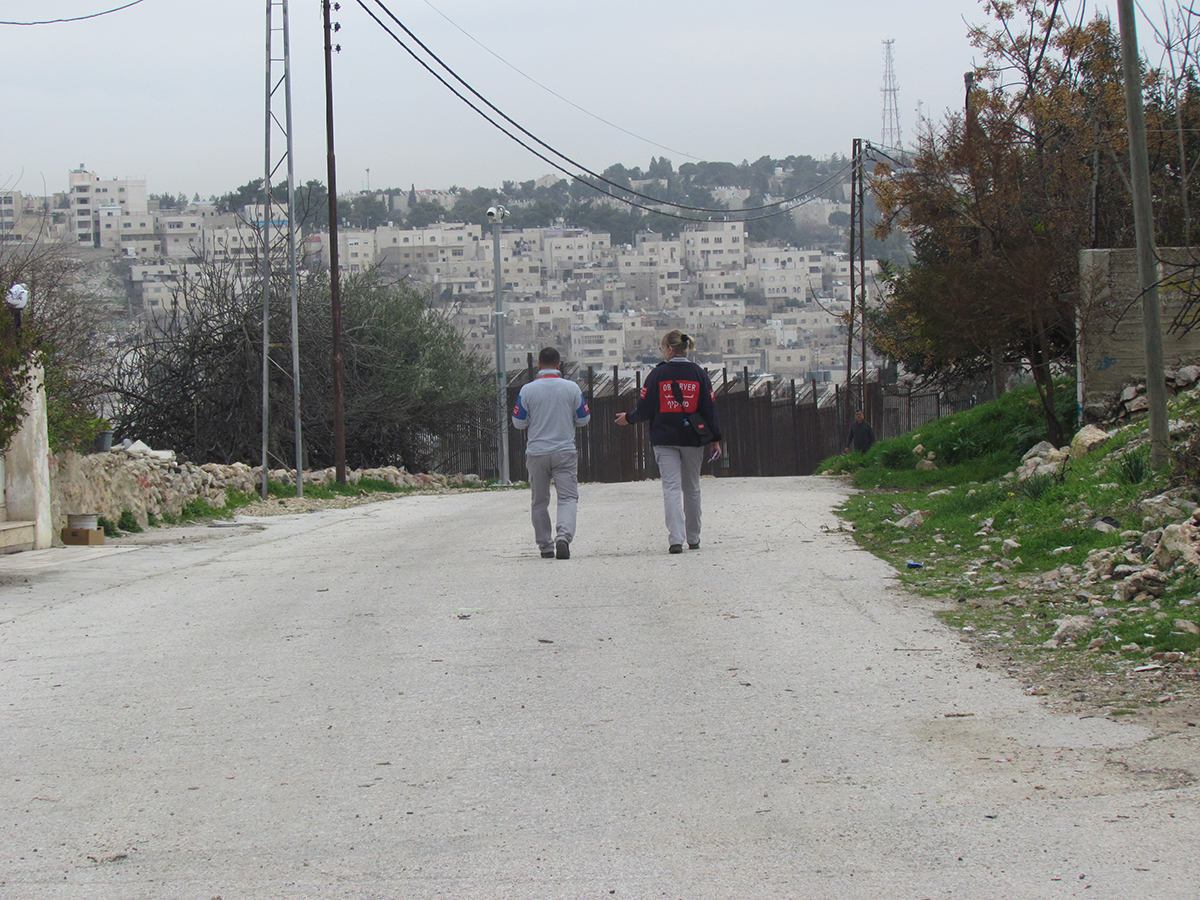 The temporary international presence in Hebron began in 1994 pursuant to UN Security Council Resolution 904 “to guarantee the safety and protection” of Palestinians following the massacre of 29 Palestinians in Al Ibrahimi Mosque by an Israeli settler.[2] In 1997,  TIPH redeployed in accordance with the Hebron protocol to assist in “monitoring and reporting efforts to maintain normal life in the city, thus creating a sense of security among Palestinians in Hebron”.[3]

TIPH reports were shared with the Palestinian and Israeli authorities, and with the five contributing countries.[4] According to the media, a leaked TIPH report covering 20 years of information and based on over 40,000 recorded incidents,  found that “ the city is more divided than ever, due to the actions of the Israeli government and Israeli settlers.” It also found that Israel is in “severe and regular breach” of the right to non-discrimination and of the obligation to protect the population living under occupation from deportation, while “radical Israeli settlers” make life in the Israeli-controlled area difficult for its Palestinian residents.[5]

The Israeli authorities accused the observers of interfering with Israeli forces; creating friction with settlers; cooperating with radical organizations; and promoting the de-legitimization of Israel.[6] The accusations came alongside two incidents by TIPH members in late 2018: the slapping of an Israeli child, which was followed by a letter of apology from the head of TIPH describing the action taken against the TIPH member, and the puncturing of tyres on a vehicle belonging to an Israeli settler.

The departure of over 60 TIPH internationals, increases the risk of increased tension in H2 and exacerbates the protection risks, including those resulted from human rights violations, facing Palestinian residents, particularly schoolchildren. TIPH was unique in that it was the only organization in the Israeli-controlled part of Hebron city (H2) authorized to access any part of H2 on foot and with a vehicle, at any time, to document incidents and provide a protective presence.[7]

Since the announcement of the termination of TIPH’s mandate, the Protection Cluster has observed an increase in the number of incidents of settler harassment and intimidation (excluding those resulting in casualties or property damage), including intrusive close-up filming of humanitarian actors and verbal abuse, with a monthly average of four such incidents recorded in 2019, compared to two in 2018.

Following an incident that threatened the safety of two of their Ecumenical Accompaniers EAPPI temporarily suspended their operations in the area. Protective presence actors have also observed increased restrictions on their operations in H2 by Israeli forces, including access restrictions, particularly in and around Shuhada Street, a focus for settler violence.

This comes in the wider context of continued pressure on human rights defenders marked by arrests, detention, harassment and legislation aimed at constricting humanitarian and civil space. These measures effectively curtail the ability to ensure the required protection.[8]

Residents attempt to fill the void left by TIPH’s departure

The departure of TIPH and subsequent rise in harassment and access restrictions facing humanitarian actors has heightened protection concerns and anxiety among residents. Residents have adopted community measures with the formation of a committee to organize initiatives for parents to escort groups of children to and from school, as well as instructing children on means to protect themselves.

Around a dozen Palestinian volunteers wearing blue vests began to accompany children from the Israeli-manned Checkpoint 56 on Shuhada Street, but were subsequently prohibited by Israeli military order from carrying out such activities. Calls for international activists to join the initiatives have also been publicised.  These initiatives have raised concerns among residents regarding the potentially provocative impact on settlers.

In his February address to the UN Security Council, the UN Special Coordinator for the Middle East Peace Process, Nickolay Mladenov, confirmed that the United Nations “continues to engage with relevant Member States and the parties on the ground to ensure the protection, safety and wellbeing of civilians in Hebron, and the rest of the occupied Palestinian territory.”[9]

According to Noora Nassar, the head of Qurtoba School, the departure of TIPH has left both children and teachers “exposed, unprotected and living in constant fear”. “Our main goal now is to ensure that the educational process continues and our children are able to reach school and return home safely…We are training children on how to protect each other.”

Background on the H2 area of Hebron

Israel exercises full administrative and security control over the 20 per cent of Hebron city known as H2, which is home to some 33,000 Palestinians and a few hundred Israeli settlers. This area has witnessed multiple cycles of violence between Israeli settlers, Israeli forces and Palestinian residents in the context of continuous settlement activities.

The centre of H2 is physically separated from the rest of the city through 121 access and movement obstacles, including 21 permanently-staffed checkpoints. Around, 7,000 Palestinians in these areas must cross a checkpoint to reach their homes on foot.

Protection and human rights concerns primarily stem from harassment, intimidation and violence of the Palestinian residents, including children, by Israeli settlers. Israeli forces have repeatedly failed to protect the population and have participated in acts of harassments. According to a household survey carried out by UNOCHA in August 2018 in the H2 area of Hebron, 85 per cent of households surveyed identified harassment by Israeli soldiers and settlers as key concerns affecting access by children to education. Eighty-eight per cent of school children residing in this area (some 2,200 children) must cross a checkpoint to reach school. Around 90 per cent of households with schoolchildren reported at least one incident of delay, harassment, physical search or detention on their way to school in the first half of 2018.

Israeli policies and settler violence linked to settlements and their expansion have generated a coercive environment[10]  that undermines the living conditions of Palestinians, including their security, sources of livelihoods, access to services, and family and social life, forcing thousands of residents to leave over the last two decades.[11]

“I have two children with hearing impairments. The other day, my son was almost shot at the checkpoint because he didn’t hear the Israeli soldier telling him to go through the metal detector again. He was lucky that people at the checkpoint intervened on his behalf. He could have been shot on the spot . Now, I’m constantly worried… Previously, internationals would escort them to the checkpoint and back, and that gave me peace of mind.”

[1] The renewal of the mission was contingent on the approval of both the government of Israel and the Palestinian Authority every six months.

[4] The contributing countries, Norway, Sweden, Italy, Switzerland and Turkey, fund and provide observers for the mission in Hebron

[6] Quotation from Israeli Minister of Public Security and Strategic Affairs on 17 January 2019, according to the Hebron Fund Organization

[7] Protective presence refers to the physical presence and monitoring of incidents by internationals as a form of deterrence against acts of violence.

[9] Security Council briefing on the situation in the Middle East, including the Palestinian question, 20 February 2019.