Published as part of
The Monthly Humanitarian Bulletin | January 2019

In a positive development, as of 2 January 2019, for the first time since 2000, Israel has partially expanded the fishing limits up to 12 nautical miles (NM) in the middle area off the Gaza coast. However, access along the northern and southern areas continue to be restricted by Israel, citing security concerns, to six nautical miles (NM), well below the 20 NM agreed under the Oslo Accords.[1] In addition to access restrictions, Palestinian fishers remain subject to significant protection concerns, with the number of fisher injuries and shooting incidents rising significantly in 2018.[2] 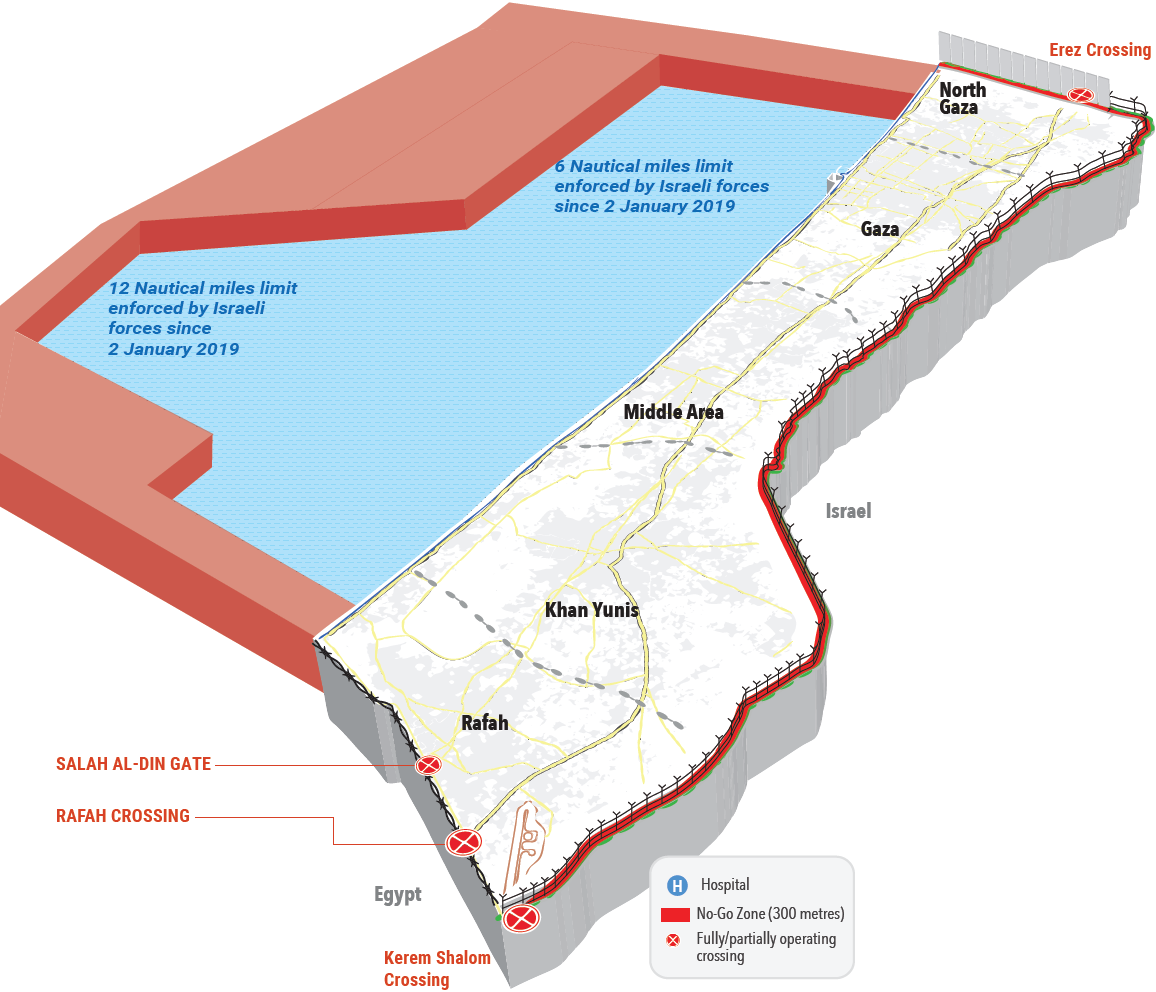 Fish is a major source of protein, micronutrients and essential fatty acids, and a regular supply at affordable market prices is essential for providing nutritional diversity to Gazan diets. There is a direct correlation between distance from the coast and the quantity and value of the catch, the further out to sea fishers can go, the deeper the water and the higher the value of the fish caught: From eight to 12 NM, where the seafloor can descend to 100 metres, there is a higher availability of bottom fish and more profitable sardines. At 12 NM and beyond, the sea floor is sandy and the depth increases gradually to about 700 metres: creating the most opportune habitat for catching a variety of higher value and quality fish such as tuna and mackerel.[3]

In the period between the 1994 Oslo agreement until 2000, the fishing limit stood at 12 NM. The distance since then has fluctuated from a high of nine NM to as low as three NM, with no fishing permitted at all during escalations of hostilities. Following the August 2014 ceasefire, Israel set the fishing limit at six NM, with an extension to nine NM along the southern coast (between Deir Al Balah and Rafah) twice a year during the sardine season, from April to June and from September to November.[4] These seasonal extensions have significantly increased the total catch, which reached their highest levels since 1999. However, the catch has remained mainly limited to low-value sardines.

These access restrictions, combined with other factors, including Israeli restrictions on imports and exports, and the inconsistent availability of electricity, have undermined the development of the fisheries sector in Gaza. This has affected the income and livelihood of fishers, greatly reducing the supply of fish available for local consumption.[5] Currently only 2,000 out of 3,617 fishers registered by the Ministry of Agriculture in Gaza are considered ‘regularly active’.[6] Provided that the recently introduced expansion continues, and is respected by the Israeli navy, there is hope that a tangible improvement in the variety and profitability of the fish catch can be achieved, potentially reviving the fishing industry as a sustainable source of income. Despite the limited size of the fishing sector, given the extremely high levels of unemployment (54.9 per cent during the third quarter of 2018) and food insecurity (68 per cent in 2018) in the Gaza Strip, the revival of this sector may have a significant impact.

The recent expansion of the fishing limits has taken place amidst ongoing protection concerns. These relate to the practice of the Israeli navy, and to a lesser extent the Egyptian navy, of enforcing fishing limits by the opening of live fire at fishing boats, resulting in casualties and damage; forcing fishers to jump into the sea and swim towards Israeli vessels, where they are detained; and confiscation of boats and fishing equipment.

Two Palestinian fishers were killed by Israeli naval forces in 2017, as well as in 2018. Two Palestinian fishers were also killed by Egyptian naval forces in 2018. The number of Palestinian fisher injuries witnessed a 43 per cent increase, from 14 to 20, in the same years.[7] The number of shooting incidents increased by 41 per cent, 231 to 325, and the number of fishers detained increased by 141 per cent, 39 to 94, over the same period. According to fishers’ testimonies, many of these incidents have taken place within the fishing limits permitted by the Israeli authorities, and without prior warning, potentially discouraging fishers from fully exploiting the permissible fishing area.

The Food and Agriculture Organization of the United Nations (FAO) is currently supporting the fishing sector by establishing offshore cage culture farms, with a capacity of producing 150 tons of fish per year. FAO is also providing the necessary training and skills to the sector so that members can manage the projects as a social business. The project aims to generate additional income sources for the Gazan fishery sector and improve the availability of diverse and high quality fish for local consumption. It is forecasted to produce revenues within two years of its establishments for the benefit of 2,000 Gazan fishers. 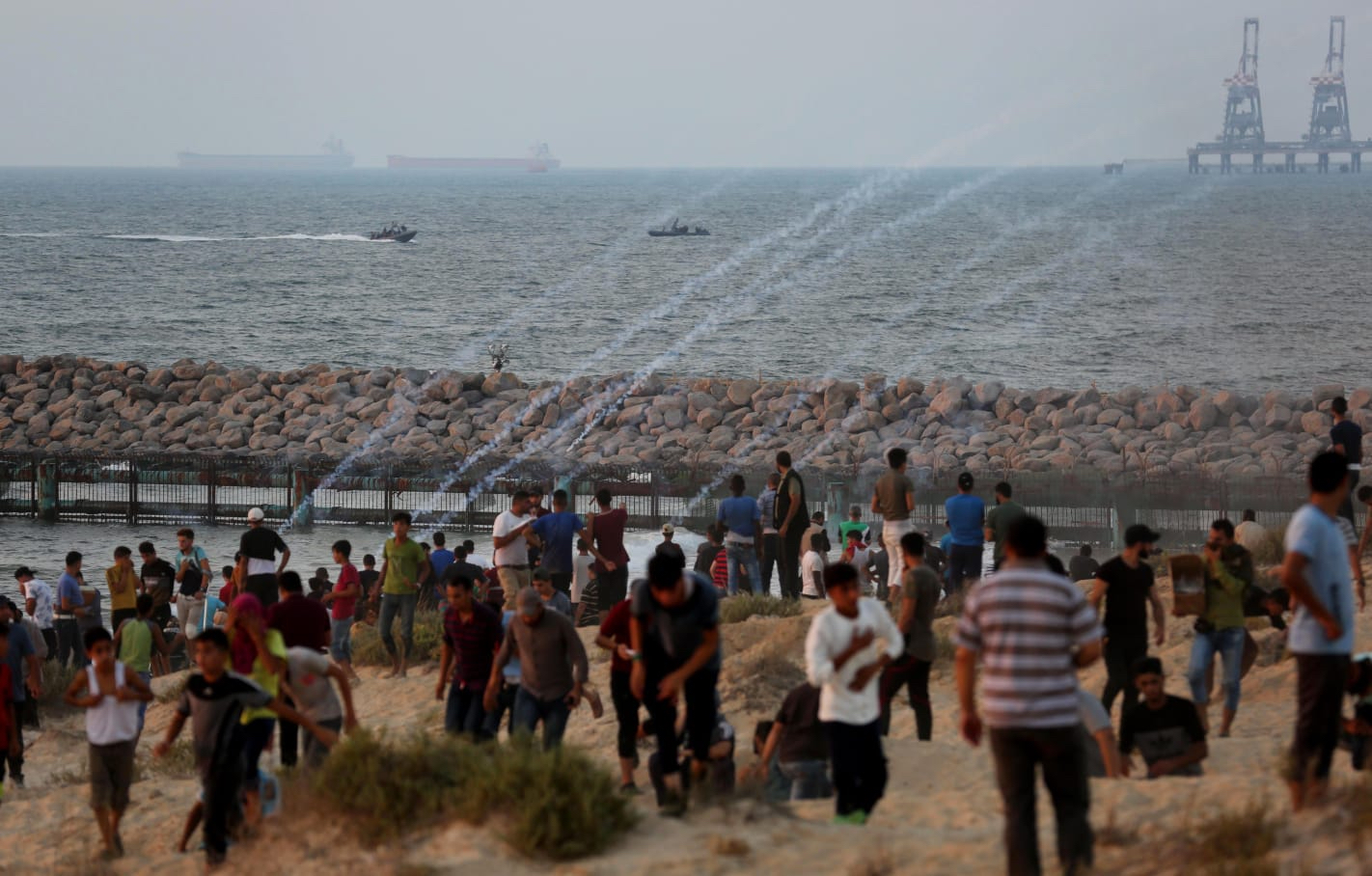 Demonstrations at sea in the context of the ‘Great March of Return’, with the expressed aim of breaking the Israeli-imposed blockade at sea, resumed on 28 January 2019.  They had been suspended for some four weeks due to the weather and because of challenges in accessing the area where the demonstrations are organized. The demonstrations have been organized on a weekly basis on Mondays near Beit Lahiya, close to the Israeli border, and also included occasional launches of flotillas towards the fishing limits.

The first flotilla, referred to by the organizers as the “Flotilla of Freedom”, was launched on 29 March 2018. According to the organizers, the first two flotillas included medical patients and students and set off for Turkey. All the flotillas were intercepted[8] and turned back by Israeli naval forces.

The demonstrations (including the flotillas) were met with Israeli forces firing tear gas canisters, as well as rubber and live bullets, leading to the killing of three Palestinian men, and the injury of 959 others, including 241 children, between 29 March 2018 and 31 January 2019.

Fishing has been Falah Abu Riyala’s occupation for the past 20 years. Like many others, Falah passed down his trade to his eldest son, nineteen-year-old Mohammad, and together they operated a boat to support their family of eleven members.

“On that day, we were sailing at 9 NM in Wadi Gaza area, within the Israeli permitted fishing limits, as we had done the entire past week, when all of a sudden the Israeli navy started shooting at us! We turned back but they continued to chase after us. While continuing to shoot they called on us to stop the boat. We were within 2 NM from the coast when the boat stopped after they shot the engine. At that point we were both shot.”

Mohammad received a bullet in his leg while his cousin was shot with a rubber bullet. The Israeli navy detained both of them, confiscated the boat and transported the two injured fishers to an Israeli hospital. The following day they were transferred to Shifa hospital in Gaza, through the Erez crossing, along with a medical report by the Israeli hospital advising against the immediate removal of the bullet shrapnel in Mohammad’s leg in order to avoid causing extensive damage.

Mohammed had nine pieces of shrapnel in his leg, and was not able to walk for a month, let alone go fishing.

“My son is injured and can’t leave the house and I’m now unemployed after my boat was confiscated,” Falah explained.

Falah’s family was getting by from the income generated through their fishing activities, as well as the food assistance they were receiving from UNRWA as registered Palestine Refugees. Following the incident, Falah has incurred many debts that he is unable to repay, while he continues to wait for his boat to be released.

“I wish we were compensated for the boat or we could have our boat back. This boat used to be the only source of livelihood for four families, including my uncle and his sons and my grandfather who are all now unemployed,” Mohammad explained.

[1] Under the 1995 Interim Agreement between Israel and the Palestine Liberation Organization, Israel agreed to extend fishing activities to 20 nautical miles (NM), Annex I. However, 12 NM is the furthest that Israel, citing security concerns, have permitted Gaza fishers to access. In 2002, as part of the Bertini Commitments, Israel announced expanding the fishing zone to 12 NM but this was not implemented.

[5] Fishing is also affected by the restriction on the import of materials that are required to maintain fishing boats and nets, but are classified as ‘dual use items’, i.e. materials that could also have a military use. This represents a major constraint for the economic viability of the sector. Also important is the limited and irregular availability of electricity, which is indispensable for water desalination, ice production and refrigeration, needed to preserve the fish.

[8] The flotillas launched on 29 April 2018 and 10 July 2018 were seized, and those on board arrested. The majority were later released through the Erez crossing.