Since early 2018, citing security concerns, the Israeli authorities, and to a lesser extent Hamas, have imposed various measures which further tightened restrictions on the movement of humanitarian staff in and out of Gaza. Combined, these procedures have increased uncertainty, delays and logistic challenges. The UN continues to conduct negotiations with all relevant actors in Israel and Gaza to alleviate these restrictions.

The requirement to obtain Israeli-issued permits is a long-term challenge for the Gaza-based national staff of both international NGOs (INGO) and UN agencies. Since early 2018, there has been a continued increase in the number of such staff prohibited from re-applying for permits for a period of one year: this is a condition imposed on national staff following rejection of their initial permit application to access East Jerusalem and the rest of the West Bank, citing security reasons. Approximately 40 UN national staff received such a ban in 2017, rising to 140 UN personnel and 73 INGO staff banned by the end of 2018. As of June 2019, 150 UN personnel, and 111 INGO personnel were prohibited from applying for permits for one-year. As a result, approximately, half of Gaza-based UN national personnel, excluding UNRWA, are effectively prevented from implementing any mission outside of Gaza for a year. Although some UNRWA staff have been also banned, the majority of its approximately 11,000 national employees in Gaza are education and health personnel, who are not required to leave the territory on a regular basis.

The Israeli authorities require that permit applications for national staff to exit Gaza to travel to Israel and the West Bank are submitted 55 working days in advance of the date of travel, compared to 14 days in 2017. The official processing time for applications for a one-day permit to travel to Jordan, via Israel, is 70 working days. Although some national staff prohibited from travelling to the West Bank can still apply for permission to travel to Jordan, others are reportedly denied this option on security reasons, or because their reasons for travelling abroad do not meet the restrictive criteria that the Israeli authorities have imposed. 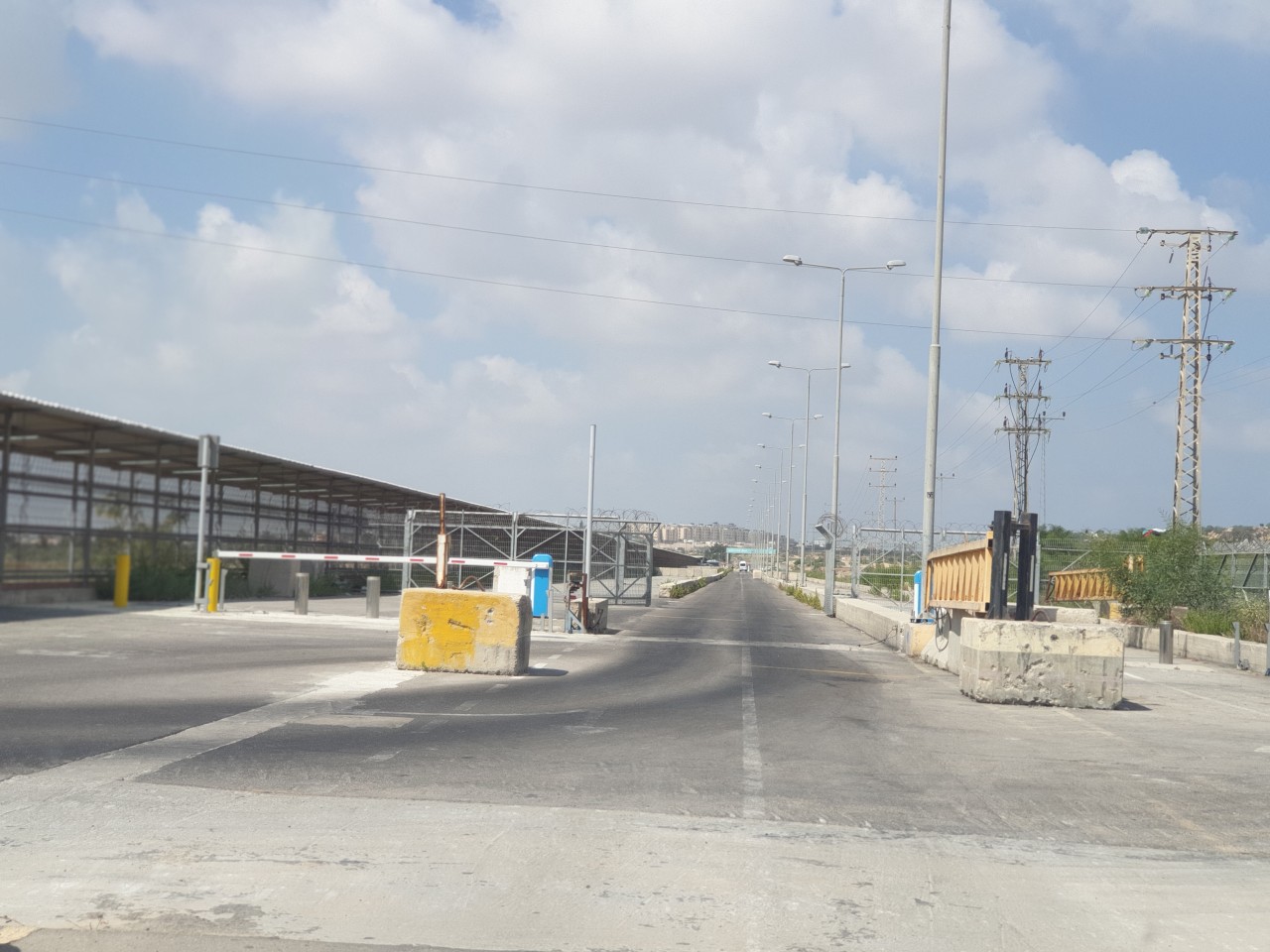 The extended processing times since 2017, together with the increase in national staff prohibited from reapplying for one year, have resulted in planning and logistical challenges. These include senior national staff being unable to attend donor meetings in East Jerusalem or the rest of the West Bank, thereby undermining critical fundraising efforts. Senior personnel who manage programmes in both Gaza and the West Bank are unable to monitor West Bank programmes to ensure consistency in quality. Gaza-based personnel are unable to take part in training in the West Bank, impacting the organizations’ ability to build capacity, including of staff providing direct health support in Gaza; the restrictions have also undermined efforts aimed at ensuring certain UN standards, as requested by donors and by the Israeli authorities. A long-term imposition of these measures risks a deterioration the quality of services provided by humanitarian agencies.

The enhanced security measures introduced at the end of March 2018 by the Israeli authorities at the vehicle terminal of Erez crossing continue. These include searches of UN and diplomatic vehicles by opening all the doors for sniffer dog inspections, and the removal, scanning and search of UN property, which are measures incompatible with the 1946 Convention on the Privileges and Immunities of the United Nations, to which Israel is a party without reservation. The Israeli authorities have agreed to exempt UN diplomatic pouches and some other UN property, including safety and vehicle equipment, from these search procedures, but vehicle searches and other violations continue. As a reason for these measures, the Israeli authorities have cited security concerns, including an increase in efforts to smuggle prohibited items, including weapons and dual-use equipment; in March 2018, a driver working for the French Consulate was detained at Erez and subsequently prosecuted on charges of an attempt to smuggle weapons under diplomatic cover.

Since December 2018, Israeli authorities have also limited those personnel who are eligible to drive vehicles through Erez to holders of valid cards issued by the Ministry of Foreign Affairs. They have also restricted the diplomatic personnel eligible able to pass through the vehicular crossing to those with diplomatic passports, excluding personnel with national passports and diplomatic visas.

Restrictions on items national staff are allowed to bring from Gaza

Since August 2017, all Palestinian residents of Gaza, including UN and INGO national staff, have had additional restrictions imposed on the items that they are allowed to take with them through the Erez pedestrian terminal. These include a ban on reinforced luggage (luggage with wheels or a frame), toiletries, laptops and other electronic devices; while mobile phones are allowed, the chargers for such phones are also banned. The restrictions on laptops and electronic devices create particular challenges for senior staff engaged in finance, IT and programme monitoring activities in Gaza, necessitating the provision of alternative equipment at their destination.

Measures imposed by Hamas in Gaza

In the past year, Hamas in Gaza has re-enforced its presence near Erez, originally justified as a temporary security measure. In March 2018, Hamas reinstated the procedures and restrictions which had been suspended following the Hamas-Fatah reconciliation agreement, signed in Cairo in November 2017. Hamas currently requires national staff from international organizations to register upon entry and exit to Gaza; imposes restrictions on the use of INGO vehicles; and occasionally delays staff for questioning, especially those travelling abroad or working for INGOs. Hamas also blocked access to Erez for six days in November 2018, following a security incident. Humanitarian agencies have also been occasionally prevented by Hamas from accessing certain areas inside Gaza near the perimeter fence.

The case of Save the Children

Save the Children is one of the international NGOs affected by increased restrictions on access into and out of Gaza. The organization’s emergency response is currently reaching 123,500 people, including 90,510 children. This requires staff, including management, to access operations in all parts of the oPt for training and learning; to provide adequate oversight; to monitor and evaluate; and to ensure accountability towards beneficiaries.  Currently, over half of Save the Children’s staff in Gaza have received year-long security bans, including staff members who have been previously granted permits. The participation of Gaza staff in a meeting held in Jordan in April 2019, was prevented by the Israeli authorities, despite coordination being initially assured; Save the Children subsequently had to pay cancellation fees. Save the Children’s Gaza staff have been unable to participate in annual country team retreats for the past three years. The increased restrictions have had psychological, financial and management consequences and have undermined the organization’s ability to effectively  provide assistance to children. 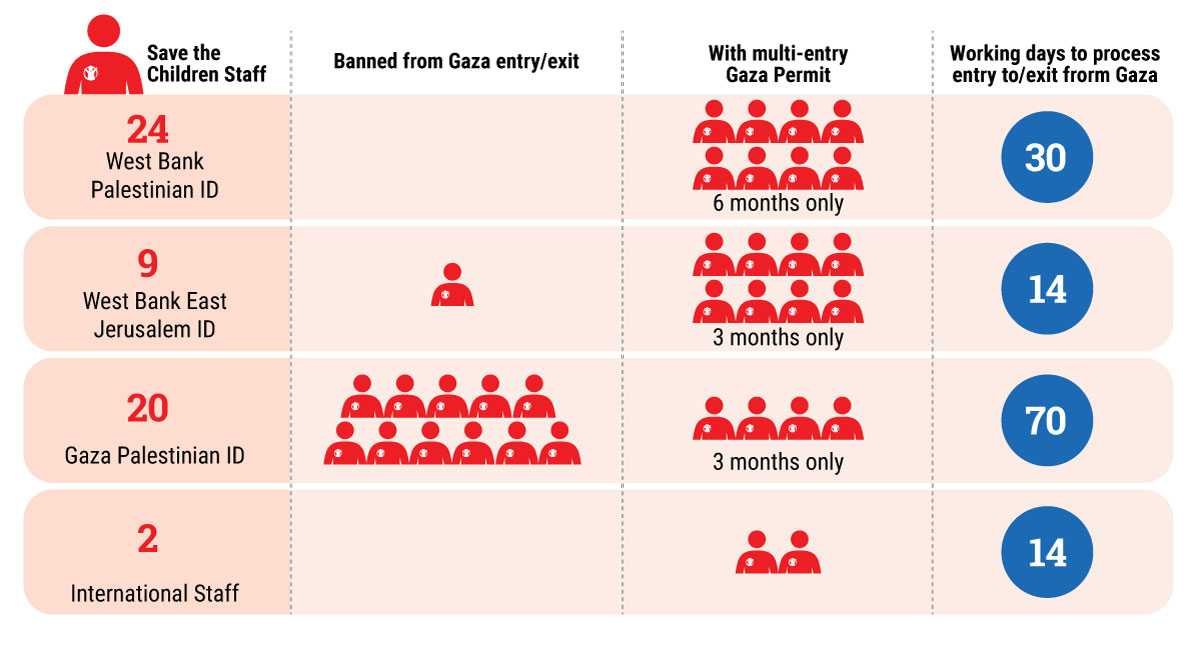