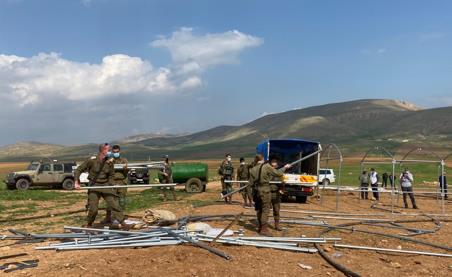 For more on the general and legal background, please see Flash Update #1 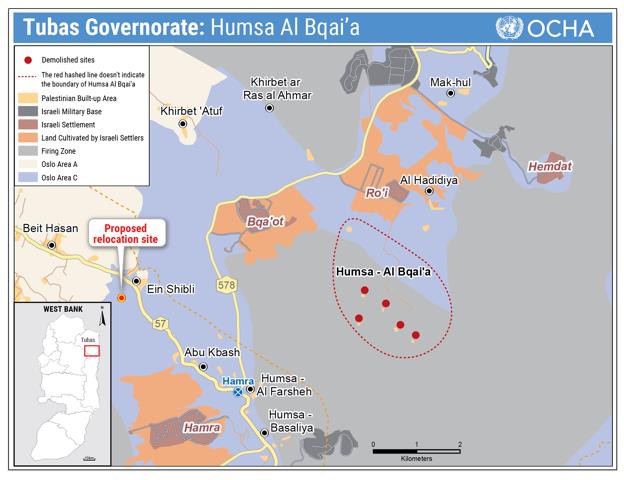 The Bedouin community of Humsa - Al Bqai’a, located in Area C in the northern Jordan Valley, has suffered from four large demolitions and confiscations in recent months, including three in the first week of February 2021. The February incidents resulted in the demolition or confiscation of 62 different structures, including 49 donor-funded structures, displacing over 60 people, including 35 children. The majority of the community is located in an area designated as a ‘firing zone’ for Israeli military training, where Palestinian residency or access is prohibited. On 16 February, the Israeli Civil Administration (ICA) confiscated five donor- funded livelihood tents, which were being erected at the time by the community in anticipation of stormy weather, and in the presence of members of the international community.

According to community representatives, the community was informed by the ICA that they had been assigned to a relocation site near the village of Ein Shibli, where their confiscated structures would be returned. The community has made appeals to the courts and rejected previous proposals to be moved to another location. The Civil Administration also indicated that they would remove the remaining structures in the part of Humsa - Al Bqai’a in the firing zone, if the community did not comply with the verbal order within 24 hours. These events triggered a joint visit of NGO, UN and EU Member States to the village on 4 February and calls by the international community to halt demolitions.

Following the demolition on 1 February 2021, an initial distribution of emergency shelters, food and essential household items was delivered by humanitarian partners, some of which was confiscated or damaged by Israeli forces on 3 February. A further assessment was undertaken by the humanitarian field team on 4 February, following which very basic emergency shelters, food and some essential household items were again provided, in addition to some cash assistance. 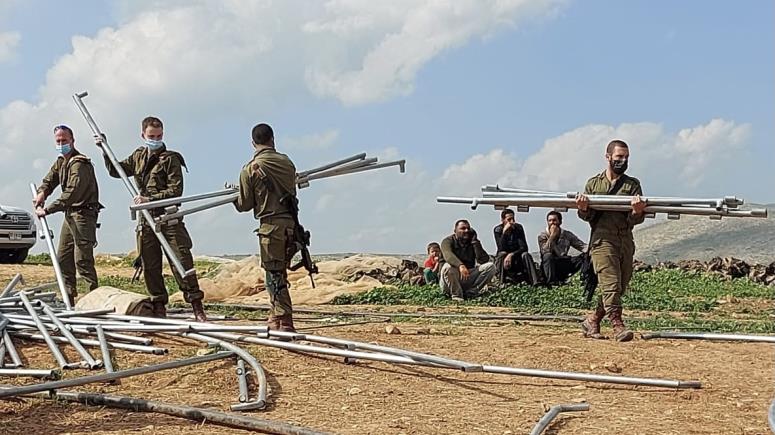 Protection: In addition to the trauma from repeated demolitions and the risk of further displacement, community members are experiencing high stress levels due to a lack of basic needs. Protection partners have been providing psychosocial support to the community, including the children, since the November 2020 demolition. A Mental Health and Psycho-Social Support Services (MHPSS)/Child protection assessment is being undertaken this week to ensure long-term support for children and their caregivers, dependent on their ability to access the site safely.

Shelter & Non-Food Items: While shelter partners have managed to deliver emergency shelters, a more durable shelter response is needed in the form of residential tents. All of the community’s animal shelters and storage units for fodder and related materials have also been demolished or confiscated, so livelihood replacements are also needed. On 16 February, a humanitarian partner succeeded in delivering 60 tons of fodder.

WASH: Although 20 water tanks were provided after the demolition on 3 November 2020, water vendors are reluctant to enter the area to refill these tanks, due to their fear of arrest or confiscation of vehicles. The WASH cluster is assessing alternative options of water delivery. Emergency hygiene kits, including dignity kits, have been delivered to the community by partners.

Health: Currently, no specific health needs have been identified; PRCS, and the health cluster, in general, stands ready to assist. The ongoing demolitions are taking place in the midst of the COVID-19 pandemic and the lack of adequate shelter is impeding the necessity for social distancing and other recommended safety measures.

Education: There is no primary or secondary school located within the community; the ongoing demolitions have disrupted the children’s attendance at the nearest school. Education needs are being assessed as part of the child protection assessment, and the Education Cluster is ready to respond, as needed.