Slight decline in overall demolitions during 2015

In November and December 2015, Israeli measures increased against at least twelve vulnerable Palestinian herding communities in Area C, the majority of them in the Jordan Valley (see map). These measures included the destruction or confiscation of residential structures, animal shelters and basic infrastructure; the issuance of demolition orders; and the temporary eviction of residents for Israeli military training. Some of the structures and items targeted had been provided by international organizations as humanitarian assistance. Together with the severe restrictions on access to grazing land, a coercive environment has been created persuading residents to leave.

During 2015 the Israeli authorities demolished or dismantled a total of 539 Palestinian-owned structures in the West Bank, the vast majority in Area C, on the grounds of lack of building permits. This figure was ten per cent lower than in 2014. Approximately 60 per cent of the structures targeted in both years were located in small herding communities in Area C, and some 20 per cent were provided as humanitarian assistance and funded by international donors.

One of the communities most affected by the recent measures is al Hadidiya in the northern Jordan Valley (Tubas governorate). The Israeli army demolished and/or confiscated a total of 33 residential tents and animal shelters belonging to three households, comprising 19 people of whom six were children. One family has had their home demolished five times since 2000.

The majority of the structures destroyed or confiscated (25) in al Hadidiya had been provided as humanitarian assistance in response to previous demolitions. A one kilometer section of road serving the community and funded by an international donor was also destroyed in November, despite an injunction by the Israeli Civil Administration (ICA) freezing the demolition. Overall, the value of the assistance destroyed was over 30,200 Euros.

Al Hadidiya, which has approximately 100 residents, has undergone multiple demolitions and displacements and is not connected to water or electricity networks. Part of the land where the community is located has been allocated to the adjacent Israeli settlement of Ro’i and has been declared a closed military area by the ICA. Despite the recent incidents, these families remain in the community, albeit under extremely precarious conditions.

Another community in the same area, Humsa al Baqaia, comprising 86 people, has been temporarily displaced on eight occasions since the beginning of November 2015, for periods ranging from six to eighteen hours, to allow for Israeli military training, severely disrupting the community’s livelihoods.

There are 38 herding communities located in West Bank areas designated by the Israeli authorities as closed for military training (“firing zones”). Since the beginning of 2012, OCHA has recorded nearly 120 incidents of temporary displacement of entire communities in these circumstances, mostly in the northern Jordan Valley. Families often report property losses as a result of these exercises, including grazing and agricultural land set on fire by live ammunition and the deaths of animals that could not be evacuated or tended to.

Demolitions and displacement under international law

According to the Israeli authorities, these communities were established without the required permits and do not possess title over the land, therefore enforcement measures against these communities are consistent with Israel’s obligation under international humanitarian law (IHL) to maintain law and order in an occupied territory (Article 43, Hague Regulations).

However, Article 43 must be interpreted and implemented in conjunction with other relevant provisions of IHL, particularly the Fourth Geneva Convention of 1949, including the prohibition on the destruction of private or public property unless absolutely necessary for military operations (Article 53), the prohibition on forcible transfers (Article 49), and the obligation to facilitate the rapid, unimpeded and impartial delivery of relief to civilians in need and assist personnel to the fullest extent practicable in carrying out their relief mission (Articles 59, 60).

Due to the lack of adequate planning and the discriminatory allocation of public land, it is nearly impossible for Palestinians to obtain building permits in most of Area C. Official data indicate that over 11,000 demolition orders – affecting an estimated 13,000 Palestinian-owned structures – were ‘outstanding’ in Area C by the end of 2014. 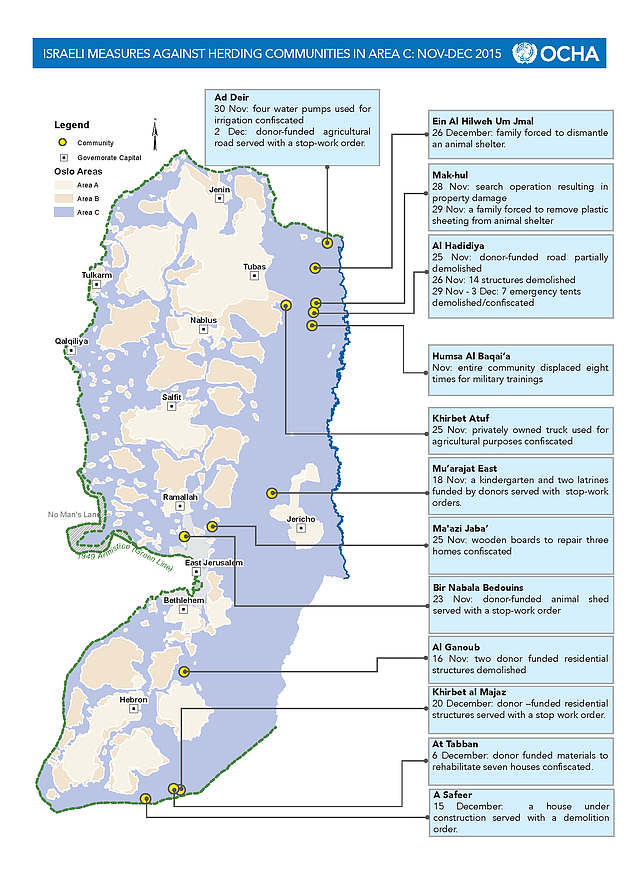