Published as part of
The Monthly Humanitarian Bulletin | May 2019

Hundreds of wounded protestors at risk of limb amputation

Years of blockade and other movement restrictions on people and materials, including medical resources, the deepening intra-Palestinian political divide, and a chronic energy crisis, have led to a serious deterioration in the availability and quality of health services in the Gaza Strip. The Gaza health sector suffers from chronic shortages of certain equipment and supplies, including antibiotics and chemotherapy drug stocks.[1] According to the World Health Organization (WHO), there has also been a serious deterioration in the “social determinants of health”, with “water from the aquifer basically unfit for human consumption, sewage flows largely untreated into the Mediterranean and the economy is stifled.”[2]

Further pressure strain has been placed on the Gaza health sector since March 2018, as a result of the massive casualties from the ongoing ‘Great March of Return’ (GMR) demonstrations. In a recently published report, WHO analysed the 277 fatalities and over 28,000 injuries recorded in the year between 30 March 2018 and 31 March 2019. Gunshot accounted for 210 of the fatalities and for 6,872 injuries, or 25 per cent of the total casualty caseload. “Although any health system in the world would be overwhelmed if it had to manage a high influx of trauma casualties every week; the most pressing concern was the staggering number of gunshot wounds.”[3] 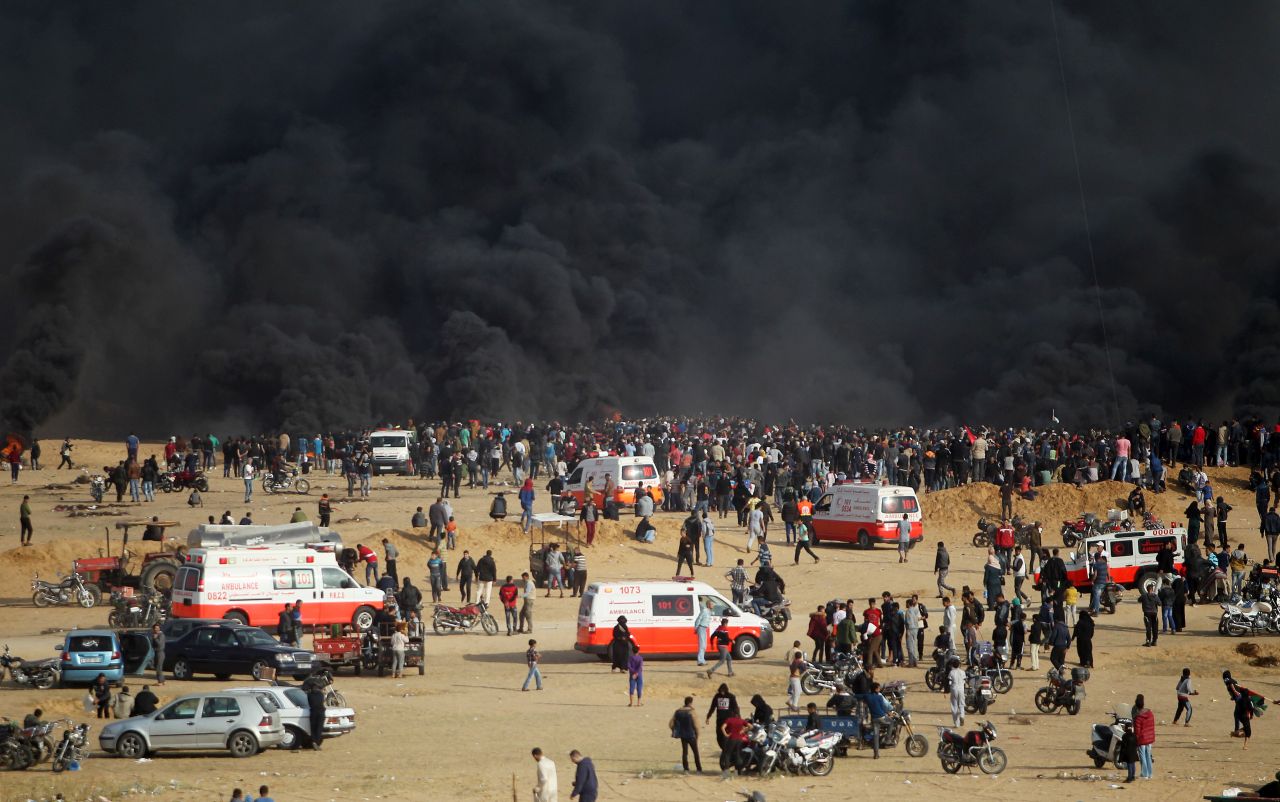 Some 172 people were permanently disabled as a result of their gunshot injuries, including 36 children. The major cause of permanent disability was amputation, with 121 amputations recorded during this period.[4] According to WHO, “amputation, be it arm, hand, leg or foot, is emotionally devastating for the victim but also for family and the care givers. It affects every element of life, including home and work. Even after surgery, long term rehabilitation, and a prosthetic, some will still need home adaptations and assistive devices.”[5]

Regarding the gunshot injuries, “many still face excessive damage to the bone, irreversible damage to neurovascular structures and extensive soft tissue damage,” with osteomyelitis, a bone infection, a particular concern. According to the report, gunshot wounds have resulted in between 1,209 and 1746 patients “who will need some form of specialized tertiary treatment with a wide range of multidisciplinary services; this cohort accounts for up to 30% of the total gunshot wounds to the limbs.”[6]

WHO warns, that “without this treatment being made available in Gaza the number of amputations may drastically increase in 2019.” Finding the funding to provide these services is a challenge to the overstretched and under-resourced health sector in Gaza. On 8 May 2019, the Humanitarian Coordinator for the oPt, Jamie McGoldrick, appealed for additional funding to meet the needs of the GMR wounded: highlighted that resources are urgently required to support the health system in Gaza: “The health structures really are in bad shape and that’s why we have put this appeal out for $20 million to address the needs of those 1,700 people, but also to support the health system”[7] 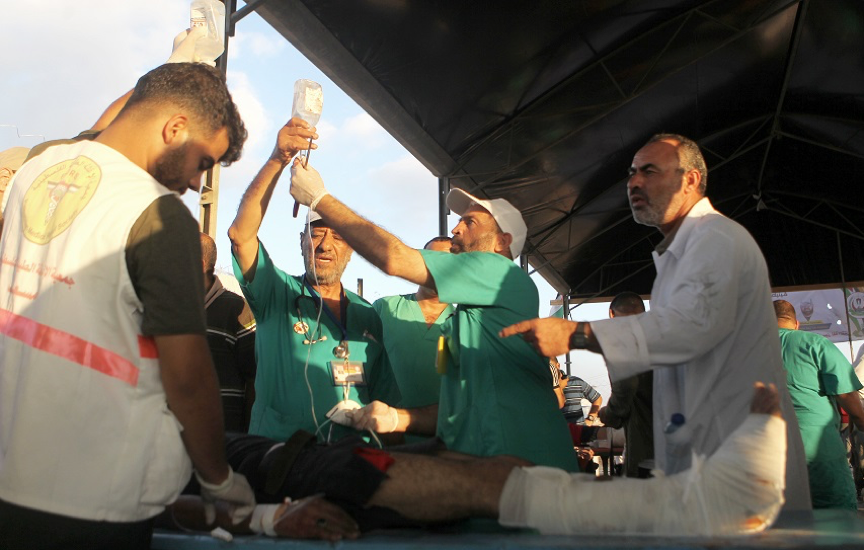 With local capacity in Gaza overburdened, the Palestinian Ministry of Health (MoH) frequently refers patients who need specialized health care to more advanced facilities in the West Bank, including East Jerusalem, and in Israel. To access West Bank and Israeli hospitals, patients and their companions require permits from the Israeli authorities to leave Gaza through the Erez checkpoint. The application is submitted once the medical appointment has been arranged and approved by the MoH in Ramallah. 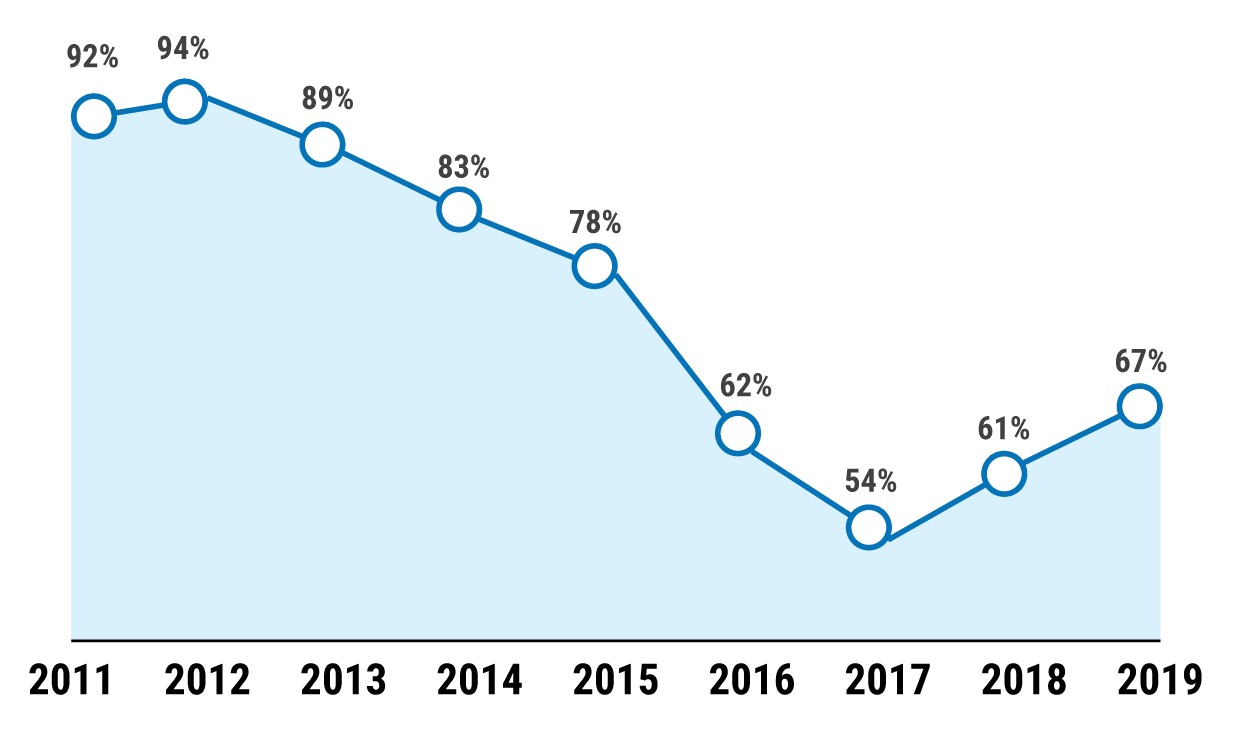 However, the approval rate for patients injured during GMR demonstrations is significantly lower than for the rates cited above. According to data from Gaza’s Coordination and Liaison Office, between 30 March 2018 and 30 April 2019, the Israeli authorities received 550 applications from patients injured in demonstrations to exit Gaza via Erez crossing to access healthcare. Of those applications, only 17 per cent were approved, 26 per cent were denied and 56 per cent were delayed.

The other crossing point to exit Gaza is controlled by Egypt, and in previous years thousands of patients previously relied on Egypt as an accessible and affordable destination for medical services. However, the sporadic opening of the Rafah border with Gaza by Egypt since mid-2013 has significantly reduced access for MoH referrals.

Despite the almost continuous operation of the Rafah crossing since July 2018, the exit of people through it has been delayed and impeded for a range of reasons, including unclear criteria regarding the selection of those allowed to cross every day. In 2018, Rafah was open for 188 days in both directions, during which there were 59,849 crossings by Palestinians from Gaza: of these, 1,510 were patients and 1,464 were patient companions. In 2018 only eight per cent (including companions) of medical referrals from Gaza were to Egypt.[9]

Personal story: ‘’I lost consciousness and woke up the next day in the hospital without my leg.” 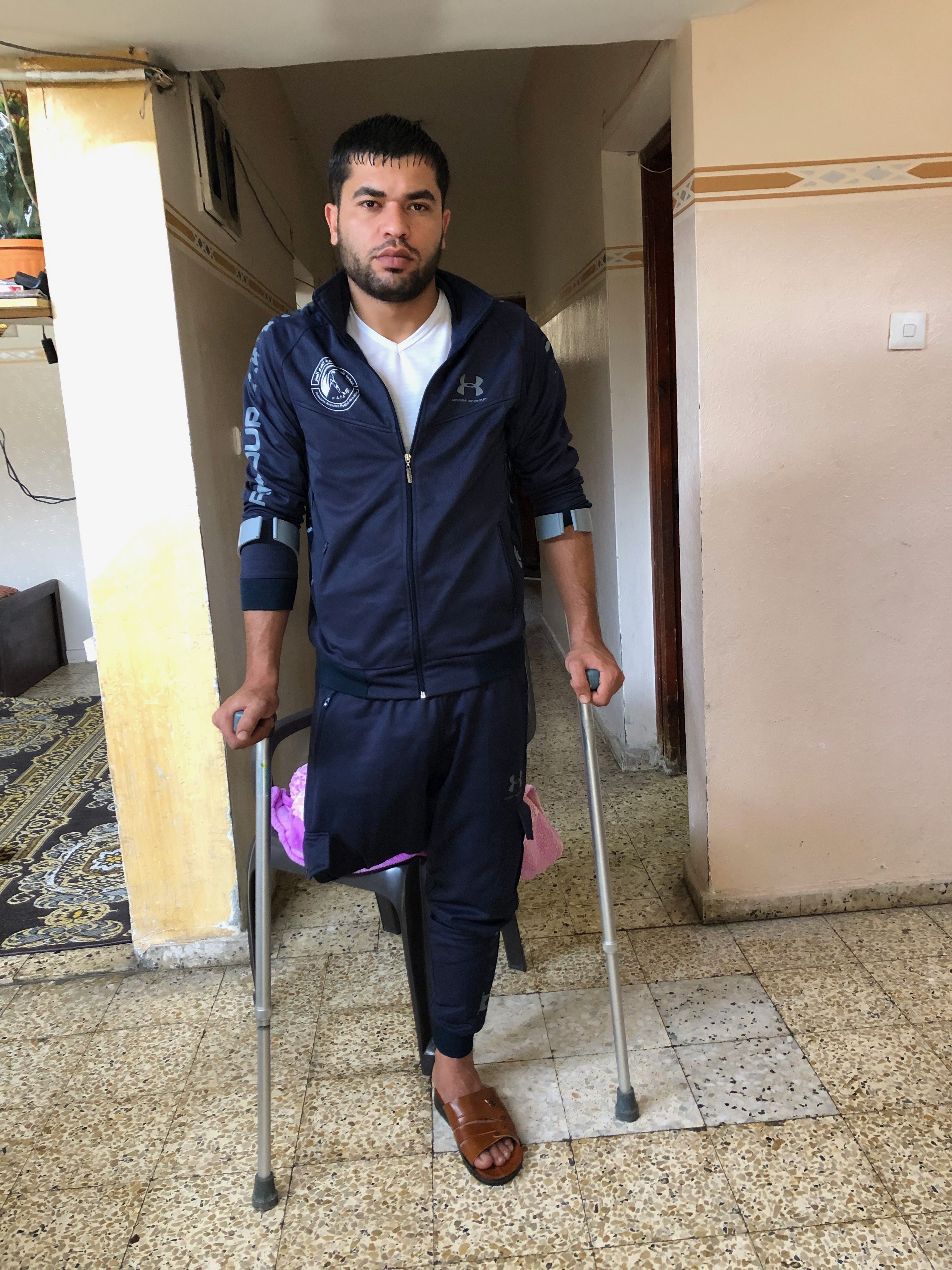 Fadi Shaqoura is a 25-year-old Palestinian who lives in Jabaliya camp with his nine-member family. Fadi was injured on 23 February 2018, during one of the demonstrations held after the US announced its decision to move its embassy from Tel Aviv to Jerusalem.

According to Fadi: “I was just watching when I was hit by a bullet that entered and exited my left leg, then exploded in my right leg, which had to be amputated. Following my injury, I lost consciousness and woke up the next day in the hospital without my leg. I asked where my leg was and they told me it had been amputated. My left leg was also severely injured; I couldn’t walk and stayed in a wheelchair for six months.”

Fadi’s mother, Hanan, added: “When Fadi was injured, they told me that he had passed away. When I went to the hospital to see him, I found him lying on the bed with his amputated leg over his body. I saw that he was still breathing and I told the doctors that he was still alive. At that moment Fadi woke up and called me.”

In November 2018, Fadi submitted his first referral request for an appointment at the Bethlehem Association for Rehabilitation in the West Bank.

“It has been over a year now and there is no change in my situation. I have no one to help me or provide any support, even with medicine. I tried to obtain a referral through the Egyptian-controlled Rafah crossing, but an artificial limb is not covered financially in Egypt.”

His mother adds: “Our economic situation is difficult. I’m very sick and can’t walk; I have had four surgeries on my back. We all need medicine and we have large debts. Fadi is still very young and he wants to walk again.”

Fadi concludes: “I really don’t understand why I can’t travel and receive treatment. All I want is to have an artificial leg.”

Personal story: “I need to go to Egypt again for further treatment but I ‘m not sure if I’ll manage to cross.”

Dawlat Hamdeen, a 33-year-old Palestinian woman from the Beit Hanoun area in the northern Gaza Strip, was severely injured by an explosive bullet in her right thigh during a GMR demonstration on 14 May 2018, when over 50 protestors were killed and thousands were injured.[10] 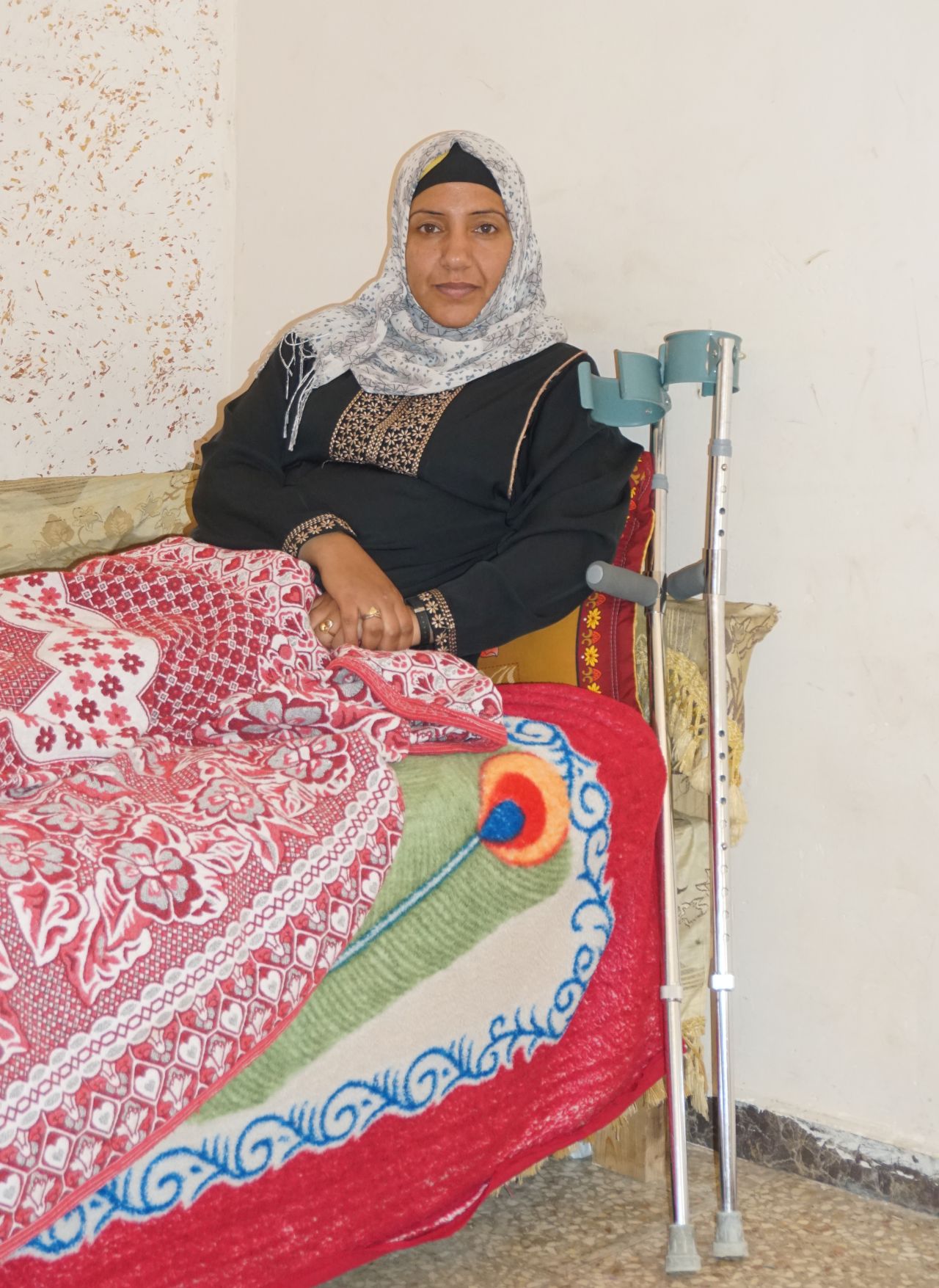 Dawlat recalls: “When I was shot, I lost my sight but I was able to hear the medics around me. Shrapnel from the bullet tore out the tissues, veins, arteries, and even the bones of my thigh and I had severe bleeding that caused my hemoglobin level to drop. One day before my injury, I asked my sister not to participate. I was anxious that she might be killed or injured, but it was me who got shot. It was my first time participating in the protests.”

Dawlat’s mother said: “When I arrived at the hospital where Dawlat was receiving treatment, the doctors told me that she would die within an hour. She had septicemia and an air embolism. Her body became swollen and she received 62 units of blood. Dawlat stayed five days in the intensive care unit. We were expecting her death at any minute. The hospital was so crowded with the wounded that when Dawlat regained consciousness, and whenever she needed help, doctors were not available.”

Dawlat’s father, Fawzi, said: “Dawlat was in a very critical situation. We started procedures for her medical referral abroad. We applied for an exit permit for her twice, the first time for treatment in Jordan and the second in Jerusalem, via the Israeli-controlled Erez crossing. Her application was denied both times for security reasons. The second time, we received an official document from the Israeli authorities that Dawlat’s permit had been refused, which is an indication that we cannot cross Erez at all.

Instead, in October, we tried to travel to Egypt. The first two attempts to cross the Egyptian-controlled Rafah crossing were unsuccessful; we were sent back, first at the Palestinian side and then at the Egyptian side for reasons that are unclear. We finally managed to exit Gaza on the third attempt after spending almost one full day at the crossing. From Rafah crossing to the Suez Canal, a trip of nearly 200 kilometres, we were stopped at 32 checkpoints and our luggage were inspected at each one of them.”

After overcoming innumerable obstacles and personal suffering, including moving between hospitals, referral requests and obstacles to financial coverage, Dawlat finally received appropriate treatment in Egypt. “I stayed in Egypt for four months and underwent four surgeries, including plastic surgery for both legs. I still cannot bend my leg because of the metal bar stabilizing my bone and I rely on crutches to walk. I need to go to Egypt again in November for further treatment but I’m not sure if I’ll manage to cross. I’m happy, at least, that I was able to travel to receive treatment.”

[1] Lack of medicines and disposables is particularly severe in the Gaza Strip, where 46% of items on the Essential Medicines List and 27% of items on the Essential Medical Disposables List had, on average, less than a month’s supply remaining during 2018. WHO, Health conditions in the occupied Palestinian territory, including East Jerusalem, and in the occupied Syrian Golan, 1 May 2019. Para.21.

[2] WHO, Health Cluster oPt, Emergency Trauma Response to the Gaza Mass Demonstrations 2018–2019: A One-Year Review of Trauma Data and the Humanitarian Consequences, May 2019, p. 10.