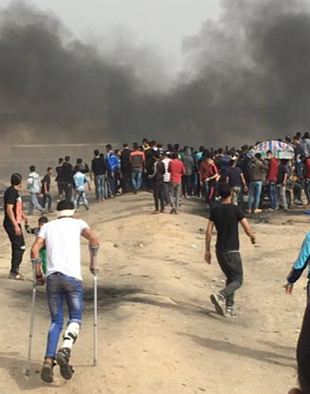 Mass demonstrations along Israel’s perimeter fence with Gaza took place today, for the fourth consecutive Friday, as part of the ‘Great March of Return’ expected to continue up to 15 May. As of 19:00, four Palestinians, including one child, have been killed by Israeli forces during the events, and 729, including 45 children, have been injured, according to the Ministry of Health (MoH) in Gaza. The MoH also indicated that 42 per cent of the injuries (305 people) have been hospitalized, including 156 people hit by live ammunition. With limited resources, health providers are struggling to deal with the massive influx of casualties and are in urgent need of additional support and funding.

Paramedics who evacuated the child killed today indicated that he was shot with live ammunition to the head, at around 50 meters from the fence, east of Jabalia, with no evidence that the posed any threat to Israeli forces. The UN Special Coordinator for the Middle East Peace Process expressed outrage over the killing and called for an investigation.

The overall number of participants in today’s demonstrations, ranging from 5,000 to 10,000 according to different estimates, was lower than on 13 April, continuing the declining trend observed in previous weeks. The gatherings took place at the same five tent camps, however, prior to the start of today’s demonstrations, the tents were moved 50-100 metres towards the fence, and placed at 600-650 metres distance from it. Organizers have also built sand barriers alongside the camps, reportedly to protect the demonstrators. Earlier today, the Israeli military dropped leaflets in the area of the camps warning Palestinians to keep away from the fence. 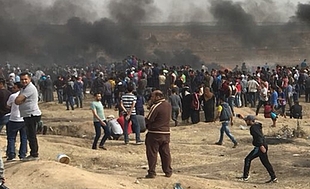 Following the noon prayers, hundreds of demonstrators marched towards the fence, where they burned tires, threw rocks and, according to Israeli sources, fire bombs at Israeli forces. On several occasions, demonstrators reportedly flew kites with flaming materials attached to them into Israeli territory, some of which reached Israel, but did not result in casualties or damage. Israeli forces responded to today’s demonstrations by firing live ammunition, including by snipers, rubber bullets and tear gas canisters, also dropped from drones.

Overall, since the start of the events on 30 March, 37 Palestinians have been killed by Israeli forces in Gaza, 32 during the course of the demonstrations, including four children, and five in other circumstances. Another two Palestinians were shot and killed in Israel, after crossing the fence, and their bodies are being withheld by the Israeli authorities. The number of injuries has exceeded 4,900, according to the MoH. No Israeli casualties have been reported.

The large number of casualties among unarmed demonstrators, including a high percentage of demonstrators hit by live ammunition, has raised concerns about excessive use of force, alongside calls for independent investigations, including by the UN Secretary-General and the UN High Commissioner for Human Rights. Israeli authorities have stated that many of the fatalities were members of Hamas and other armed groups and have accused the MoH of inflating the number of wounded by live ammunition.

The surge in humanitarian needs as a result of the violence and casualties takes place against a backdrop of an overall dire humanitarian situation in the Gaza Strip. The health system in particular is on the verge of collapse as a result of the 10-year blockade, the deepening intra-Palestinian political divide, deteriorating energy crisis, inconsistent payment of public sector medical personnel, and growing shortages in medicines and disposables. A large percentage of patients hospitalized since the start of the demonstrations had severe wounds to the lower extremities, requiring complex surgical operations; many of them will have disabilities for life.

The MoH, along with the Palestinian Red Crescent Society, have established medical trauma stabilization points (TSP) next to the five camps along the fence, to stabilize injuries before referring them to nearby hospitals. Since the start of the demonstrations at least 47 health personnel have been injured and 13 ambulances damaged by Israeli fire, according to the MoH.

To reduce the loss of life and prevent long-term disabilities, as much as possible, humanitarian partners in the health sector have been supporting the capacity for emergency trauma management in the initial hours of an injury. Since 30 March, Health Cluster partners and Médecins Sans Frontières (MSF) have deployed six medical teams, including general, vascular, orthopaedic and reconstructive surgeons to Gaza. MSF is also providing some post-operative care. Partners have also released life-saving medical supplies, including 42 types of drugs and 49 types of medical disposables, as well as trauma and surgical supply kits, serving the medical TSP and the 14 public hospitals. Almost 80 per cent of the Health Cluster prepositioned stocks have been so far released.

The exposure to violence over the past three weeks has also had significant mental health and psychosocial (MHPSS) ramifications, particularly among children. Since 30 March, partners in the MHPSS and Child Protection working groups of the Protection Cluster have referred 505 cases of injured children for an initial assessment; identified, through school counsellors, 175 cases of injured children for psychosocial treatment; carried out 115 emergency home visits; and have answered multiple calls on a free counselling hotline.

Other partners in the Protection Cluster have been collecting and triangulating information about casualties, with focus on people hit by live ammunition, and entering cases into a centralized database; conducting initial investigations and legal analysis; and providing legal assistance to individuals in need of travel permits for urgent treatment outside Gaza.

Given the scope of events and the limited capacity of service providers in Gaza, on 19 April, the Humanitarian Coordinator, Jamie McGoldrick, called for the protection of Palestinian demonstrators and for donor support to humanitarian partners, by providing US$ 5.3 million in immediate funding to meet emergency health, psycho-social and protection needs until 31 May 2018. This funding is required in addition to the over $ 400 million requested in the 2018 Humanitarian Response Plan for interventions in the Gaza Strip.