This article was contributed by the Norwegian Refugee Council

Evictions have become routine for Eitidal, aged 30, a wife and mother of two daughters: Layan, 11, and Rimas, 7. Her husband, Medhat, 33, suffers from epileptic seizures and psychological problems, and has been unable to find regular employment. Over the past few years, the family has been evicted twice over accumulated, unpaid rent.

According to the Ministry of Public Works and Housing, some 2,000 families in Gaza were at risk of eviction in 2018 over their inability to pay rent. In August this year, the Ministry of Social Development in Gaza estimated the number of families under eviction risk at 9,356. The two different sources make it difficult to verify the increase in families facing eviction, but the numbers suggest a significantly worsening situation. 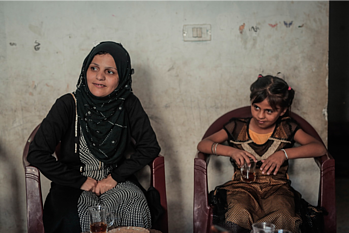 Other indicators such as the Palestine Monetary Authority’s data of a six per cent increase in returned checks over two years and an associated five per cent rise in the prosecution of cases against debtors last year, point to a growing number of families defaulting on loans and rental payments.

Out of 522 vulnerable households surveyed in the northern Gaza Strip, 73 per cent, reported that they struggled to pay their rent.

Out of 522 vulnerable households, comprising 3,366 individuals, surveyed by the Norwegian Refugee Council (NRC) in the northern Gaza Strip between February and March this year, 381, or 73 per cent, reported that they struggled to pay their rent.[1] Unemployment among the 522 households stood at 61 per cent, a further 21 per cent had irregular work and 83 per cent reported debts ranging from NIS 200 (US$57) to NIS 6,600 ($1,875). The unemployment rate in the Gaza Strip among the general population for the third quarter of 2019 stood at 45.1 per cent.[2]

Eitidal and her family have been renting their home in Jabalia for the past year. Less than half of the NRC-surveyed households have lived in the same place for more than one year due to their inability to pay rent. The family receives cash-for-rent from the NRC.

“Just before NRC’s support, the landlord had warned us that we had to search quickly for another house as we had four months of unpaid rent,” said Eitidal. “We’re still worried about what will happen when the six months of cash for rent assistance end and we fear eviction.”

Of the 522 households, 23 per cent live in homes that fail to meet the minimum standards established by the Shelter Cluster, an inter-agency mechanism led by NRC that coordinates the humanitarian shelter response. Four per cent live in informal shelters such as storage units, which lack running water and sanitation. According to the NRC’s surveyors, Eitidal’s apartment was in particularly poor conditions, including due to limited ventilation, and infestation with mice and cockroaches.

Of the 522 surveyed households, 23 per cent live in homes that fail to meet the minimum standards established by the Shelter Cluster.

Prior to the last eviction in April 2018, Eitidal’s landlord cut off their electricity and submitted a complaint to the police over accumulated rental debt.

Of the half who responded in the NRC survey to questions about actions taken against them by landlords, 62 per cent reported eviction threats, 20 per cent had experienced cuts to electricity or water supply, eight per cent had signed promissory notes and five per cent ended up in prison. 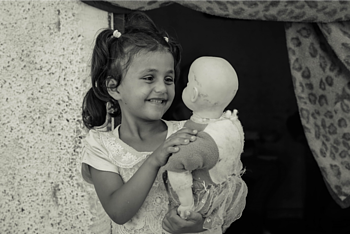 Too often, Eitidal says, she finds herself without food for her children. In May, her daughter Rimas, tired and hungry after school exams, ate leftover food thrown away by a nearby restaurant and had an attack of food poisoning. Since hearing of the story, the restaurant owner has given the family cooked rice for free, and whenever Eitidal has nothing to feed her children, she sends them there to eat.

households at risk of eviction by type of action 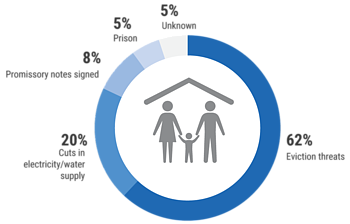 Even drinking water can be hard to come by. “We don’t have either a water tank or a jerry can. I send my daughters to the supermarkets to fill 10 water bottles at a cost of one shekel [$0.28]. Sometimes we don’t even have one shekel and must depend on the goodwill of neighbours.”

According to the 2018 food security survey by the Palestinian Central Bureau of Statistics, 68.5 per cent of Gaza’s households are food insecure, with 47 per cent severely affected. Eitidal’s family receives cash assistance of NIS 1,000 ($284) from the Ministry of Social Development every six months and UNRWA food vouchers every three months.

Of the 522 households surveyed, 70 per cent receive support from a combination of the Ministry of Social Development, UNRWA or the World Food Programme (WFP). A significant 16 per cent, or 84 households, however, reported receiving no assistance and having no source of income.

Eitidal has had to sell the food items she purchases with the UNRWA vouchers for half their worth to have money for medicine, gas and other basic necessities.

According to a report by aid agency Action Against Hunger, the Ministry of Social Development cut support to 1,000 families in April 2018 and to a further 200 in August of that year. Other families saw their assistance reduced by 30 per cent. A fiscal crisis for much of 2019, further precipitated by declines in foreign aid and an unresolved dispute over Israel’s transfer of taxes and import duties to the Palestinian Authority, has forced severe public spending cuts, including a rollback in social assistance.[3] As a result, more Palestinians in Gaza have become dependent on loans, forcing them into mounting debt, with a growing number of families facing legal action for defaulting on loans and rental payments.

Eitidal has had to sell the food items she purchases with the UNRWA vouchers for half their worth to have money for medicine, gas and other basic necessities. This is common practice among poor families in Gaza: more than half of the households surveyed by NRC resorted to selling the assistance received. Otherwise, Eitidal relies on the goodwill of relatives and strangers to survive. 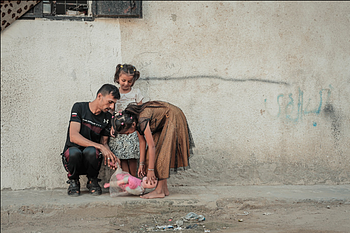 Earlier this year, Eitidal, in desperate need of money, promised the food items she was due to receive to two people. When she was unable to provide the second person with the items, he made a complaint to the police. As a result, Eitidal’s husband spent 19 days behind bars.

“The police came to take my husband away to jail and my daughters started crying,” said Eitidal. “Since then, they’re terrified every time they see a police officer.”

More recently, Eitidal signed a promissory note (a written promise to pay an agreed sum by a certain date) for outstanding debts of NIS 220 ($63) to a supermarket owner, who involved the police to force the family to pay the full amount in instalments.

“The day we receive the cash assistance from the Ministry of Social Development is the worst ever,” said Eitidal. “That’s when all the lenders come asking for their money.”

Of the $14 million requested in the 2019 Humanitarian Response Plan for shelter-related interventions, only 28 per cent have been raised so far.

The ability of humanitarian organizations to support families in Gaza at risk of eviction has been recently hampered by severe funding shortages. For example, of the $14 million requested in the 2019 Humanitarian Response Plan for shelter-related interventions, only 28 per cent ($3.9 million) have been raised so far. One of the NRC projects, currently under implementation with funding from the Norwegian Ministry of Foreign Affairs, entails the provision of cash-for-rent to 280 vulnerable households (including Eitidal’s family), which are either at risk of eviction, or have been re-housed after having been evicted due to their inability to pay rent. In 2020, NRC aims at developing the cash-for-rent program into a multi-purpose cash response, including support for other essential needs, such as utilities, healthcare and food.

Addressing the immediate needs of the most vulnerable households in Gaza in the coming year, including those at risk of eviction, would require a much stronger resource mobilization by donors than in 2019. A more sustainable solution, however, would require more structural changes, including a durable, long-term truce (short of a peace agreement), a lifting of the blockade, and ending the internal Palestinian political divide.

[1] Of the surveyed families, 20 per cent were headed by females. The selection of households targeted in the survey was based on pre-defined criteria, which was applied to datasets about vulnerable families provided by the ministries of Public Works and Housing, Social Development and Education and Higher Education, as well as by  NRC itself.

[3] In October 2019 the PA agreed to resume receiving the revenues under Israel’s conditions, starting with a $430 million immediate transfer.