"I wish I had been inside the warehouse when it was bombed. I can’t describe the pain of having to wake up every morning and see all that we built, and our livelihood destroyed."

On 15 May, the largest warehouse for agricultural supplies in the Gaza Strip, owned by the Khudair Brothers Company, was destroyed in Beit Lahia, Northern Gaza, by Israeli artillery shelling. Founded in 1985 by four brothers, the warehouse provided pesticides, fertilisers and materials such as plastic, nylon and water pipes, accounting for over 50 per cent of all agricultural supplies across the Gaza Strip. According to Al Mezan’s Research and Technical Assistance Unit, the 4,000m² warehouse stored around 300 tons of highly hazardous pesticides and a 1,000 tons of fertilisers.[2]

Prior to the destruction, the company had just bought agricultural supplies on credit which all perished in the flames, leaving it in severe debt. The damage is estimated to amount to over US$13 million[3] and the loss of livelihood has affected one hundred family members, mostly children.

The owners who live only metres away from the warehouse, received no warning ahead of the shelling. The scale of destruction was so large that the Civil Defence and municipal crews took several days to control the fire.[4] The thick smoke and the burning agrochemicals and plastic supplies produced intense, unpleasant fumes that lasted for weeks. When OCHA visited the site on 7 July, more than seven weeks after the incident, the smell of chemicals was still unbearable. Residents in the vicinity had to leave their homes.

Some family members developed rashes resulting from exposure to the fumes and had to seek medical treatment. One neighbour was pregnant and suffered a miscarriage a few days after the incident, which medical staff of Shifa hospital attribute to the chemical inhalation. Other neighbours have been hospitalised due to respiratory difficulties, while another pregnant woman left the area to ensure the safety of her unborn child.

Concerned about health and safety, immediately after the first strike, the local authorities deployed police forces to block access to the area. A technical committee led by the Ministry of Agriculture made an assessment and developed guidelines for the safe removal of the chemicals.

“All we want is for the chemicals to be removed. We can’t do it ourselves because they are toxic, and we can’t just dump them anywhere. If we did, it would be a disaster for all of Gaza. Now, it is a disaster for us and everyone living in the vicinity. We receive complaints from our neighbours every day. If the toxic rubble is left like this, it will end up polluting the groundwater and have a terrible environmental impact on all of Gaza,” said Mahmoud Khudair on 7 July.

On 22 September, the UN Development Programme (UNDP) started to remove large quantities of the hazardous waste, to be transferred to a special treatment facility in eastern Gaza, to ensure that the soil and groundwater do not become contaminated. The limited capacity and expertise in this area has delayed the intervention and retarded response.

[3] Estimated of the Food Security Sector.

[4] Al Meezan reported that the effort to extinguish the fire lasted well beyond the end of escalation, until 6 June 2021. 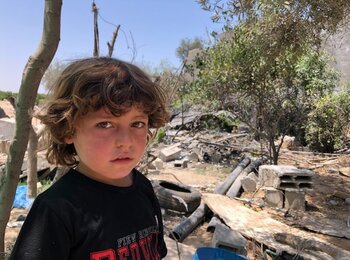