Funding for humanitarian activities in the occupied Palestinian territory (oPt) is at an all-time low. At the end of September, only $159 million had been secured of a requested $539.7 million for the 2018 Humanitarian Response Plan (HRP), the multi-agency strategy and funding appeal for the humanitarian community in the oPt. Funding for the oPt HRP is at only 30 per cent, significantly lower than the current global average of 42 per cent.

Funding gaps are primarily the result of the decline in contributions for UNRWA, whose projects constitute 53 per cent of the overall requirements for the 2018 HRP. This follows the decision by the United States, the Agency’s largest donor, to substantially reduce financial support, forcing UNRWA to discontinue or scale back its activities in Gaza and the West Bank (see below). The US has substantially reduced all its funding to the oPt, including deciding not to disburse more than $200 million from USAID’s approved budget for the 2017 fiscal year in the West Bank and Gaza, a further $25 million for the East Jerusalem hospital network, and, most recently, $10 million for Israeli and Palestinian co-existence groups.[1]

In parallel to the unprecedented financial crisis faced by UNRWA, nearly all agencies requesting through the HRP have received less funding in 2018 than in previous years. This leaves humanitarian partners ill-positioned to meet emerging needs or respond to the deterioration of the humanitarian situation in Gaza, where the enormous rise in casualties from the ‘Great March of Return’ demonstration has placed additional strain on Gaza’s overburdened health system.

To respond to this recent crisis, humanitarian agencies have appealed for $43.8 million through the end of 2018 for emergency interventions, particularly for trauma management and emergency healthcare. At the end of September, approximately 52 per cent of this request had been provided, leaving a gap of $21.1 million.[2] 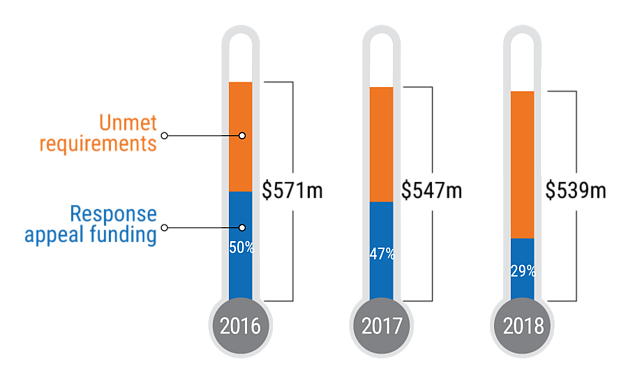 In the context of poor HRP funding, the oPt Humanitarian Fund (HF) [3] has become even more vital as a tool to meet urgent needs, as well as an important resource for NGO partners. The oPt HF is an emergency pooled fund supported by some of the major donors to the oPt and managed by UN OCHA on behalf of the Humanitarian Coordinator.[4] It is designed to allocate funds quickly for unexpected emergencies or unforeseen events, in addition to delivering strategic responses which have been included in the HRP but remain unfunded. The HF is unable to compensate for the huge shortfall in the HRP but has succeeded in alleviating some of the more critical humanitarian needs.

On 17 September, the Humanitarian Coordinator, Jamie McGoldrick, announced the release of one million dollars from the HF for the UN-assisted Emergency Fuel Programme.[5] Since 2013, the UN has coordinated the delivery of emergency fuel to run back-up generators to some 250 critical health, water and sanitation facilities in Gaza. This ensures a minimal level of lifesaving health, water and sanitation services despite the chronic electricity deficit. Targeted facilities include surgery and emergency care units, sewage pumping stations and water extraction wells. Funds donated for emergency fuel in 2018 are exhausted, with the UN delivering its final stocks on 5 September, and at least $2 million in additional support is needed to cover the operation of skeleton services through the end of 2018.

This latest allocation brings the total amount of oPt HF support to Gaza in 2018 to $10.5 million.[6] The HF still has a balance of $10.3 million. Given the deteriorating conditions in the oPt, particularly in Gaza, and the shortfall in funding, on 22 September the Humanitarian Coordinator launched an additional $8.3 million as part of the standard allocation. This included $6.3 million for health, food security and WASH HRP projects in Gaza, and $2 million for food security and livelihood, shelter, child protection and education HRP projects in the West Bank. The remaining $2 million will be kept in reserve for unforeseen emergencies. 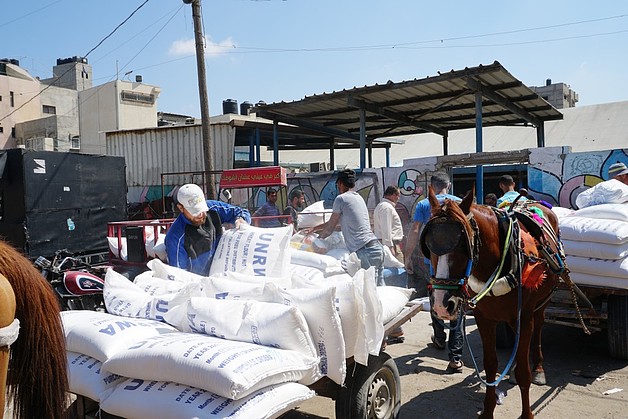 The decline in funding this year for UNRWA, the single largest humanitarian actor in the oPt, accounts for a significant proportion of the overall drop in humanitarian funding for the oPt in 2018. UNRWA’s funding is almost entirely dependent on voluntary contributions from UN member states, especially for its Programme Budget which covers most of the salaries and activities for core services such as education, health, camp improvement and social services across its five fields of operation.[7] Donor funding is also essential for its Emergency Appeals, most of which are part of the HRP and address the needs of those impacted by ongoing crises, including in the West Bank and Gaza.

The Agency began 2018 with a Programme Budget shortfall of $146 million for all its areas of operation in the Middle East following a decision by the US in mid-January to withhold $300 million of an expected contribution of over $360 million. This decision precipitated the most serious financial crisis in UNRWA’s history and threatens the Agency’s operations. Gaza, where UNRWA operates 375 schools and employs 13,000 local employees, was hit particularly badly by the cuts to the Agency’s core budget. In addition, the US, which provided $90 million in 2017 for emergency activities in the OPT, has not made any commitment for the Emergency Appeals in 2018.

The US announcement left the Agency with an end-of-year cash shortfall of $446 million in all of its five areas of operation in the Middle East. More than 20 UNRWA donors advanced their contributions for 2018 to ease cash flow during the first months of 2018. As a result of additional and intensive resource mobilization efforts during the first half of the year, including an allocation and loan of some $30 million by the UN Central Emergency Response Fund (CERF), the Agency was able to reduce the funding gap up to the end of the year to $217 million. Despite this remarkable achievement, the remaining shortfall has forced UNRWA to discontinue a number of activities in the West Bank, including cash for work, community mental health and mobile health clinic programmes, and to adjust key interventions in Gaza, including food and cash assistance to over one million refugees. Most significantly, UNRWA was able to reopen its schools in Gaza and the West Bank at the end of August.

In a ministerial meeting in New York on 27 September, UNRWA succeeded in raising an additional $122 million to reduce its overall deficit to $64 million. In a press statement following the meeting, UNRWA indicated that: “UN Member States reaffirmed the fundamental rights of Palestine refugees under international law and obligations of the international community. Participants expressed strong political support for UNRWA, its mandate and staff, and its critical services to Palestine refugees. Additionally, they applauded UNRWA for its remarkable achievements, especially this last year, in funding diversification and improved efficiency of its programming.”

[1] On a positive note, the World Bank has increased its allocation from $55 million to $90 million for the West Bank and Gaza over the next year, part of which will be used to create some 4,400 short-term employment opportunities. UNDP has also accelerated its emergency economic assistance programme aimed at creating over 2,500 immediate and short-term job opportunities in Gaza over a 12-month period, particularly for youth and women.

[2] For further details on this appeal see: OCHA, The Humanitarian Bulletin, August 2018.

[6] The UN’s global emergency response fund, the UN Central Emergency Response Fund (CERF), has also allocated $1.26 million to the oPt since the beginning of the year.

[7] In addition to the West Bank and Gaza Strip, UNRWA also operates in Jordan, Lebanon and Syria.