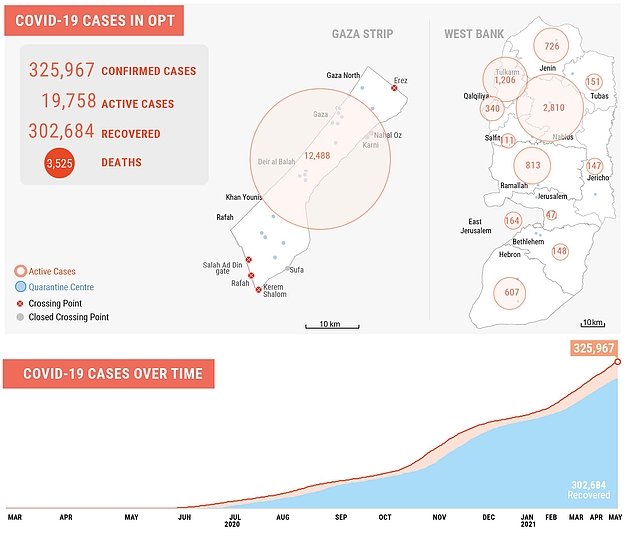 April witnessed a 20 per cent increase in active COVID-19 cases in the oPt, with 55,089 additional Palestinians testing positive, and 59,716 people recovering, according to the Palestinian Ministry of Health (MoH). The cumulative number of cases is 325,967, with 302,684 people recovered from the virus. The number of patients in intensive care units (ICU) declined from 209 at the end of March to 146, with those requiring mechanical ventilation falling from 68 to 43.

A total of 644 people died during April, compared with 622 in March, bringing to 3,525 the cumulative number of fatalities due to the virus: 2,626 in the West Bank, including East Jerusalem, and 899 in the Gaza Strip. The Case Fatality Rate (CFR), the proportion of deaths among confirmed cases, remains at 1.1 per cent in the oPt, compared with 0.76 in Israel, but less than 1.24 per cent in Jordan, and 5.86 per cent in Egypt.

The Health Cluster continues to mobilize resources to respond to increased COVID-19 needs, beyond what had been included in the 2021 Humanitarian Response Plan. Partners are requesting an additional US$36,821,796 to cover needs from April to December, focusing on diagnostics, case management, Infection Prevention and Control (IPC) supplies and Risk Communication and Community Engagement (RCCE).

Depending on their residency status and where they work, Palestinians may be vaccinated by either the Palestinian authorities or the Israeli authorities. So far, 253,937 Palestinians have been vaccinated by one of these authorities, 217,441 in the West Bank (beyond East Jerusalem), and 36,496 in Gaza. These include about 110,000 Palestinians working in Israel or in Israeli settlements, who received their second dose from the Israeli authorities on 20 April. These figures represent about five per cent of the total Palestinian population, and eight per cent of those targeted for vaccination, according to the PA MoH. Of these, 172,916 have received a second dose; 147,170 in the West Bank; and 25,746 in Gaza. Updated figures for the number of Palestinians vaccinated in East Jerusalem based on their Israeli residency status is not available.

The Palestinian National COVID-19 Vaccination Campaign began in March, with the arrival of approximately 60,000 vaccines procured through the Gavi COVAX AMC Facility. Through the same mechanism, another 72,000 doses of Oxford-AstraZenica arrived on 19 April; approximately 110,000 Oxford-AstraZenica vaccines are expected imminently and 100,000 Pfizer BioNTech doses by the end of June. Through COVAX, the Palestinian Authority (PA) is eligible to receive donor-funded vaccines for up to 20 per cent of its population and has applied for more doses to cover an additional 40 per cent of the population from its own budget. On 13 April, 48,000 AstraZeneca vaccines arrived from India, the second consignment of a total of two million vaccines purchased by the PA. (See Vaccine Tracking chart below).

The Israeli authorities are continuing their vaccination programme, which is also available to Palestinians in East Jerusalem, and ranks first globally for per capita vaccinations, with over fifty-four per cent of the population fully vaccinated. A number of Israeli, Palestinian and international health and human rights organizations, as well as Israeli health officials, have called on the Israeli authorities to ensure that vaccines are equally and fairly provided to Palestinians living under occupation in the West Bank and Gaza. On 25 March, six Israeli and Palestinian human rights organizations submitted a petition to the High Court demanding that Israel provides vaccines to Palestinians in the West Bank and Gaza. A reply is expected by 3 May.

Despite a significant decrease in active cases in April, the healthcare system in the West Bank is still struggling with the high numbers of hospital admissions, an ICU bed occupancy of 83 per cent and 40 patients on ventilators. In the southern West Bank, the number of patients in treatment centres witnessed a significant decline, but the occupancy rate in the Nablus treatment centres, including both private and government facilities, was still between 85 and 95 per cent by the end of the month.

On 3 April, the PA announced that West Bank restrictions will continue until 3 May, with restaurants, shops, cafes, businesses, companies and ministries operating at 30 per cent capacity.  On 10 April, the PA announced that for the month of Ramadan, which started on 13 April, shops and restaurants would be allowed to open until 22:00, while the lockdown will continue on Fridays, except for pharmacies and bakeries,

On 11 April, in-person learning resumed for grades 1 to 6 and on 20 April for grades 7 to 11, with vaccination ongoing for teachers.

During the month of Ramadan, the Israeli authorities have allowed entry into East Jerusalem for Friday prayers to all Palestinians aged 55 years and over, if vaccinated and registered on the Israeli MoH database. Those below 55 need a permit, in addition to being fully vaccinated. On the first Friday of Ramadan, 16 April, the Israeli authorities denied entry into East Jerusalem of about 90 per cent of those who had assembled at the Qalandiya, Gilo and Zaytoun checkpoints, reportedly because they did not have a permit or were not fully vaccinated.

East Jerusalem witnessed a significant improvement during April, with just 146 active cases of COVID-19. St. Joseph’s, the main COVID-19 hospital, closed its two coronavirus-dedicated units (50-bed capacity) on 19 April 2021, due to the decreased numbers of patients. As of 21 April, there were only six patients in Al Makased and three patients in Augusta Victoria Hospital. By mid-April, approximately 150,000 residents of East Jerusalem had received their first dose, of whom 130,000 had received their second dose.

Citing the lack of building permits, during April, the Israeli authorities demolished or confiscated 23 Palestinian-owned structures in the West Bank, including East Jerusalem, displacing 13 people, including nine children, and otherwise affected the livelihoods, or access to services, of over 100 others. Of these, 13 were in Area C, including one structure that had been provided as humanitarian assistance. Ten of the structures, or 43 per cent, were confiscated, a practice that has been on the rise in recent years. Since the start of Ramadan, which has traditionally witnessed a decline in demolitions, a total of three structures were seized, significantly lower than the previous two year: 42 in 2020 and 13 in 2019.

In Gaza, 35,882 new COVID-19 cases were recorded in April, with the number of active cases increasing by 58 per cent. The cumulative caseload since the start of the pandemic is 101,470, with 80,000 recovered. 288 people died in April, compared with 28 in March, bringing the overall fatality toll to 899.

In the last week of the month, an average of 2,500 tests were conducted daily, with a positivity rate of 30 per cent.

The overall occupancy rate of COVID-19 dedicated hospital beds in Gaza is 57 per cent, with 334 of 627 beds occupied. Currently, 44 of the 77 ICU beds are occupied, with nine patients requiring ventilation. Some 334 people are in isolation in the designated hospitals, 13,276 are in home isolation and 9,363 in home quarantine.

On 6 April, in response to the surge in active cases, the local authorities imposed a prohibition on vehicular movement on Fridays and Saturdays, and from sunset to 06:00 on weekdays. Schools, universities, wedding halls and weekly open markets were closed until further notice, with all in-person learning still suspended. On 20 April, the authorities imposed a total night lockdown from sunset until 05:00, during which all pedestrian and vehicular movement is prohibited and shops are closed. On 27 April, a compulsory quarantine in designated facilities was imposed on travelers entering Gaza from India and Bangladesh. The authorities also announced that they will take stronger legal measures against violators of home isolation/quarantine, including compulsory quarantine in the Khan Younis Rehabilitation Centre.

For an interactive map of isolation and quarantine facilities in Gaza see the OCHA website.

The Rafah crossing with Egypt remained open, with 5.137 entries and 5,261 exits recorded during the month. The entry of goods continued from Israel through the Israeli Kerem Shalom Crossing with, as it did via the Rafah Crossing with Egypt. On a daily average, since the beginning of 2021, about 80 Palestinians have entered Gaza through the Erez Crossing on working days.

Responses to COVID-19 related needs during 2021 have been mainstreamed in virtually all humanitarian activities planned for the year and included in the 2021 Humanitarian Response Plan for the oPt. The Plan requires $417 million in order to deliver assistance to 1.8 million Palestinians in the Gaza Strip and West Bank, including East Jerusalem.  An additional $36,821,796 has been requested to cover needs from April to December 2021, in light of the recent surge in infections.

In early February, it was agreed that the Inter-Agency COVID-19 Task Force, led by the Resident/Humanitarian Coordinator (RC/HC), would be convened on an ‘as needed’ basis and that response to COVID-19 should be incorporated into the key strategic decision making forums of the Humanitarian Country Team and the Humanitarian Country Team Plus Meetings as well as the UN Country Team as a standing agenda item. If there is a significant change in the context demanding a specific response, an ad hoc Task Force Meeting will be convened. In the meantime, the sub national Inter-Cluster Coordination Groups in both Gaza and the West Bank, continue to convene regularly, to coordinate the implementation of various responses to the crisis.

In April, the RC/HC’s Access Coordination Unit (ACU) facilitated 22 UN and diplomatic missions into and out of Gaza.

Due to tightened restrictions in April by the local authorities in Gaza, including restrictions on vehicular movement at weekends, the ACU coordinated a total of 155 critical UN and NGO missions.

After extensive negotiations with the Israeli authorities following the airport closure in January, from 8 April, the ACU succeeded in restarting the ad-hoc mechanism for International NGO staff members to enter Israel. Since then, INGOs submitted requests for 58 staff members/dependents, of which 33 were approved and the people concerned have arrived, 24 are in process, and one has been denied. The ACU continues to negotiate with the Israeli authorities regarding the reopening of crossings to international staff without conditions.

The Health Cluster is tracking the procurement and delivery of critical medical supplies by cluster partners against the needs identified in the 2021 Humanitarian Response Plan. The table below highlights the availability and gaps regarding the most important medical items needed. All partners are encouraged to subscribe and submit their requests for procurement of medical supplies for laboratory testing, case management and infection prevention and control through WHO’s global COVID-19 response coordination portal.

The national Risk Communication and Community Engagement (RCCE) campaign continues to target media outlets and governorates with COVID-19 messaging, aimed at promoting adherence to public health measures, including face covering, hand-washing, physical distancing, and avoiding mass gatherings. In addition, following the roll-out of the mass vaccination campaign, the focus of RCCE messaging has broadened to include information about vaccines and the importance of vaccination, in an effort to increase demand for vaccination on the part of the population. Messaging continues to be conducted via the distribution of brochures, text messaging, daily radio advertising and sharing of influencer videos. RCCE materials are available online. 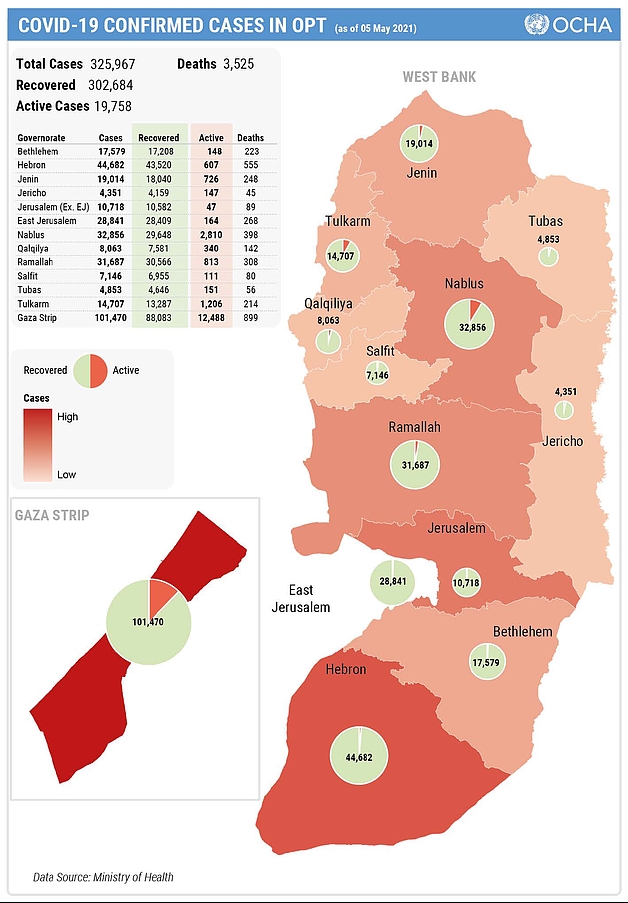