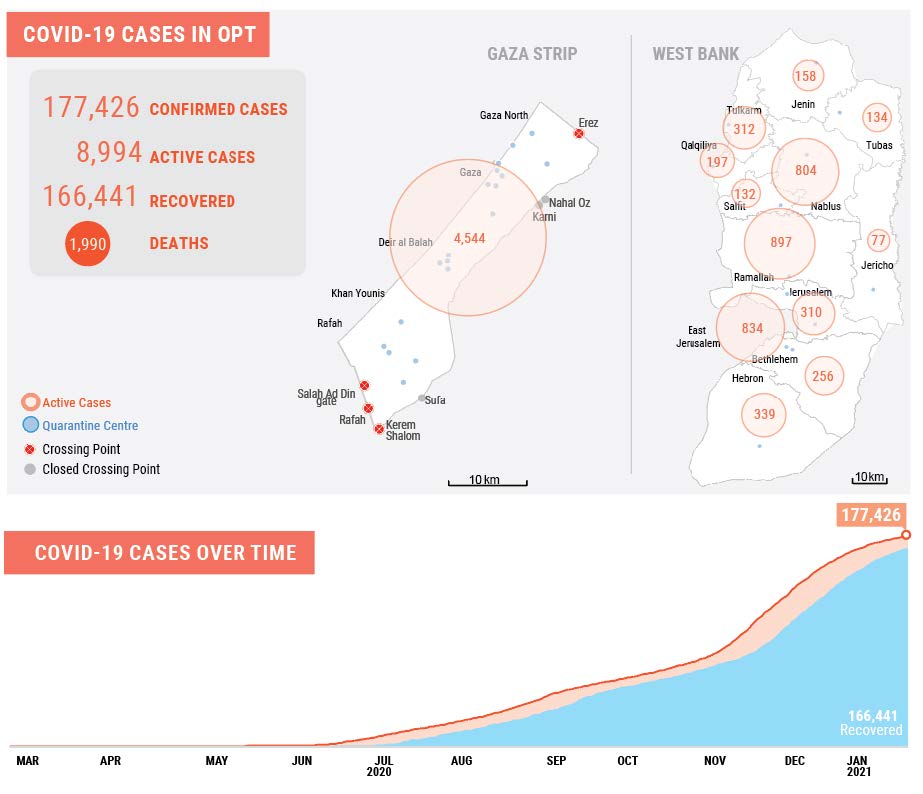 The reporting period witnessed a 37 per cent decrease in active COVID-19 cases in the oPt, with 8,810 additional Palestinians testing positive, and 13,957 people recovering, according to the Palestinian Ministry of Health (MoH). The cumulative number of cases is 177,426, with 166,441 people recovered from the virus. The number of patients in intensive care units (ICU) continues to decline from 93 at the end of the previous reporting period, to 64, including those requiring mechanical ventilation, decreasing from 25 to 18.

A total of 176 people died, bringing to 1,990 the cumulative number of fatalities due to the virus, 1,473 in the West Bank, including East Jerusalem, and 517 in the Gaza Strip. The Case Fatality Rate (CFR), the proportion of deaths among confirmed cases, remains at 1.1 per cent in the oPt, slightly above Israel (0.75), but lower than Jordan (1.3 per cent), and Egypt (5.5 per cent).

In response to the decrease in infections, the authorities in Gaza have eased public health restrictions at the weekends.  In the West Bank (excluding East Jerusalem), the lockdown regulations that entered into effect on 2 January have been extended until 1 February. The Israeli authorities have also extended the current lockdown until at least 31 January, with these measures also applying to occupied East Jerusalem. Additional restrictions have been adopted, include prohibiting all incoming and outgoing passenger flights to and from Israel, from midnight 26 January, and closing the land crossings with Egypt and Jordan from 06:00 28 January until 17:00, 31 January.

On 25 January, all public schools in the oPt re-opened for Grades 7 to 11, adopting a blended approach of face-to-face and distance learning; Grades 1-6 returned on 6 January. UNRWA has decided not to reopen its schools, and to continue with distance learning only.

The Palestinian Authority (PA) will receive support through the Gavi COVAX AMC Facility for an allocation of COVID-19 vaccines to cover 20 per cent of the oPt population. The PA has also submitted an expression of interest  for a potential small scale ‘first wave’ deployment of the Pfizer vaccine, to cover an estimated 0.25 per cent of the population, prioritizing frontline health workers. In parallel, the PA has been negotiating with pharmaceutical companies and various countries to secure additional vaccines, including Russia’s Sputnik V COVID-19 vaccine.

The MoH, with the support of WHO and UNICEF, is finalizing its national vaccination plan. In Gaza, a local Task Force is preparing lists of priority groups, including health workers and those above 65 years with underlying health conditions. The Health Cluster reports that there is enough cold-chain storage capacity for anticipated vaccines, including Pfizer; the main concern remains rapid and equitable access to sufficient vaccines.

Israel is continuing its vaccination programme, which is available to Palestinians in East Jerusalem, and currently ranks first globally for per capita vaccinations, with over 2.5 million people already vaccinated with the first dose. A number of Israeli, Palestinian and international health and human rights organizations, including Amnesty International, have called on the Israeli authorities to ensure that vaccines are equally and fairly provided to Palestinians living under  occupation in the West Bank and Gaza. In his briefing to the UN Security Council on 26 January, the new Special Coordinator for the Middle East Peace Process, Tor Wennesland, credited Israel with working closely with the UN and its partners during the pandemic to ensure that equipment and supplies have been delivered throughout the occupied West Bank, including East Jerusalem, and Gaza. He further noted that ‘it is important that the same level of engagement and cooperation be sustained with regard to the delivery of vaccines.”

On 21 January, the Israeli Prison Service announced that it had finished vaccinating the country's prison population. This followed a petition to the Israeli High Court of Justice on 10 January, by five Israeli human rights organizations against the decision by the Public Security Minister not to vaccinate prisoners, contrary to the Israeli Ministry of Health’s directive.

The number of active cases in the West Bank, including East Jerusalem, decreased by almost 37 per cent in the reporting period (from 7,011 to 4,450). Despite this, the current lockdown, in areas beyond East Jerusalem, has been extended until 1 February, including the night curfew from 19:00 to 06:00, as well as a weekend lockdown, from Thursday 19:00 to Sunday 06:00, with exceptions permitted for essential services. The prohibition on travel between governorates remains in place, although with little enforcement noted.

In East Jerusalem, where residents are eligible for the vaccine has according to current Israeli regulations, there has been an increase in those availing of the service. There has also been a noticeable enforcement of lockdown measures, with increased checkpoints, including on Fridays, where only residents of the Old City were permitted to access the Haram al-Sharif/Temple Mount compound for prayers, with other Muslim worshippers prohibited. On 17 January, the Israeli authorities extended the closure of the Ibrahimi Mosque, in the Israeli-controlled are of Hebron city (H2), to Muslim worshippers and visitors.

In the southern West Bank, Palestinian labourers are being prevented from entering Israel through the official checkpoints, with the exception of Tarqumiya checkpoint (Hebron) for those working in specific sectors. Those trying to enter Israel through breeches in the Barrier are being turned back. On 11 January, Israeli forces opened live fire at Palestinian workers trying to enter Israel through an opening in the Barrier, south of Tulkarm, injuring eight men. On 17 January, Israeli forces used tear gas to stop workers trying to cross near the Meitar checkpoint into Israel, resulting in several cases of inhalation. Israeli forces also fined workers who were apprehended and cancelled permits in some cases. On 25 January, a Palestinian worker reportedly died of a heart attack after Israeli forces fired tear gas at him while he attempted to cross the Barrier into Israel near Tulkarm, according to Palestinian health officials; a similar incident resulting in the death of a man was recorded on 18 September 2020 in the Jenin governorate.

Citing the lack of building permits, during the reporting period, the Israeli authorities demolished or seized at least 22 Palestinian-owned structures in the West Bank, including East Jerusalem, displacing at least five people.

On 25 January, the Israeli authorities dismantled and confiscated parts of a residential structure and a mobile latrine provided as humanitarian assistance, in addition to demolishing a water reservoir, in Al Lubban ash Sharqiya village, Nablus. The incident took place on the basis of lacking an Israeli building permit in an archaeological site in Area C. The displaced family of five is repeatedly subject to attacks by Israeli settlers. On 27 January, in Khan Al Ahmar Abu Falah community in the Jerusalem governorate, Area C, the Israeli authorities confiscated an agricultural structure, affecting the livelihoods of six Palestinians, including two children. According to the affected family, the Israeli authorities provided no confiscation order, but issued a verbal warning two weeks prior to the incident.

In Gaza, 4,115 new COVID-19 cases were recorded in the reporting period. However, the number of active cases declined by around 38 per cent (from 7,323 to 4,544), dropping to below 5,000 for the first time since mid-November. The cumulative caseload since the start of the pandemic has reached 50,639, the vast majority since the first cases of community transmission were reported in late August. Fifty-five (55) people died, bringing the overall death toll to 517.

According to WHO, during the period 17-23 January, daily positivity rates have dropped to 13.6 per cent, compared with 17.4 per cent in the previous week. Occupancy rates for high dependency and ICU beds, as well as for beds for mild/moderate cases, are now below 30 per cent. According to the Ministry of Social Development (MoSD), the number of people in isolation facilities has decreased from 1,400 in the last reporting period to less than 1,000, and the number of people in home isolation from 6,000 to fewer than 4,000 in the same period. The number of people in home quarantine has also decreased from 26,000 to 16,000, the majority residing in the Gaza and Khan Younis governorates, where most of the high-risk ‘red areas’ are located; the overall number of ‘red areas’ decreased from 39 on 12 January to 22.

For an interactive map of isolation and quarantine facilities in Gaza see the OCHA’S WEBSITE.

The local authorities have eased some restrictions by partially lifting the lockdown on weekends. People are now permitted to go out in public on Fridays and Saturdays, but all vehicular movements continue to be prohibited. Bakeries and pharmacies are also allowed to open on weekends, and mosques have reopened completely. Shops and markets, however, remain closed on weekends. The night curfew remains in place.

Public and private schools have reopened for Grades 7 to 11, applying the blended learning approach, with pupils spending two days per week at the school and the remaining 3 days learning at home. UNRWA schools will continue to apply remote learning until the end of the first semester, at the end of January.  The reopening of kindergartens is also permitted, with strict adherence to COVID-19 measures.

On a daily average, since the beginning of 2021, around 80 Palestinians enter Gaza through the Erez Crossing on working days. There is no indication concerning the next opening of the Rafah Crossing with Egypt, which last opened between 24 and 26 November 2020. According to local authorities, over 8,000 people, including patients and students are registered to exit Gaza, while hundreds of Gazan residents are reportedly stranded outside Gaza, mainly in Egypt, waiting to cross into Gaza. The entry of goods continued from Israel through the Kerem Shalom Crossing, as did imports from Egypt via the Rafah Crossing.

Responses to COVID-19 related needs during 2021 have been mainstreamed in virtually all humanitarian activities planned for the year and included in the 2021 Humanitarian Response Plan for the oPt. The Plan appeals for US$417 million in order to deliver urgent assistance to 1.8 million Palestinians in the Gaza Strip and West Bank, including East Jerusalem.

The Inter-Agency COVID-19 Task Force, led by the interim Resident/Humanitarian Coordinator (RC/HC), as well as the sub national Inter-Cluster Coordination Group (ICCG), continues to convene regularly, to set policies and coordinate the implementation of various responses to the crisis.

During the reporting period, the RC/HC’s Access and Coordination Unit (ACU) facilitated the movement of 137 UN and 45 international NGO staff, and one diplomatic mission, between East Jerusalem and the remainder of the West Bank, in addition to 12 trucks with medical, education and other vital equipment. Due to the continuing restrictions in the Gaza Strip, the ACU coordinated 49 critical UN missions with the local authorities, in addition to facilitating eight UN and eight diplomatic missions into and out of Gaza. The ACU also facilitated the entry into Israel of 24 international NGO staff members and their dependents.

The Health Cluster is tracking the procurement and delivery of critical medical supplies by cluster partners against the immediate needs identified in the COVID-19 Inter-Agency Response Plan, in line with the State of Palestine’s National Response Plan. The table below highlights the availability and gaps regarding the top ten medical items needed.

All partners are encouraged to subscribe and submit their requests for procurement of medical supplies for laboratory testing, case management and infection prevention and control through WHO’s global COVID-19 response coordination portal.
The Risk Communication and Community Engagement (RCCE) campaign continues to target media outlets in COVID-19 hotspots to encourage people to follow protective measures. The RCCE Task Force, led by the MoH, WHO and UNICEF, is developing a social mobilization and engagement strategy/demand plan and information awareness programme to generate confidence, acceptance and demand for COVID-19 vaccines in the oPt, once they become available. RCCE materials are available online. 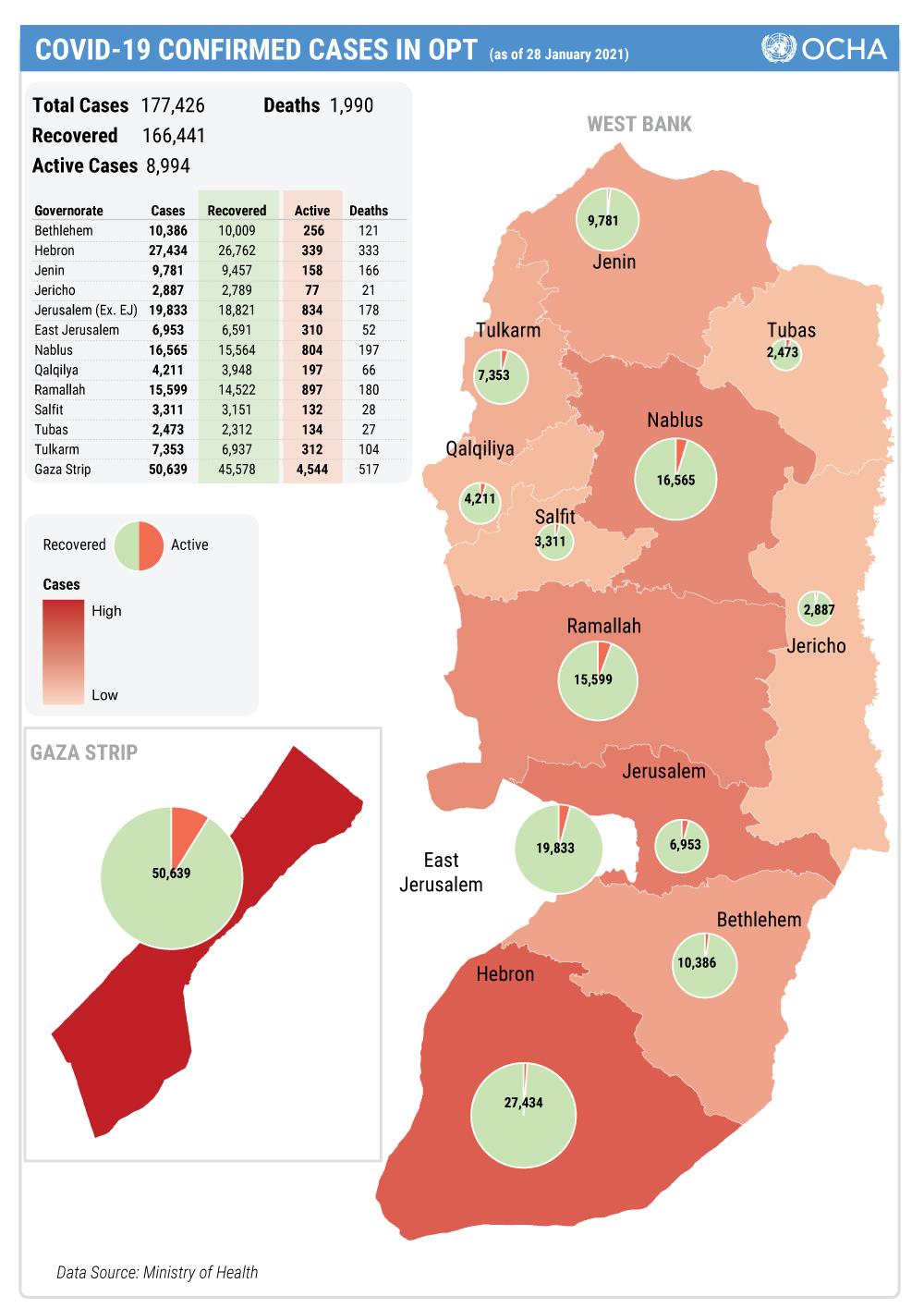