On 23 May, the Israeli authorities resumed the import of cement to the private sector in Gaza after a 45-day suspension. In a statement welcoming the resumption, the UN Special Coordinator for the Middle East Peace Process, Nickolay Mladenov, stated that “all sides need to ensure that cement deliveries reach their intended beneficiaries and are used solely for civilian purposes.”

The Israeli authorities had suspended the import of cement for the private sector on 3 April, following a diversion of cement from the legitimate intended beneficiaries. These restrictions were reconfirmed on 18 April following the announcement of the discovery of a tunnel running from Gaza into Israel, the first found since the 2014 conflict. Although steps were taken to address these concerns, heightened tensions in Gaza and southern Israel, and the discovery of a second tunnel in early May, impeded negotiations. 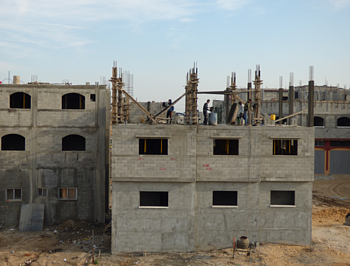 Following a sweeping ban imposed since the imposition of the blockade in June 2007, the controlled import of cement into Gaza for the private sector resumed in October 2014 as part of the Gaza Reconstruction Mechanism (GRM). The GRM is a temporary agreement between the Government of Palestine and the Government of Israel, brokered by the United Nations (See box). Over 680,000 tonnes of cement have since entered Gaza through the GRM. Of these, 66 per cent has entered since the introduction of the “residential stream” in July 2015, for the construction of totally destroyed homes and the construction of new housing.

A limited quantity of cement remained available, estimated at about a third of previous monthly imports. The GRM “shelter” and “residential” streams are essential for donor-funded projects that employ a self-help methodology, in which house owners and communities participate in the reconstruction of their own property, making use of contractors only for the construction of multiple owner multi-storey buildings or for infrastructure projects. The self-help approach is being utilised to repair almost all the damaged units and to reconstruct some 73 per cent (3,760 of 5,163) of the destroyed units that have already been completed, are in progress or have identified funding.

By the end of April 2016, about 23 per cent (4,065) of the approximately 18,000 homes destroyed or severely damaged during the 2014 hostilities had been reconstructed or repaired, following cash assistance from UN agencies or other international support.[1] An estimated 70,000 people remain displaced. According to the Palestinian Contractors’ Union, the shortage of cement had disrupted the jobs of 40,000 people working in the construction sector.

The UN continues to call for a full lifting of the blockade of Gaza within the framework of Security Council Resolution 1860 (2009). In the meantime, the Gaza Reconstruction Mechanism serves as a temporary mechanism to enable the import of otherwise restricted materials, including for private individuals in Gaza without access to external markets. By the end of April 2016, close to 101,000 households had purchased materials through the GRM to repair houses damaged in the conflict, and 2,150 had purchased materials to rebuild homes that were completely destroyed. Unrelated to the 2014 conflict, some 8,100 households have purchased materials to build new houses or to finish the construction of houses begun before the 2014 conflict. The GRM also facilitates access to materials for larger projects, including schools, hospitals, roads, water infrastructure, private businesses, public service facilities and large-scale residential projects. To date, 870 such projects have been introduced into the GRM, of which 105 have been completed.

* This section is based on a contribution by the Shelter Cluster