as part of
The Monthly Humanitarian Bulletin | July 2016

Other easing of restrictions cancelled after fatal attack in Tel Aviv

Since 2008, the Israeli authorities have introduced aged-based criteria during the month of Ramadan that allow Palestinians holding West Bank ID cards to access Al Aqsa Mosque in East Jerusalem for Friday prayers in lieu of the normal permit requirements. The criteria differ slightly every year but in 2013, 2015 and 2016 all Palestinian women, irrespective of age, were allowed to enter East Jerusalem for Friday prayers. In 2016, access for men was limited to males under 12 and above 45 years of age. 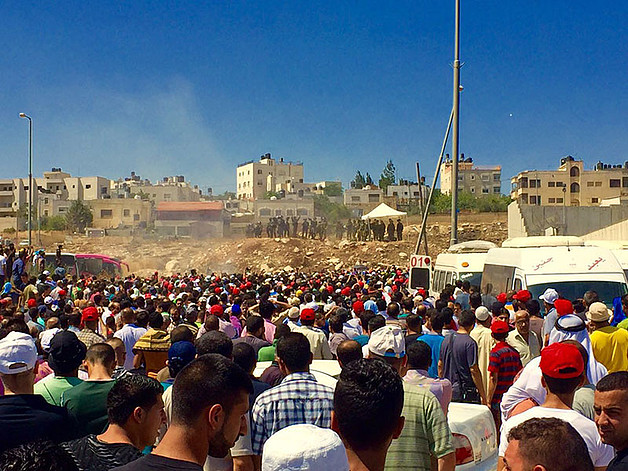 Every year, Ramadan-related family visitation permits have also been issued to allow West Bank ID holders to access East Jerusalem during Ramadan and the feast of Eid Al Fitr; these permits are generally valid on all days except Fridays and Saturdays. West Bank Palestinians outside the declared age limit have also been able to apply for Friday prayer permits. On 9 June this year, permits issued for both categories – estimated at around 83,000 – were frozen by the Israeli authorities following a shooting attack on the previous day in Tel Aviv in which four Israelis died, and just a few days after the month of Ramadan began on 6 June.

According to official figures by the Israeli Civil Administration (ICA), around 300,000 Palestinians who hold West Bank ID cards and meet the access criteria set by the ICA entered East Jerusalem during Ramadan through three main Barrier checkpoints: Qalandiya, Gilo and Az Zeitun (See Graph 1 for a comparison with previous years). 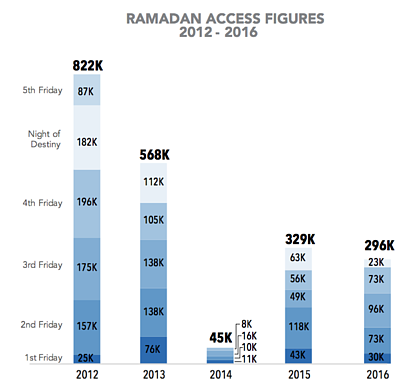 The Israeli authorities also put in place arrangements at checkpoints to facilitate access for thousands of Palestinians, including the designation of separate lanes for men and women, and special lanes for humanitarian cases; reducing overcrowding on the East Jerusalem side of checkpoints by improving the process of purchasing tickets and embarking on buses; and improving the flow of people inside the Old City of Jerusalem.

Nevertheless, three significant concerns arose this year in the operation of the checkpoints. First, there were no clear instructions about who was eligible to use the humanitarian lanes, usually designated for the elderly and the infirm. At the Qalandiya checkpoint, the men’s humanitarian lane was often inaccessible due to overcrowding.

Second, on the third Friday of Ramadan, there were at least two occasions when Israeli forces allowed men of all ages to cross Qalandiya checkpoint, only to turn some of them back as they boarded buses on the grounds that they did not meet the age criteria. This problem aggravated overcrowding on the men’s side of the Qalandiya checkpoint on the fourth Friday of Ramadan (1 July), where a significantly higher number of men under 45 years of age had queued in hopes of crossing due to more relaxed arrangements introduced the previous week.

On the fourth and final Friday of Ramadan, Israeli forces regularly fired tear gas canisters and sound grenades at the queuing crowds and ordered men under 45 years of age to turn back. Some cases of stone-throwing by Palestinians were also reported. According to Palestinian medical sources, a 63-year-old Palestinian from Nablus was killed as a result of tear gas inhalation and 21 Palestinians were injured (18 as a result of tear gas inhalation and three by sound grenades). One Israeli soldier was also reportedly injured by a stone. On one occasion during this unrest, Israeli forces opened Qalandiya checkpoint to men of all ages, then closed it again and resumed the firing of tear gas and sound grenades.

The third concern is that, for the first time, Israeli forces staffing Shu’fat checkpoint did not allow West Bank Palestinians with Anata and Shu’fat addresses and who met the age criteria to cross. This is in line with a new ICA policy effective since December 2015 that only allows East Jerusalem ID holders to use this checkpoint. The new policy is not widely known and resulted in multiple cases of elderly Palestinians from Anata and Shu’fat being systematically denied access at Shu’fat checkpoint, forcing them to divert to Zeitun checkpoint (20 kilometres away) or Qalandiya checkpoint (13 kilometres).

Following two Palestinian attacks in the Hebron governorate on 30 June and 1 July, which killed two Israeli settlers (including a girl), Israeli forces blocked several junctions leading to and from villages and towns throughout the governorate, including Hebron city itself.. As a result, the access to services and livelihoods by residents of the Hebron governorate (~700,000) were impacted to various degrees, due to the restrictions on Hebron city, which functions as a service hub. Most these closures were gradually removed toward the end of July. In his briefing to the Security Council on 12 July, the UN Secretary-General, declared that “those responsible for recent terror attacks must be held accountable.  However, closures – such as those in Hebron -- as well as punitive demolitions and blanket revocations of permits penalise thousands of innocent Palestinians and amount to collective punishment.”

As has been the case for the past eight years, UNOCHA coordinated the field monitoring of checkpoints which control movement of Palestinians to East Jerusalem during the four Fridays of Ramadan this year, in cooperation with other humanitarian partners. The purpose is to monitor freedom of worship and access to religious sites in Jerusalem; to identify risks and mitigation measures for the most vulnerable; and contribute to UNOCHA’s analysis of broader access trends. Monitoring took place on both sides of the following checkpoints: Qalandiya, Gilo/Bethlehem, Zeitun and Shu'fat, as well as in the Old City of Jerusalem.

Since October 2014, a limited number of Palestinians from Gaza, generally over 60 years of age, have also been allowed to perform Friday prayers at Al Aqsa Mosque during Ramadan. This year, a number of relaxation measures for Fridays in Ramadan were also announced for Gaza residents, including 500 permits for those over 50 years of age, 300 permits for prayer in Al Aqsa Mosque from Sundays to Thursdays, and an additional 800 permits with the same age criteria for the night of Laylat al-Qadr. Following the fatal attack in Tel Aviv on 9 June, these measures were suspended. The existing quota of approximately 300 people from Gaza over the age of 60 permitted to pray at Al-Aqsa on Fridays throughout the year since October 2014 was maintained throughout the month, except for 11 June when no access from Gaza was permitted. As the Egyptian-controlled Rafah crossing also remained closed for most of Ramadan, those hoping to make the pilgrimage to Mecca were prevented from crossing.