In the occupied Palestinian territory (oPt), as elsewhere, women, men, boys and girls may have different humanitarian needs and vulnerabilities based on their gender. Israel’s policies in the oPt restrict and affect these groups in different ways, and gender roles and relations in Palestinian society determine varying levels of access to resources and opportunities. Relevant factors that determine the different impacts of occupation include types of human rights violations, livelihood-related vulnerabilities, gender-based division of labour, discriminatory norms and possible gender bias in the design of humanitarian assistance. Additionally, the intra-Palestinian divide and the limited authority exercised by the State of Palestine in Gaza, Area C and East Jerusalem compound gaps in legal protection for women. The humanitarian community in the oPt collects sex-disaggregated data in order to refine the identification of needs, address gender-based vulnerabilities and ensure an equitable and effective humanitarian response. 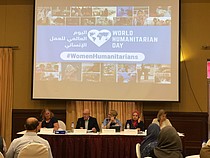 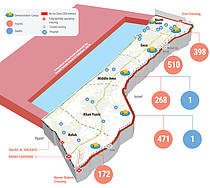 The impact of violence and casualties incurred during Gaza’s Great March of Return (GMR) demonstrations differs by sex due to social norms. Between May and June 2018, UNFPA carried out a rapid assessment to identify the specific impact of the GMR on Palestinian women and girls. It consisted of five focus discussions and ten in-depth structured interviews. Each focus group was composed of women who participated in or were directly affected by the demonstrations, along with female representatives of institutions providing social services to women.

An oPt Humanitarian Fund success story: Miassar Zo’orb is a 48-year-old widowed mother who lives with four of her children in Khan Younis. She is the only breadwinner for her family, and her main income comes from humanitarian aid. Her home consists of two bedrooms, one bathroom, a kitchen and a living room, and it is footsteps away from the local waste dump.

Humanitarian Coordinator, WHO, OHCHR and OCHA call for the protection of medical workers. United Nations officials and agencies have expressed their outrage in the face of yesterday’s killing of Razan An Najjar, a 21-year-old female volunteering as a first responder, while carrying out her humanitarian duties with the Palestinian Medical Relief Society (PMRS). Razan was hit by live ammunition fired by Israeli forces while trying, with other first responders, to reach those injured during the ‘Great March of Return’ demonstrations close to Israel’s perimeter fence around 18:30. She was taken immediately to a trauma stabilization point, and then to the European Gaza Hospital, where she died just after 19:00. Three others in her team were also injured. 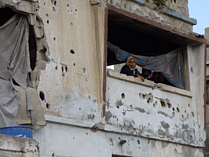