Palestinian civilians across the occupied Palestinian territory (oPt) are subject to threats to their lives and physical safety from conflict-related violence, and from policies and practices related to the Israeli occupation, including settler violence. In the Gaza Strip, three large rounds of hostilities between Palestinian armed groups and Israel since 2008, have left thousands of civilian deaths and injuries. In the West Bank, casualties have also been on the rise in recent years, mainly in the context of confrontations with Israeli forces and increasing frustration over continued occupation. Throughout the oPt, concerns have been raised over excessive use of force. Although the specific contexts in which civilians are killed or injured varies, there is a pervasive crisis of accountability, with no effective remedy for the vast majority of alleged violations of international law, to ensure justice for the victims and to prevent future violations.

OCHA monitors casualties in its Protection of Civilians reports.

“I have been fishing since I was ten years old and fishing is the only source of income for my wife, myself and our 10 children,” said Fadi, a 44-year-old fisher from Gaza city.

On 1 April 2019, the Israeli authorities expanded the permissible fishing area along the southern and central parts of Gaza’s coast from six up to 15 nautical miles (NM) offshore, the furthest distance that Gaza’s fishers have been permitted to access since 2000. Access to the northern areas along the coast remain more limited at up to 6 NM, well below the 20 NM agreed under the Oslo Accords

The annual olive harvest, which takes place every year between October and November, is a key economic, social and cultural event for Palestinians. In the West Bank, more than 10 million olive trees are cultivated on approximately 86,000 hectares of land, representing 47 per cent of the total cultivated agricultural area. Between 80,000 and 100,000 families are said to rely on olives and olive oil for primary or secondary sources of income, and the sector employs large numbers of unskilled laborers and more than 15 per cent of working women. According to the Food and Agriculture Organization (FAO), the olive oil yield for the West Bank in 2019 is estimated to reach a record 27,000 tons, which is an 84 per cent increase over the previous year. The estimated record yield this year is due to the alternate fruit-bearing “on and off seasons” and less infestation by the olive fruit fly during the current season. 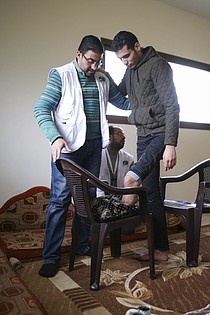 An oPt Humanitarian Fund success story: Ahmed Badawi is a 48-year-old farmer, who provides for his wife and nine children. The family owns about two acres of land, located 400 metres from Israel’s perimeter fence with Gaza, in the Ash Shuja’iyeh of the Gaza Strip. For many years, Israel has restricted the access of Palestinians to areas near the fence, undermining farming. In addition, since 30 March 2018, Palestinians have been demonstrating there, on an almost-weekly basis, as part of the ‘Great March of Return’ (GMR), causing damage to crops in the process. 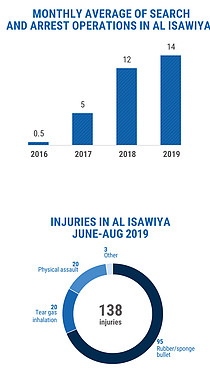 Years of blockade and other movement restrictions on people and materials, including medical resources, the deepening intra-Palestinian political divide, and a chronic energy crisis, have led to a serious deterioration in the availability and quality of health services in the Gaza Strip. The Gaza health sector suffers from chronic shortages of certain equipment and supplies, including antibiotics and chemotherapy drug stocks. According to the World Health Organization (WHO), there has also been a serious deterioration in the “social determinants of health”, with “water from the aquifer basically unfit for human consumption, sewage flows largely untreated into the Mediterranean and the economy is stifled.” 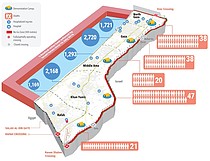 Humanitarian snapshot: casualties in the context of demonstrations and hostilities in Gaza | 30 March - 2 August 2018 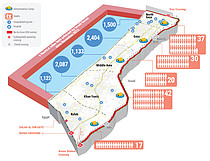 Humanitarian snapshot: casualties in the context of demonstrations and hostilities in Gaza | 30 March - 12 July 2018 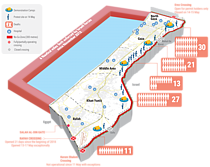 Humanitarian snapshot: mass casualties in the context of demonstrations in the Gaza Strip

Humanitarian snapshot: mass casualties in the context of demonstrations in the Gaza strip 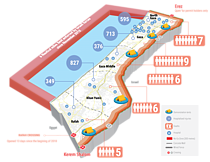 Humanitarian Snapshot: Mass casualties in the context of demonstrations in the Gaza Strip

Casualties in the occupied Palestinian territory and Israel, 1 October - 30 November 2015